Picture this: You’re on the hunt for an affordable apartment in New York City — the priciest city of them all.

A listing price that hovers $350,000 is within your range. That’s about the median price for a home in Chicago, which ranks 37th among the most expensive cities.

You search and search and — bam. You find an apartment going for $349,000. It touts two bedrooms, two full bathrooms and it’s in a pet-friendly luxury building on 57th Street.

Amenities abound. There’s a resort-style stall shower; a home office; a washer/dryer and plenty of shelving which could easily become a walk-in closet; and the kitchen provides plenty of counter space for cooking.

Oh and Central Park is basically your backyard.

Punch in the numbers using a mortgage calculator and your hypothetical monthly payments come out to about $3,780. Not bad, considering a two bed, two bath rental on West 56th St. in Hell’s Kitchen could cost north of $6,000 a month.

So you call the seller’s agent. Turns out the listing has been on the market for almost 700 days. And the price is down almost 13% from the previous year. WTF. 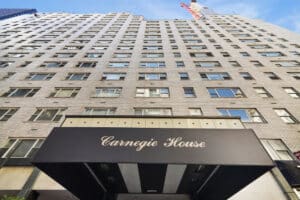 Buildings on privately-held land, however, are different.

Take the Carnegie House, for example. This co-op, located at 100 57th Street, has “an unusual ownership situation,” per The Real Deal. Residents are selling “in droves” because they — as shareholders of the 21-story co-op — don’t own the land beneath the building.

Therefore, they must pay inflated co-op association dues as “rent” to the investors who do — David Werner and Rubin Schron. In 2014, the duo paid $285 million for the land under Carnegie House.

Now, the lease may come up for re-negotiation every 100 years or so.

But with Carnegie House, the land is currently being re-assessed. According to one broker I spoke with, the price of the rent that’s collected for the land will likely see an exorbitant spike in four years.

Add onto that a sharp rise in maintenance costs—charges well above the market—and it makes it difficult to hold onto the unit.

So while inking a deal now may feel like a steal at first, it won’t last. Essentially, the asking price is lower to offset the higher mortgage costs and the buyer would end up having to essentially pay for a million-dollar apartment, the broker adds.

“Land leases suck. Especially when they are coming to an end and need to be negotiated.”

If the landowners, the consortium of Werner and Schron, decide to sell the land, they can possibly evict the building’s tenants (though that doesn’t typically happen).

What does happen, though, is the co-op owner essentially becomes a tenant. And since they pay rent, they don’t pay property taxes. Unlike other co-op owners, they can’t deduct as much of their monthly charges

“Land leases suck,” another broker says. “Especially when they are coming to an end and need to be negotiated.”

The land-lease scenario isn’t exclusive to Carnegie House. In fact, there are about 100 buildings currently sit on privately-held land in NYC. A majority of them are in Manhattan.

The Excelsior, a Carnegie House neighbor at 303 East 57th Street, is another example. Every 10 years, the rent resets to 6% of the value of the land. The co-op last reset in 2018, according to the New York Times.

“With prices rising, particularly along 57th Street, where a dozen luxury towers are underway, shareholders are growing anxious that the land rent could rise precipitously,” the report continues.

So, if you’re ever browsing RealtyHop and come across a 2 bedroom, 2 bathroom co-op with a price within striking distance to a studio, conduct some due diligence. Check the maintenance costs. Determine if it’s saddled with a land-lease agreement.

If it feels right for you and your situation — great. If not, there are plenty of other listings to consider.

8 Tips to Successfully Sell Your Home For More