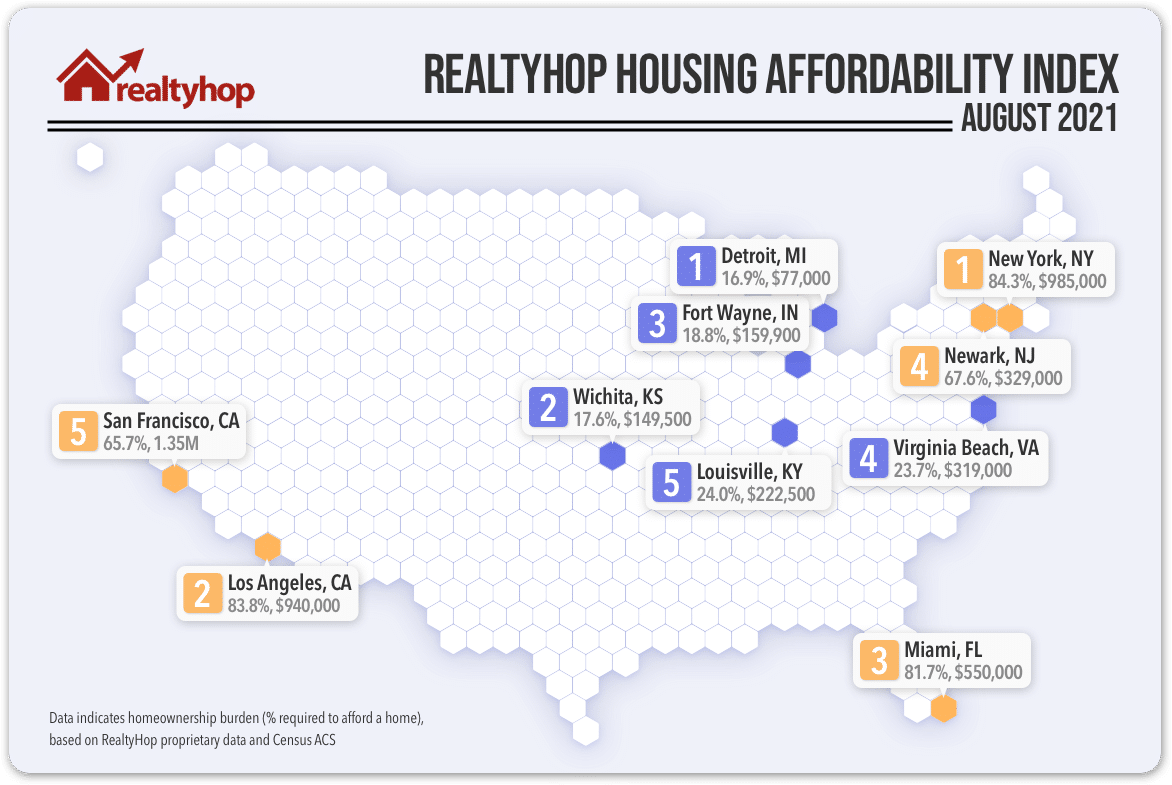 Each month, we ask a question:

Is homeownership affordable or even possible for the average family in America?

The answer can be found in the RealtyHop Housing Affordability Index. For the August 2021 edition, we studied proprietary RealtyHop analytics and comprehensive U.S. Census data to determine the current circumstances of buying a home in the 100 most populous cities across the U.S. This month, 66% of the cities became less affordable – The share of income for homeownership increased in 66 of the 100 cities in our index.

Compare and contrast your city’s affordability to others:

1. For the second time since RealtyHop started tracking housing affordability in the U.S. in February 2019, New York, NY is the least affordable housing market. With median real estate asking $985,000, a family in New York City would need to set aside 84.3% of their annual $64,000 income to own — just a 0.5% month-over-month decrease from the previous report.

2. Los Angeles, CA is once again the second least affordable housing market. With a median asking price of $940,000, an average L.A. family making $62,000 a year would need to allocate 84% of their annual income toward monthly mortgage payments and property taxes. That’s only a 0.53% month-over-month decrease from July.

3. Miami, FL is still the third most cost-burdened city. Given the median asking price of $550,000 and household income of $39,049, a household in the so-called “Magic City” would need to contribute almost 82% of annual income toward homeownership costs.

4. Newark, NJ maintains its position as the fourth most expensive housing market in the nation, with median real estate prices hitting $329,000 this month. In order to own, an average household making $35,199 would need to spend 67.6% of their annual income towards homeownership costs.

5. San Francisco, CA continues to be one of the most expensive housing markets in the U.S. With an annual income of about $112,449, median homebuyers should expect to spend 65.7% of their annual income in order to own a $1.4 million home in the city.

1. Detroit, MI is still the most affordable U.S. market but got a tad more expensive from where it was in July. Median asking prices increased 2.7% to $77,000. Given household incomes of $30,894, a Motor City family would have to set aside just under 17% of their income to pay for housing costs.

2. Wichita, KS was the second most affordable city in the nation. With a median asking price of $149,000, a family in Wichita would only need to put 17.6% of their annual income of $52,620 toward homeownership costs.

3. Fort Wayne, IN remained the third least cost-burdened housing market in the U.S. The city’s median list price hit $159,900, a 6.6% month-over-month increase. Household incomes remained at $49,411. That means a Fort Wayne family puts 18.8% of their income toward housing costs.

4. Virginia Beach, VA is still the fourth most affordable U.S. city this August. Since household incomes continue to hover at $76,610, and median real estate values have gone up about 3% — to $319,000 — an average family in Virginia Beach needs to spend roughly 23.7% of their annual income on housing.

5. Louisville, KY bumped Chesapeake, VA from the top 5 this month (Chesapeake had squeaked past Louisville last month). The median list price for Louisville currently sits at $222,500. Families making $53,436 a year and looking to buy should expect to spend 24% of their annual income, toward monthly mortgage payments and taxes.

Pittsburgh, PA became more affordable in recent months after prices spiked this past month. Home prices saw a 3.5% month-over-month decrease to $250,000 this August. The Steel City went from being the 54th least affordable city to the 60th with an annual family income hovering $48,711.

Milwaukee, WI became more expensive. The Cream City increased seven spots to take 65th place on our affordability ranking. With a median asking price of $175,000 and a household income of $41,838, a family should set aside 30.4% of their income toward mortgage and property taxes.

St. Paul, MN got more affordable. The Queen City dipped five spots and now ranks 79th. The median asking price for this August hit $259,900. A family in St. Paul making a median income of $57,876 should expect to spend about 28% of their income on homeownership.

Last Updated on 5 months by alex