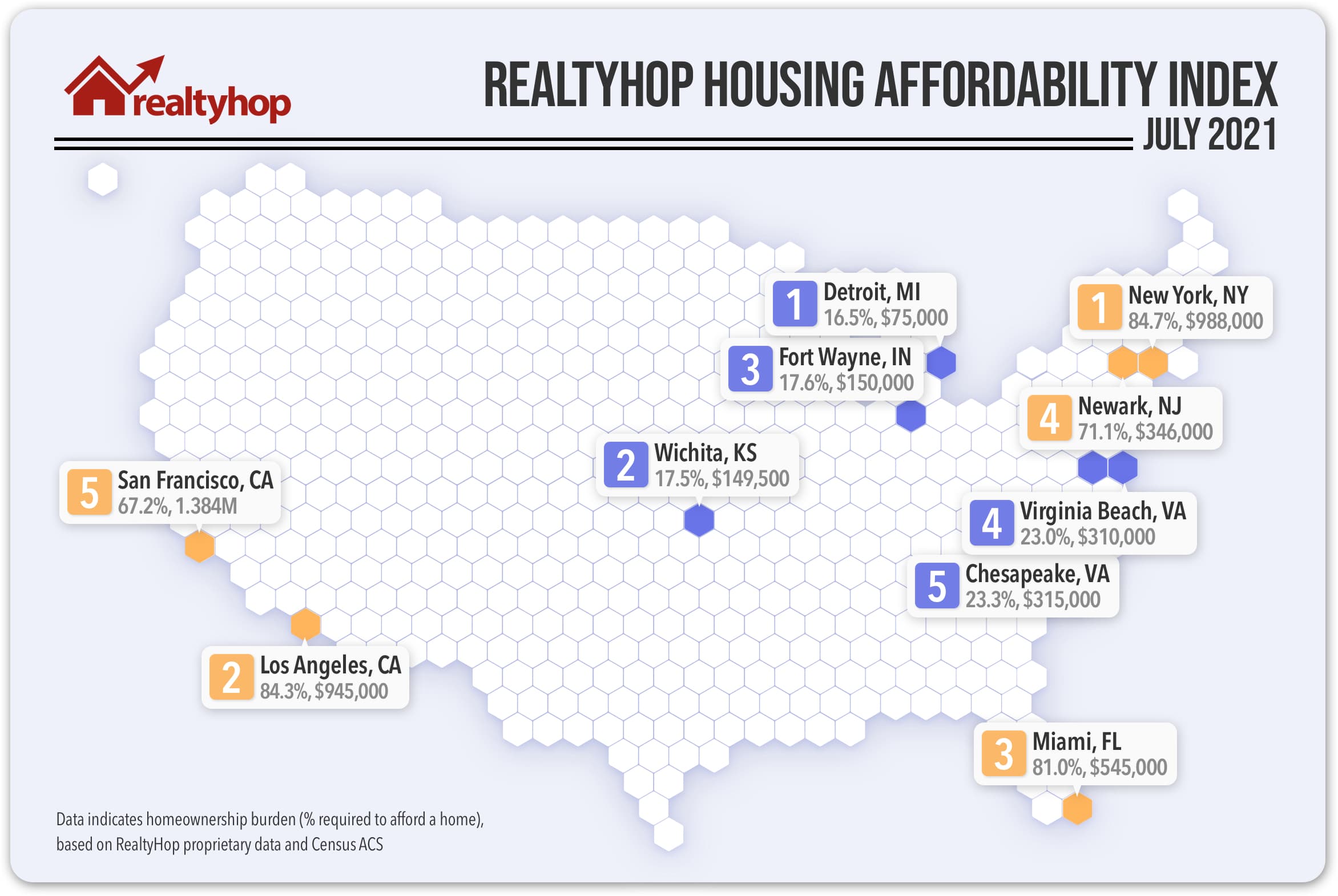 1. For the first time since RealtyHop started tracking housing affordability in the U.S. in February 2019, New York, NY is now the least affordable housing market. With median real estate asking $988,000, a family in New York City would need to set aside 84.7% of their annual $64,000 income to own — a 3.12% month-over-month increase over the previous month.

2. Los Angeles, CA is no longer the titleholder for the least affordable housing market. With a median asking price of $945,000, an average L.A. family making $62,000 a year would need to allocate 84.3% of their annual income toward monthly mortgage payments and property taxes. That’s only a 1.05% month-over-month decrease from our previous report.

3. Miami, FL was once again the third most cost-burdened city. Given the median asking price of $545,000 and household income of $39,000, a household in Miami would need to contribute 81% of annual income toward homeownership costs.

4. Newark, NJ was the fourth most expensive housing market in the nation, with median real estate prices hitting $346,000 this month. In order to own, an average household making $35,200 would need to spend 71.1% of their annual income towards homeownership costs.

5. San Francisco, CA continues to be one of the most expensive housing markets in the U.S. With an annual income of about $112,450, median homebuyers should expect to spend 67.2% of their annual income in order to own a $1.4 million home in the city.

1. Detroit, MI is once again the most affordable U.S. market but got a tad more expensive from where it was in June. Median asking prices increased 4.2% to $75,000.

2. Wichita, KS was the second most affordable city in the nation. With a median asking price of $140,000, a family in Wichita would only need to spend 16.41% of their annual income of $52,620 toward homeownership costs.

3. Fort Wayne, IN remained the third least cost-burdened housing market in the U.S. The city’s median list price hit $149,500, a 3.45% month-over-month increase. Given household incomes of $49,411, a Fort Wayne family should set aside 17.6% of their income to pay for housing costs.

4. Virginia Beach, VA is still the fourth most affordable U.S. city this July; boasting strong incomes and relatively affordable housing options. Given a household income of $76,610, and median real estate values of $310,000, an average family in Virginia Beach would only need to spend roughly 23% of their annual income on housing.

5. Chesapeake, VA bumped Louisville, KY from the top 5 this month. The median list price currently sits at $315,000. Families making $78,640 a year and looking to buy should expect to spend 23.3% of their annual income, toward monthly mortgage payments and taxes.

Pittsburgh, PA became less affordable in recent months thanks to the strong buying demand. Home prices spiked almost 9% in just a month to $259,000 this July. The Steel City is now the 54th least affordable city with an annual family income hovering $48,700.

Winston-Salem, NC also became more expensive. The city increased eight spots to take 68th place on our affordability ranking. Winston-Salem’s real estate market has become increasingly competitive as more people flow into the city for work. Per the New York Times, it now boasts “a busy downtown with significant residential growth.” With a median asking price of $225,000 and a household income of $45,750, a family should set aside 29% of their income toward mortgage and property taxes.

Cincinnati, OH got a little more expensive. The Queen City jumped five spots and now ranks 48th. The median asking price for this July hit $215,000. A family in Cincinnati making a median income of $40,640 should expect to spend $1,171 a month on homeownership costs.