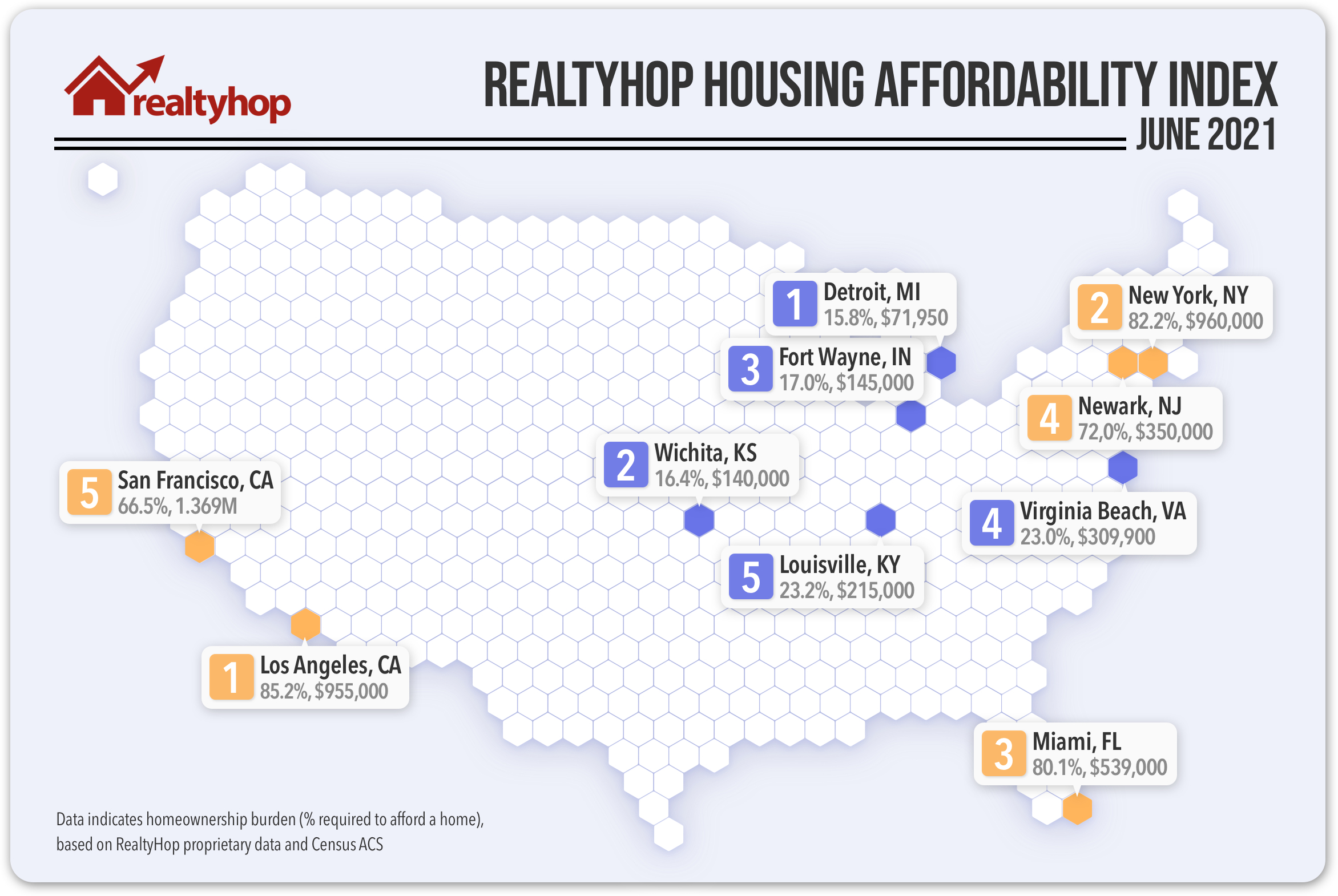 1. Los Angeles, CA once again topped all major U.S. cities as the least affordable housing market this month. With a median asking price of $955,000 and a household income of $62,142, an average L.A. family looking to own would need to allocate 85.15% of their annual income toward monthly mortgage payments and property taxes.

2. New York, NY remained the second least affordable housing market despite strong household income of $63,998. With median real estate asking $960,000, a family in New York City would need to set aside 82.16% of their annual income to own — a 0.85% increase over the previous month.

3. Miami, FL was the third most expensive housing market this June. Given the median asking price of $539,000 and household income of $39,049, a household in Miami would need to contribute 80.06% of annual income toward homeownership costs, or roughly $2,065 per month.

4. Newark, NJ was the fourth most cost-burdened city in the nation, with median real estate prices hitting $350,000 this month. In order to own, an average household would need to spend 71.95% of their annual income towards homeownership costs.

1. Detroit, MI continued to be the most affordable U.S. market despite a small hike in home prices this June. Median asking prices increased slightly to $71,950.

2. Wichita, KS was the second most affordable city in the nation. With a median asking price of $140,000, a family in Wichita would only need to spend 16.41% of their annual income toward homeownership costs, or about $719 a month.

3. Fort Wayne, IN remained the third least cost-burdened housing market in the U.S. The city’s median list price hit $145,000, a 1.5% increase from last month. Given household incomes of $49,411, real estate taxes, and a 30-year fixed mortgage at 4.5%, a Fort Wayne family should set aside 17% of their income to pay for housing costs.

4. Virginia Beach, VA was the fourth most affordable U.S. city this June; boasting strong incomes and relatively affordable housing options. Given household income of $76,610, and median real estate values of $309,900, an average family in Virginia Beach would only need to spend 23.03% of their annual income on housing.

5. Louisville, KY rounded out our five most affordable markets for the second straight month. The median list price currently sits at $215,000, 2.4% higher than the previous month. Families looking to buy in Louisville should expect to spend $1,033 a month, or 23.21% of their annual income, toward monthly mortgage payments and taxes.

Fresno, CA became less affordable in recent months thanks to the strong buying demand, with real estate values up over 18.4% year-over-year. It’s the 32nd least affordable city as the median list price reached $327,450 this June.

Garland, TX increased six spots to take 73rd place on our affordability ranking. While still affordable compared to nearby cities such as Dallas and Plano, Garland’s real estate market has become increasingly competitive as more people flow into the city. With a median asking price of $260,000, and a household income of $61,211, a family should set aside 28.24% of their income toward mortgage and property taxes.

Plano, TX jumped five spots this month — no surprise given that this Dallas suburb is often considered one of the most livable cities in Texas. Median asking prices this June were $425,000, trending up 16.4% year-over-year. A family in Plano making a median income of $95,602 should expect to allocate 29.4% of their annual income toward homeownership costs.