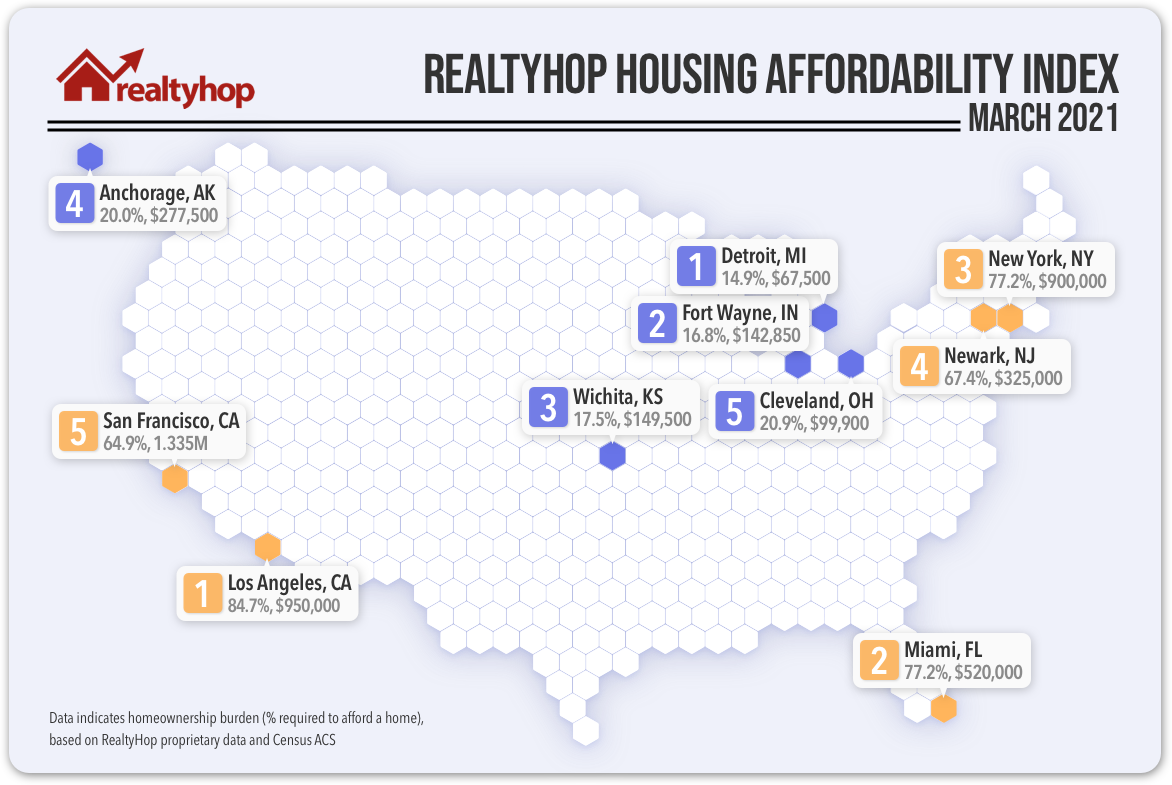 In this March installment of the RealtyHop Housing Affordability Index, we investigate the decision to purchase a home in the 100 most populous cities across America. Is homeownership affordable or even possible for the average family in each city? Every month we analyze proprietary RealtyHop data alongside comprehensive U.S. Census data to find out. See how your city fares in affordability.

1. Los Angeles, CA
Los Angeles, CA  was the least affordable city in America again this March. Despite strong household income of $62,142, real estate prices made owning a home a far reach for most residents. Given current mortgage and tax rates, a family in LA would need to spend 84.71% of annual income in order to afford a home.

2. Miami, FL
Miami, FL  remained the second least affordable city for homeowners. In fact, the average household in Miami would need to spend $2,513 per month, or 77% of annual income, on the costs associated with homeownership.

4. Newark, NJ
Newark, NJ was the fourth most burdened city for homeowners, as the city’s index increased another 1.56%. Given household income, mortgage, and tax rates, an average family in Newark would need to spend 67.38% of income on housing costs. This equated to $1,976 per month in dollar terms.

5. San Francisco, CA
San Francisco, CA was the fifth most unaffordable housing market. While income remains strong at $112,449 per household, high real estate prices put a squeeze on most families. An average family in SF would need to spend $6,077 per month, or 64.85% of income, in order to own a home.

1. Detroit, MI
Detroit, MI  was again the most affordable city for homebuyers, despite an increase in property prices over the period. A family looking to buy a home would need to only spend 14.85% of their income on housing costs, or roughly $382 per month.

2. Fort Wayne, IN
Fort Wayne, IN  came in as the second most affordable market this month. Given strong household income of $49,411 relative to home prices, a family would only need to spend 16.75% of annual income on homeownership costs each year.

3. Witchita, KS
Witchita, KS  was stable as the third most affordable city this March. A local household would only need to spend $768 per month on housing costs, given affordable real estate prices relative to incomes.

4. Anchorage, AK
Anchorage, AK  remained affordable with a median property price of $277,500, and household income of $84,928. Given the current market, a family in Anchorage would only need to spend 20% of their income in order to own a home locally.

5. Cleveland, OH
Cleveland, OH  was stable as the fifth most affordable city. Household income was $30,907 alongside home prices of $99,900. Given current rates, a family in Cleveland would only need to spend 20.89% of income towards the costs of owning a home.

Boise, ID
Boise experienced a hike in property prices from $379,900 to $399,000, leading to a 5.03% increase in its index. A household in Boise should expect to spend roughly 38% of income on housing costs if they plan to purchase a home.

Charlotte, NC
Charlotte dropped five spots on our list, as the city became more affordable in the period. Home prices decreased from $362,900 to $354,750, leading to a 2.25% drop in the city’s affordability index.