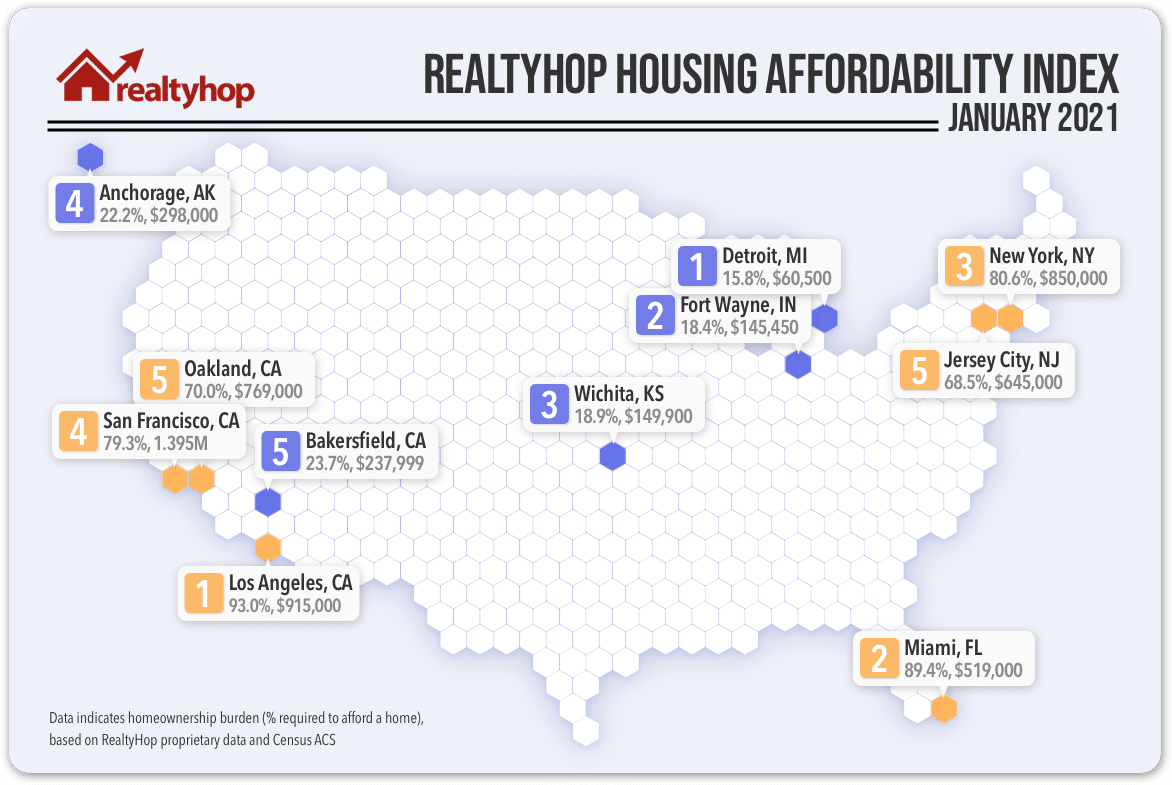 In this January installment of the RealtyHop Housing Affordability Index, we investigate the decision to purchase a home in the 100 most populous cities across America. Is homeownership affordable or even possible for the average family in each city? Every month we analyze proprietary RealtyHop data alongside comprehensive U.S. Census data to find out. See how your city fares in affordability.

1. Los Angeles, CA
Los Angeles, CA  continued its reign as the least affordable housing market in the country. Real estate this January dipped to a median of $915,000, leading to a 0.54% drop in the city’s affordability index. An average family in LA looking to purchase a home should expect to spend a staggering 93.03% of income toward mortgage and tax costs.

2. Miami, FL
Miami, FL  was the second least affordable housing market this January. A family in Miami would need to allocate $2,532 per month, or roughly 89% of annual income, in order to purchase a local home. This was an improvement over last month’s 90.4% statistic.

3. New York, NY
New York, NY  saw listing prices drop over the month from $869,000 to $850,000. However, the slide wasn’t enough to improve the city’s affordability situation, as it remained the third most cost burdened housing city in America. An average family in New York would need to spend $3,879 per month, or 80.57% of annual income, in order to own a home locally.

4. San Francisco, CA
San Francisco, CA  had the highest real estate prices in the country at $1.395M. Despite also having the fourth highest household incomes, residents continued to be highly cost burdened. An average family in SF would need to spend $6,359 per month, or 79.27% of annual income, in order to own a home in the city.

5. Oakland, CA
Oakland, CA  placed as the fifth least affordable market, despite a slight dip in its real estate. Median asking prices were $769,000 in the period, down from $772,000 last month.

1. Detroit, MI
Detroit, MI  continued to be the most affordable market for homebuyers this January. The city had a low median listing price of $60,500, alongside household income of $27,838. Given this, a family in Detroit looking to purchase would only need to spend 15.77% of income on mortgage and tax costs.

2. Fort Wayne, IN
Fort Wayne, IN  saw a slide in real estate prices to a median of $145,450, leading to a more affordable home buying environment. A household in the city would only need to allocate 18.4% of income toward mortgage and tax costs, or about $703 per month.

3. Witchita, KS
Witchita, KS  experienced a continued slide in property values this January, as listings dipped to a median of $149,900 from $155,000 in December. An average family would only need to spend 18.91% of income on the costs of owning a home in the city.

4. Anchorage, AK
Anchorage, AK  placed on our most affordable markets list for the second month in a row, as home prices further dropped to $298,000. Given strong household incomes of $82,271, a family in Anchorage would only need to allocate 22.16% of earnings per year toward the costs of owning a home.

5. Bakersfield, CA
Bakersfield, CA  dropped one spot to become the fifth most affordable housing market. Household income was $60,058, while median listing prices were $237,999. Given these, a family in Bakersfield would only need to spend $1,184 per month on homeownership costs, or 23.66% of annual income.

Sacramento, CA
Sacramento increased five spots to 27th place, as home values increased to $415,000 from $397,000. An average family looking to purchase property in the city should expect to spend roughly 43% of income on the costs associated with homeownership.

Greensboro, NC
Greensboro increased six spots to 46th place, as the city’s affordability index jumped 4%. Given household income of $44,978, home prices of $259,900, as well as local taxes, a family in Greensboro would need to spend a reasonable 34.93% of income in order to own a home.

Birmingham, AL
Birmingham, AL became more affordable, as the city fell twelve spots to 54th place. The change was due to home prices decreasing from $230,000 to $209,950 over the past month.