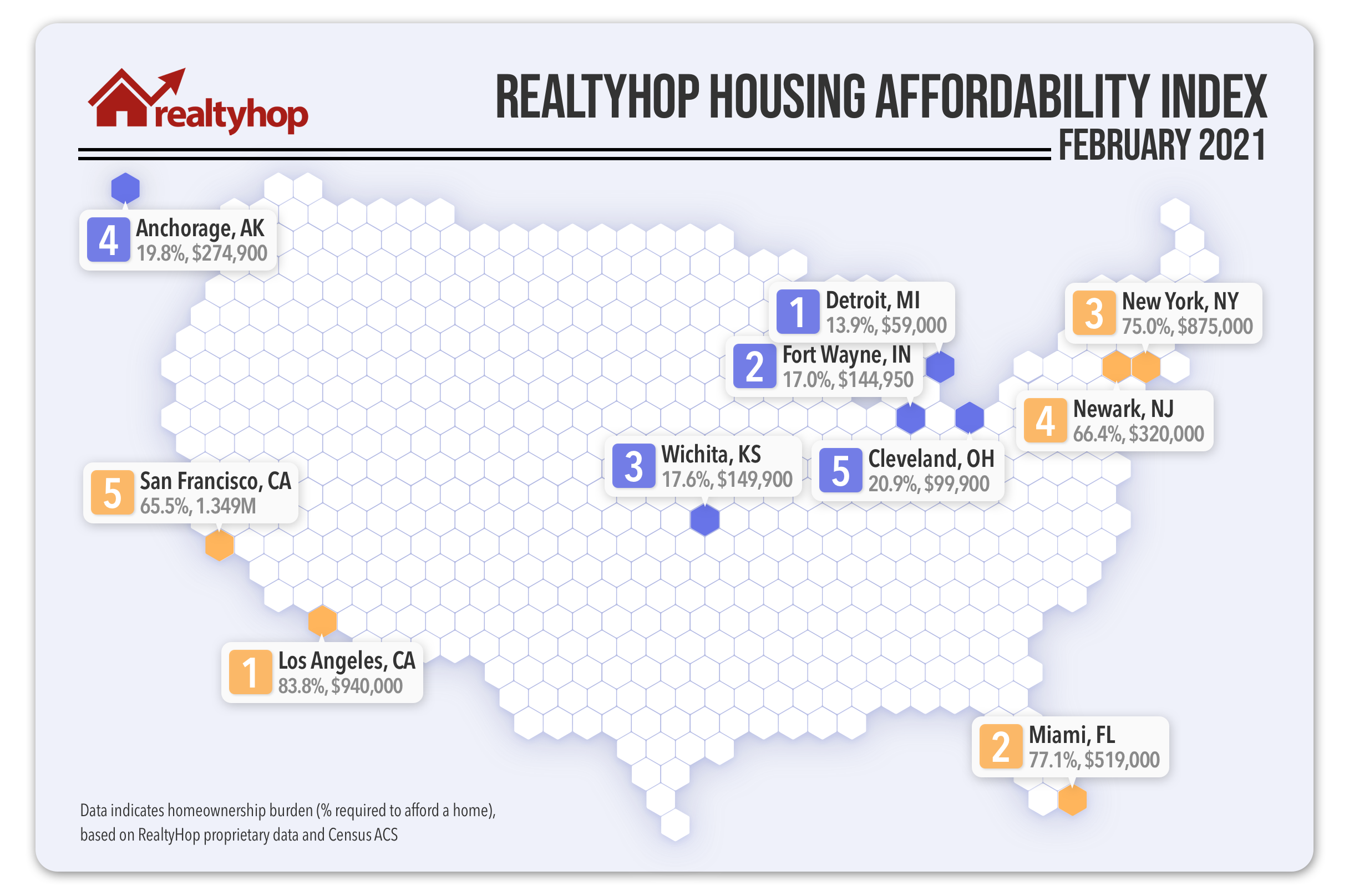 In this February installment of the RealtyHop Housing Affordability Index, we investigate the decision to purchase a home in the 100 most populous cities across America. Is homeownership affordable or even possible for the average family in each city? Every month we analyze proprietary RealtyHop data alongside comprehensive U.S. Census data to find out. See how your city fares in affordability.

A note about this report: This month’s dataset was updated to include the latest U.S. Census figures for median household income. To ensure we compared values uniformly across time, our calculations used these new incomes for both this month’s and last month’s datasets. You may see discrepancies between prior reports based on this change.

1. Los Angeles, CA
Los Angeles, CA  was again the least affordable housing market in the country, despite a strong median household income of $62,142. Given local taxes, mortgage rates, and current home prices of $940,000, a house hunting family should expect to allocate 83.82% of their income toward homeownership costs.

2. Miami, FL
Miami, FL  was another unaffordable housing market this February. An average family in Miami would need to spend $2,509 per month, or roughly 77% of annual income, in order to purchase a home. The median sales price was $519,000 over the past month.

4. Newark, NJ
Newark, NJ  jumped three spots on our ranking to become the fourth most cost burdened market for homeowners. Median real estate prices rose from $309,900 to $320,000, leading to a 3.67% increase in the city’s affordability index. Given household incomes, as well as mortgage and tax costs, an average family in Newark should expect to pay $1,946 per month in order to own their home.

5. San Francisco, CA
San Francisco, CA  fell one spot on our ranking, led by a softening in housing prices over the month. Despite high incomes of $112,449 per household, expensive real estate prices continued to temper home buying activity. A family in SF should expect to pay $6,139 per month in order to own a home, equating to roughly 66% of total annual income.

1. Detroit, MI
Detroit, MI  remained the most affordable market for homebuyers this February, as prices further dropped to a median of $59,000. A family in Detroit looking to purchase a house would only need to spend an average of $357 per month on mortgage and tax costs, or 13.86% of their annual income.

2. Fort Wayne, IN
Fort Wayne, IN  was stable over the past month, with home values hovering at a median of $144,950. A household in the city should expect to spend only 16.99% of income toward homeownership costs, or roughly $700 per month.

3. Witchita, KS
Witchita, KS  was another affordable city for home buyers this month. Median household income was strong at $52,620, alongside affordable housing prices at $149,900. A family looking to purchase a home in Wichita would only need to spend 17.57% of annual income on housing costs, or about $770 per month.

4. Anchorage, AK
Anchorage, AK  remained the fourth most affordable market in the country, as the city’s median home price dropped from $298,000 to $274,900. Given strong household income of $84,928, as well as local taxes and mortgage rates, a family in Anchorage would only need to spend 19.77% of earnings each year on the costs of owning a home.

5. Cleveland, OH
Cleveland, OH  was another affordable option for homebuyers, with favorable real estate prices relative to household incomes. A family in Cleveland needs to spend 21% of annual income in order to own their home, or about $538 per month.

Orlando, FL
Orlando became more affordable this month, as it dropped nine spots on our ranking to 48th place. The change was led by a fall in home prices from $285,000 to $269,900.

Oakland, CA
Oakland fell out of the top five least affordable markets, due to a slide in housing prices to $725,000. The city still remains expensive, with an affordability index of 56.23%.

Baton Rouge, LA
Baton Rouge jumped nine spots this month, as the city became more expensive for homebuyers. Home values increased from $200,000 to $210,000, leading to a 6.32% hike in the city’s affordability index.