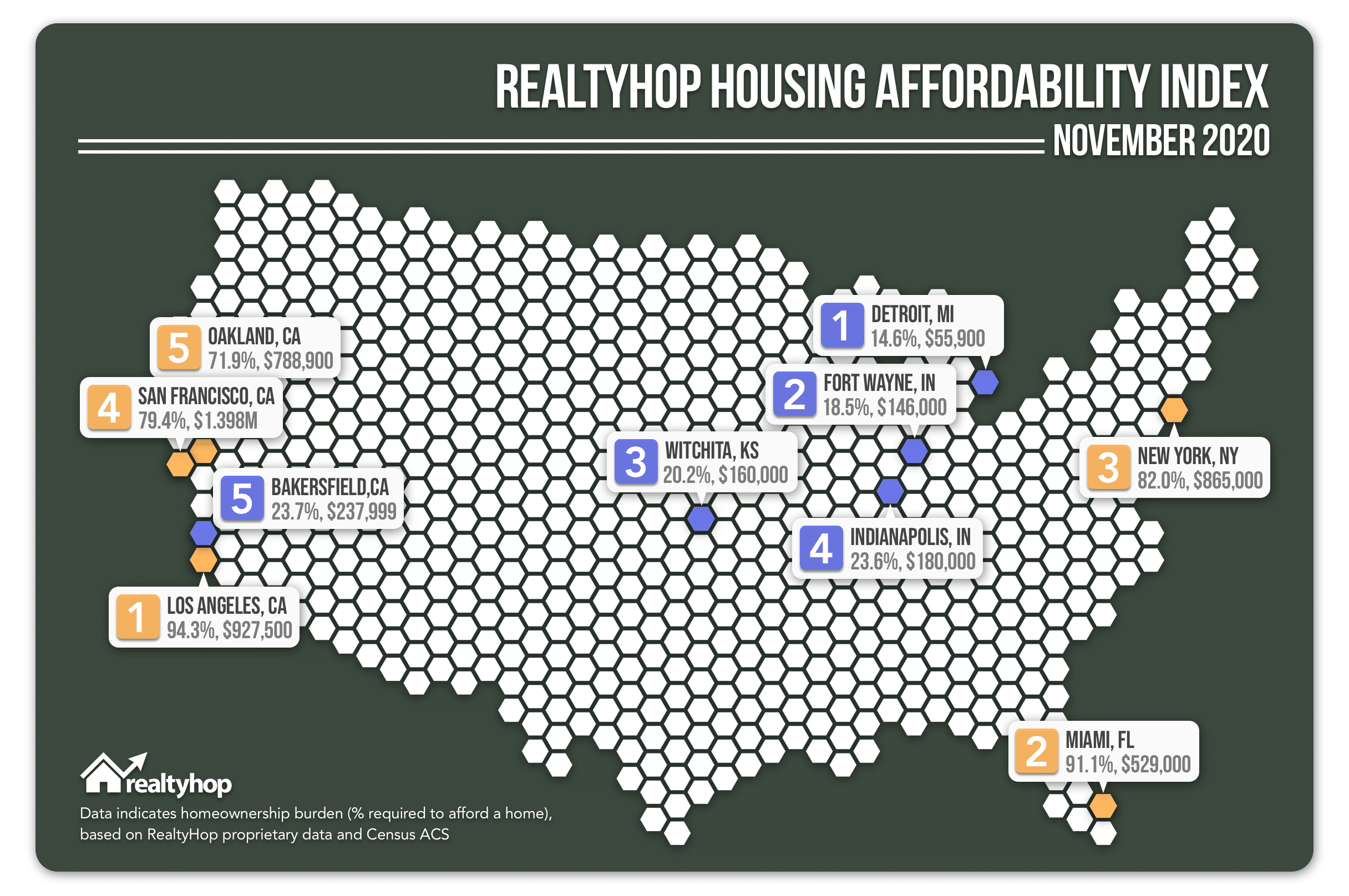 In this November installment of the RealtyHop Housing Affordability Index, we investigate the decision to purchase a home in the 100 most populous cities across America. Is homeownership affordable or even possible for the average family in each city? Every month we analyze proprietary RealtyHop data alongside comprehensive U.S. Census data to find out. See how your city fares in affordability.

Los Angeles, CA  was again the least affordable market in the country this November, despite real estate prices dropping to a median of $927,500. Given local taxes and median household income of $54,501, the average family in LA looking to purchase a home would need to spend a large 94.3% of annual income on mortgage and tax costs.

Miami, FL  placed as the second least affordable market, driven by high real estate prices relative to household income. While the city’s $529,000 median was in line with other prominent east coast metros, household income of $33,999 meant that an average family would need to spend 91.09% of this pay in order to own a home.

New York, NY  saw real estate fall back to a median of $865,000 from $880,000 last month, leading to a favorable 1.7% drop in the city’s index. An average household in New York looking to purchase a home should expect to allocate 82% of income towards ownership costs, or about $3,948 per month.

San Francisco, CA  was another unaffordable market, as home prices remained stable at a median of $1.398M. Given local taxes and mortgage rates, a family in SF would need to allocate a considerable 79.44% of annual income toward homeownership costs, equating to a monthly payment of $6,372.67.

Oakland, CA  became less affordable in the month, as the city’s index rose 5.19% from a jump in home prices. The median listing price in the city was $788,900, a considerable hike from $750,000 at the start of October. Given household income, as well as local taxes and mortgage rates, a family in Oakland should currently expect to pay 71.86% of income toward the costs of owning a home.

Detroit, MI  was the most affordable market in the country this November. So affordable, in fact, that the average Detroit family would only need to spend 14.57% of annual income in order to own a home. This equates to a monthly payment of just $338.11.

Fort Wayne, IN  remained the second most affordable city in the country for homebuyers, led by an even further drop in listing prices. A family in Fort Wayne looking to purchase a home should currently expect to allocate a reasonable 18.47% of annual income towards homeownership costs.

Witchita, KS  was stable as the third most affordable market, as median home prices remained at $160,000. Given household income of $48,982, as well as local taxes and mortgage rates, a family in Wichita would only need to pay $823.74 per month in order to own a home, or 20.18% of annual household income.

4. Indianapolis, IN
Indianapolis, IN  became the fourth most affordable market for homebuyers, increasing one spot on our affordability ranking. An Indianapolis household would only need to allocate 23.59% of income toward the costs of owning a home.

Bakersfield, CA  rounded out our five most affordable markets, remaining stable throughout the month. Given household income of $60,058, median real estate of $237,999, as well as local mortgage and tax rates, a family in Bakersfield would need to spend a reasonable 23.66% of annual income on homeownership costs.

Tulsa dropped eleven spots to 60th place, as the city experienced a sizable decrease in home prices to $236,500. A family in Tulsa looking to purchase a home should expect, on average, to spend 31.92% of income toward mortgage and tax costs.

Cleveland, OH Cleveland increased four spots to 93rd place, as the city’s homeownership index jumped 5% in the month. The change was led by a hike in real estate prices to a median of $105,000, compared with $100,000 last month. The city remains an affordable option, however, with a low affordability index of 24.56%.