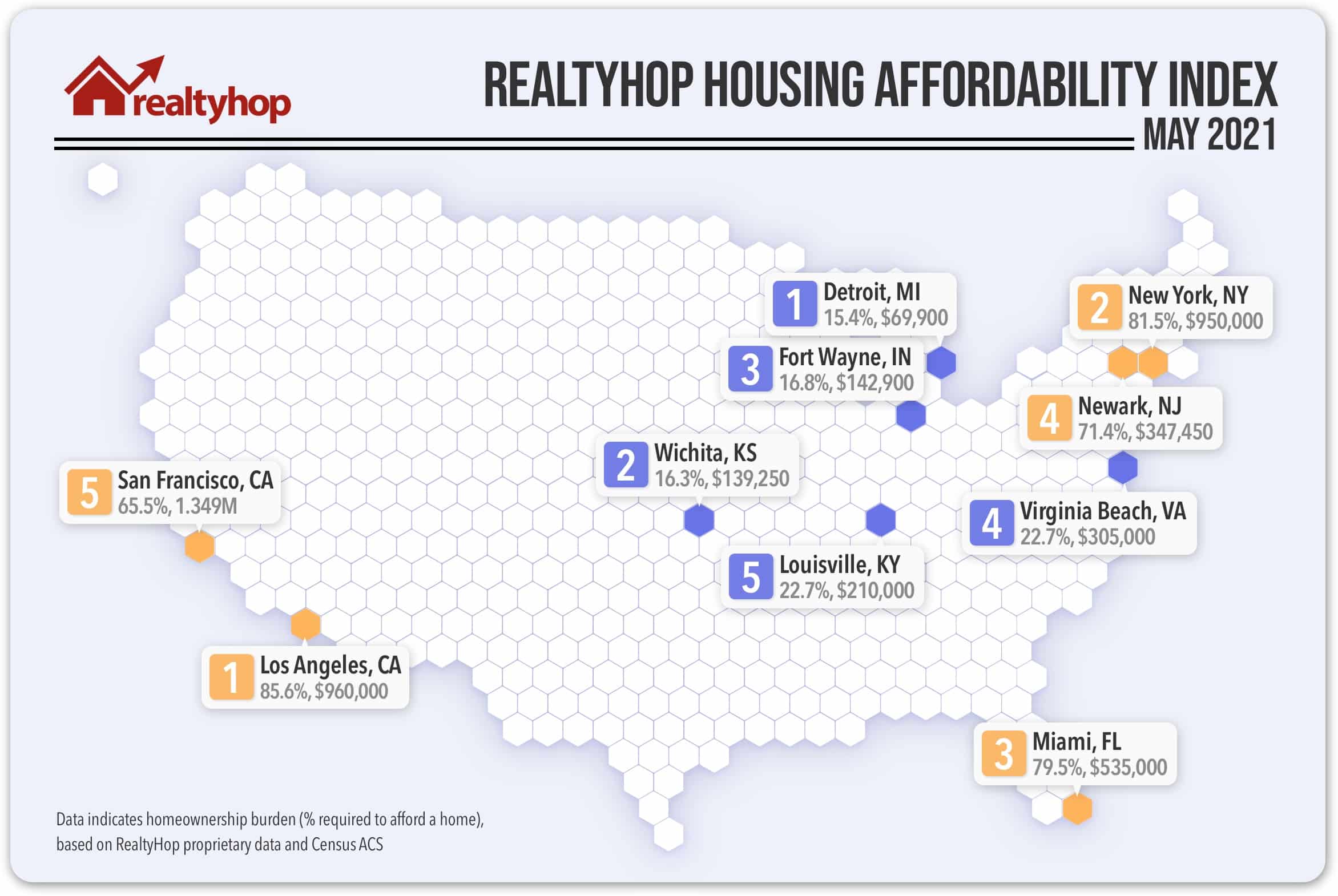 In this May installment of the RealtyHop Housing Affordability Index, we investigate the decision to purchase a home in the 100 most populous cities across America. Is homeownership affordable or even possible for the average family in each city? Every month we analyze proprietary RealtyHop data alongside comprehensive U.S. Census data to find out. See how your city fares in affordability.

1. Los Angeles, CA once again topped all U.S. cities as the least affordable housing market this May. Despite a median household income of $62,142, a family in L.A. would have to spend 85.60% of their annual income to own, or $4,433 per month in dollar terms.

2. New York, NY outpaced Miami this month as the second most cost-burden U.S. city, thanks to increased demand driven by first-time homebuyers looking for a deal in the post-pandemic world. With a median asking price of $950,000, an average household looking to own would have to set aside 81.46% of annual income, or $4345 per month.

3. Miami, FL fell one spot to become the third least affordable housing market among major U.S. cities, despite a 1.90% month-over-month change in homeownership burden. The current monthly cost to own a home in Miami is $2,586, which translates to 79.47% of a family’s annual income.

4. Newark, NJ remained the fourth most expensive city for owning in the nation. The median asking price in Newark hit $347,450 this month, further pushing the city’s index up by 0.59% month-over-month. With a median household income of $35,199 a year, a family can expect to allocate 71.43% of their income towards the costs of homeownership.

5. San Francisco, CA rounded out our five least affordable markets. Despite the city’s strong income of $112,449, a family looking to own would have to spend 65.52% of their annual income toward mortgage payments and taxes, or $6,139 per month in dollar terms.

1. Detroit, MI remained the most affordable U.S. market among the top 100 most populous cities. A family in the city would only need to set aside 15.38% of their annual income to own, after factoring in property taxes, monthly principal and interest, and the median asking price of $69,900.

2. Wichita, KS came in as the second most affordable city in the nation, increasing one spot on our affordability ranking. For a median asking price of $139,250, homebuyers in Wichita would need to put on average 16.32% of their annual income toward property taxes and mortgage payments.

3. Fort Wayne, IN was the third most affordable housing market, dropping one spot on our affordability ranking. Median asking prices dropped slightly to $142,900, leading to an average monthly payment of $690, or 16.75% of a household’s annual income.

4. Virginia Beach, VA came in as the fourth most affordable U.S. city this May, improving on our affordability ranking by three spots. With a median list price of $305,000, homebuyers in Virginia Beach should expect to spend on average 22.67% of their annual income on housing costs.

5. Louisville, KY concluded our affordability index this month as the fifth most affordable housing market. The city’s real estate values were up over 5% year-over-year, with median asking prices reaching $210,000. A family would need to contribute just over $1000 per month toward mortgage and property taxes, to own a home. This translates to 22.67% of their annual income.

Notable Changes This May

Sacramento, CA has become increasingly less affordable, with real estate values up over 18% year-over-year. The median asking price currently sits at $415,000, and for a family looking to own, they’d have to spend 37.94% of their annual income on mortgage payments and property taxes. That’s $1,971 in dollar terms.

Austin, TX jumped four spots this month to become the 19th least affordable city in the nation. Strong demand has been consistently pushing up the real estate values in Austin. On average, a family would have to allocate 42.81% of their annual income, or $2,553 per month, to owning a home.

Philadelphia, PA became less affordable this May compared to other U.S. cities, up 5 spots from the previous month. With a median home price of $260,000, buyers can expect to spend 32.99% of their annual income on homeownership.