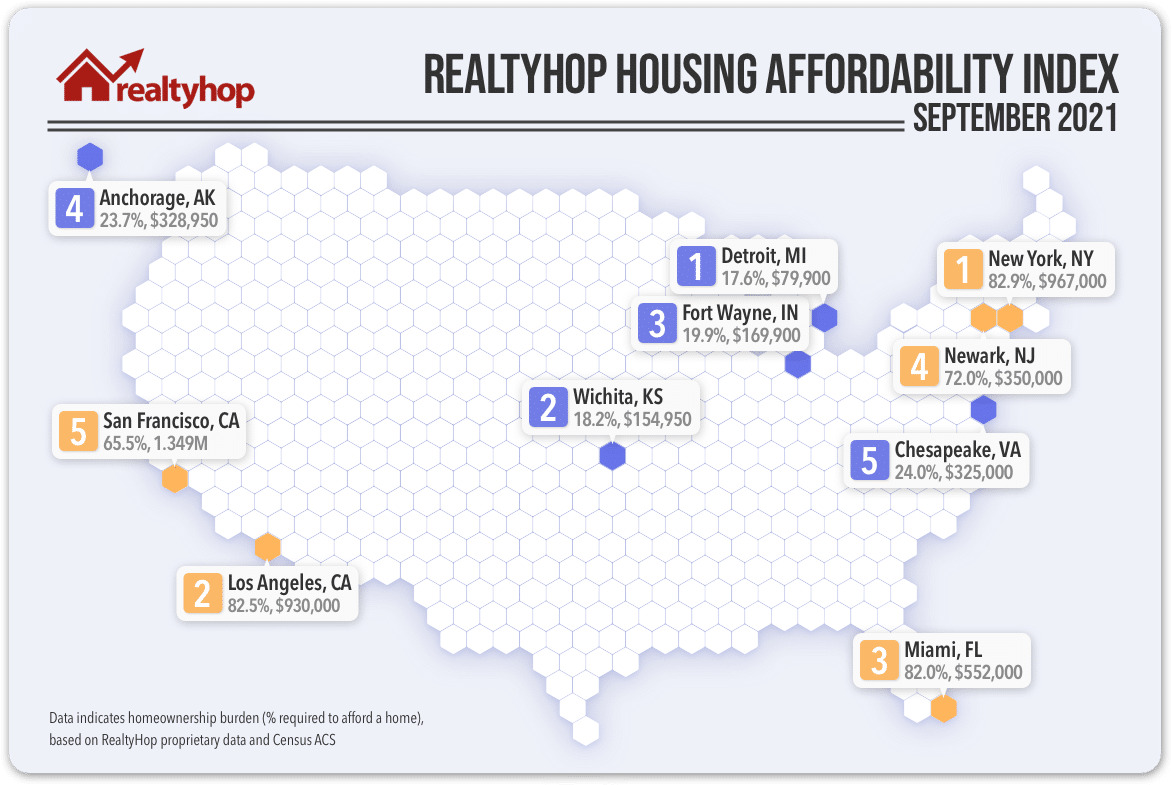 Each month, we ask a question:

Is homeownership affordable or even possible for the average family in America?

We answer this question through the monthly RealtyHop Housing Affordability Index. For the September 2021 installment, we studied proprietary RealtyHop analytics and comprehensive U.S. Census data to determine the current circumstances of buying a home in the 100 most populous cities across the U.S. This month, 60% of the cities became less affordable. Compare and contrast your city’s affordability to others.

1. While the growth fueled by the pandemic recovery has plateaued, New York, NY continues to be the least affordable housing market across the nation in August. With median real estate asking $967,000, a family in New York City would have to contribute 82.92% of their annual income toward mortgage payments and property taxes.

2. Los Angeles, CA is still the second least affordable U.S. city. With a median asking price of $930,000, an average L.A. family making $62,000 a year would need to set aside 82.52% of their annual income toward homeownership, a 1.55% month-over-month decrease from the previous month.

3. Miami, FL maintains its position as the third most expensive housing market. Given the median asking price of $552,000, a family in Miami should expect to spend $2,668 per month on property taxes and mortgage payments to maintain their homeowner status. This equals 82% of their household income when annualized.

4. Newark, NJ is again the fourth most cost-burdened city in the nation, with median real estate prices reaching $350,000 in August. In order to own a middle-tier home, a family in Newark needs to put 67.6% of their annual income toward homeownership costs.

5. San Francisco, CA continues to be one of the least affordable housing markets with one of the highest median asking prices in the U.S. With a whopping annual income of about $112,449, median homebuyers would still need to spend over 65% of their annual income on mortgage payments and taxes in order to own a $1.4 million home in the city.

1. Detroit, MI remains the most affordable market among the top 100 U.S cities, even though home values did go up to $79,900 in August. Given household incomes of $30,894, an average family in Detroit would need to spend 17.6% of their income toward homeownership costs.

2. While residential real estate values did increase by over 3% in August, Wichita, KS continues to be one of the least cost-burdened housing markets in the nation. With the median asking price reaching $155,000, a family in Wichita would only need to set aside 18.2% of their annual income to cover principal and interest repayments and property taxes.

3. Fort Wayne, IN is still the third least cost-burdened housing market in the U.S. The city’s median list price hit $169,900 last month, and for an average family in Fort Wayne, this translates to $820 per month or 19.9% of their annual income.

4. Anchorage, AK replaced Virginia Beach, VA as the fourth most affordable U.S. city. The real estate values currently hover around $329,000, and for families making the median income in Anchorage, this means that they have to spend 23.7% of their annual income on homeownership.

5. Chesapeake, VA rounded up our five most affordable cities this month. The median list price in Chesapeake remains stable at $325,000, and based on the net effective tax rate and 30-year fixed mortgage, a family can expect to spend $1,575 on homeownership, which equals 24% of their annual income.

Gilbert, AZ became less affordable after prices spiked this past month. Home prices saw a 4.02% month-over-month increase to $520,000. The city went from being the 23rd most affordable city to the 30th. A family in Gilbert would have to set aside 29.5% of their annual income in order to own.

Louisville, KY became less affordable this month. The city moved up five spots to take 91st place on our affordability ranking. With a median asking price of $$230,000 and a household income over $53,000, a family should expect to spend 24.8% of their income toward mortgage and property taxes.

Real estate prices in Stockton, CA have skyrocketed in recent months, making it the 25th least affordable market in the nation. The city has seen unprecedented housing demand, which pushed the median list price to $395,000. A family making a median income of $54,614 in Stockton would need to put 41.8% of their income toward homeownership costs.