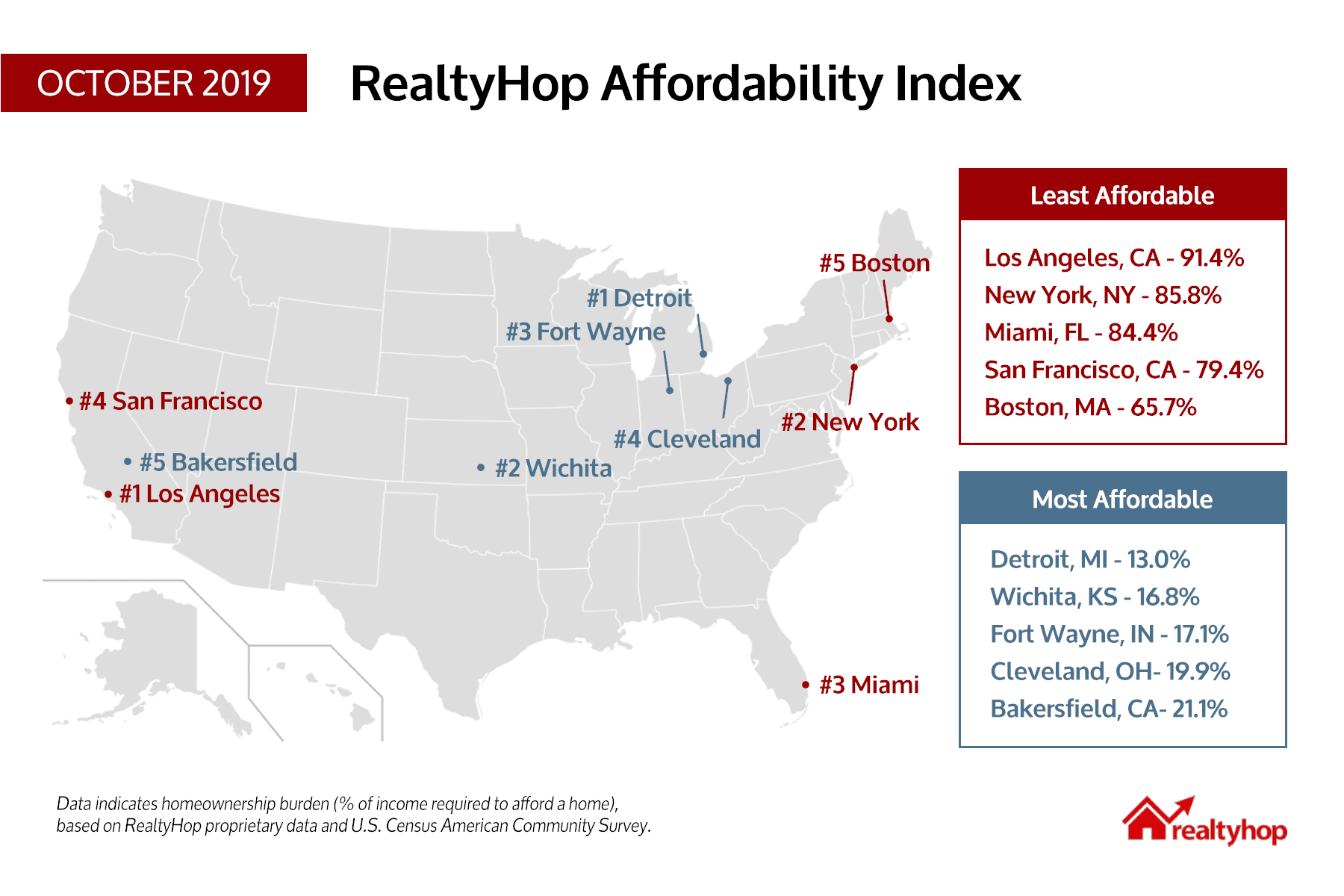 1. Los Angeles, CA was the least affordable city for homeowners this October, remaining the only place with a homeownership burden above 90%. Given standard mortgage and local tax rates, the average family in L.A. would need to allocate 91.4% of their total annual income in order to own a home.

2. New York, NY displaced Miami as second place on our list, as the city experienced a jump in home sales prices. The average household in New York should expect to pay 85.8% of total annual income toward homeownership costs, equating to about $4,130 per month.

3. Miami, FL saw a 1.81% decrease in homeownership burden this October. Miami still remains expensive for homeowners, with the average family needing to spend 84.4% of annual income to own a standard home in the area.

4. San Francisco, CA home prices continued their meteoric rise, leading to a 1.67% increase in our index. Given a staggering median sales price of $1.398 million, a household would need to spend just under 80% of their high annual income to afford a home in the city, given mortgage and tax rates.

5. Boston, MA remained in our top five for the second month in a row, as prices remained constant over the period. A household would need to shell out about $3,400 a month, or 65.7% of annual income, in order to own a home in the city.

1. Detroit, MI continues its reign as the most affordable city in which to own a home in America. With median home prices at $49,900, coupled with household income of $27,838, families on average only need to spend 13% of total annual income to own. This percentage remains significantly below the remainder of the country.

2. Wichita, KS jumped one spot to become the second most affordable market, driven by a 4.35% drop in homeownership burden. Mortgage and tax costs equate to $684 per month, or about 16.8% of annual household income, to own a home.

3. Fort Wayne, IN saw its affordability index remain relatively steady this month. The average Fort Wayne family would only need to spend $652 per month to cover the costs of homeownership in the city.

4. Cleveland, OH remained constant this October to hold the fourth most affordable spot. Given median home prices of $84,900 and household income of $27,854, Cleveland families only need to allocate 19.9% of annual income toward mortgage and tax costs.

5. Bakersfield, CA remained in the fifth most affordable spot for the second month in a row, further bolstered by a drop in home sales prices to $212,520. The average household in the city would only need to allocate 21.1% of annual income to pay for their home.