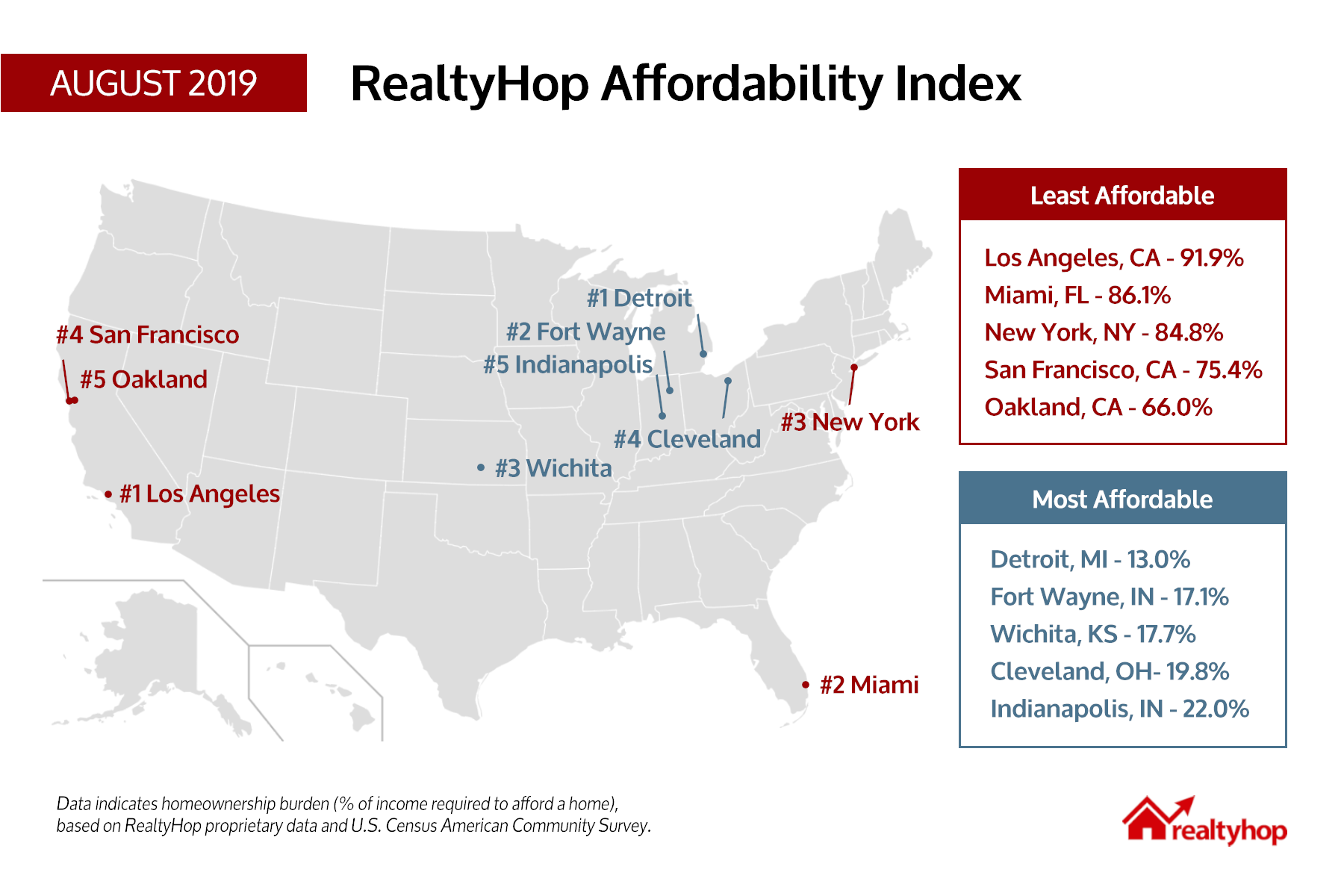 In this August installment of the RealtyHop Housing Affordability Index, we investigate the decision to purchase a home in the 100 most populous cities across America. Is homeownership affordable or even possible for the average family in each city? Every month we analyze proprietary RealtyHop data alongside comprehensive U.S. Census data to find out. See how your city fares in affordability.

1. Los Angeles, CA was again the least affordable housing market in the country, experiencing a 0.53% increase in homeownership burden. In order to own an average home in LA, a local family would have to spend $4,173 per month to cover standard mortgage and tax costs.

2. Miami, FL remained second place on our list, despite becoming more affordable over the month. Median home prices dipped under $500,000, leading to a 1.96% decrease in our burden index.

3. New York, NY was third place this August, with households requiring 84.83% of total annual income to be able to afford a standard home. This represented a 0.54% drop in our index when compared with July’s figure.

4. San Francisco, CA continued its upward trajectory, as home prices continued to increase over the month. Median asking prices in the city reached $1,327,000. Given this, mortgage and taxes for an average family would equate to $6,050 per month, or 75.4% of median household income.

5. Oakland, CA was again fifth place on our list, coming just behind its Bay Area counterpart. Oakland’s homeownership burden was 66%, meaning that the average family would need to spend about two thirds of total annual income to be able to own a home. This constituted an improvement of 3.07% compared with last month in terms of affordability.

1. Detroit, MI remained the most affordable housing market in the country, as home prices in August remained unchanged. The average family in Detroit would only need to allocate 13% of annual household income toward homeownership costs.

2. Fort Wayne, IN remained the second most affordable housing market in the nation this August. The average family would only need to allocate $652 per month to cover a mortgage and local taxes, or only 17.08% of total annual income.

3. Wichita, KS saw its homeownership burden drop 3.52% in the month, driven by a decrease in home prices to a median of $139,900. A household in the city should expect to allocate 17.65% of total annual income toward homeownership costs.

4. Cleveland, OH was the fourth most affordable city on our list this August. That being said, median home prices continued to rise; up to $84,500, an increase from $81,000 in July. The city still does offer a very affordable option for would-be homebuyers.

5. Indianapolis, IN saw a modest 1.82% increase in homeownership burden over the month, as home prices increased to $168,000. Mortgage and tax costs for the average local family comes out to an affordable $820 per month.