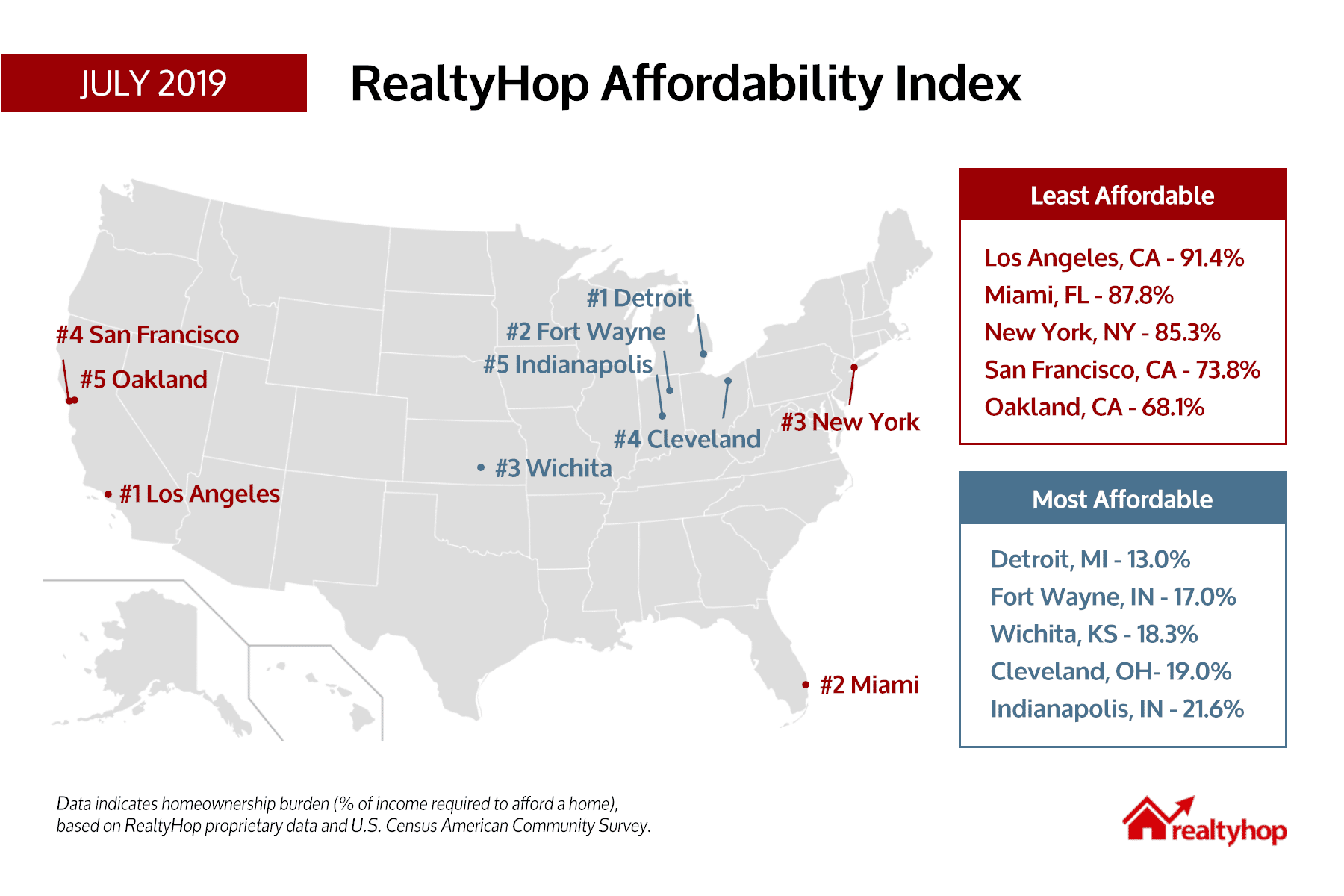 1. Los Angeles, CA saw a 1.44% increase in homeownership burden, as home prices increased to a median price of $899,000. Given this, the average household in LA would need to allocate a staggering 91.4% of total yearly income toward costs of owning a home.

2. Miami, FL was again the second most expensive homeownership market in the country. A 2.2% increase in housing burden meant that the average Miami household would require 87.2% of total annual income to cover mortgage and tax costs.

3. New York, NY was the third most expensive city in the country to own a home this July, with housing prices remaining steady at a median price of $899,900. New York’s homeownership burden was extremely high at 85.3% of total household income.

4. San Francisco, CA saw home prices stay relatively unchanged, leading to a flat homeownership burden of 73.8% compared with last month. As the fourth most expensive city on our list, and the most expensive in the Bay Area, residents should expect to allocate a significant portion of income toward owning a home. In fact, estimated mortgage and taxes for the average property come in at a steep $5,921 per month.

5. Oakland, CA was the fifth most expensive homeownership market, and second most expensive in the Bay Area. The city narrowed its gap between neighboring San Francisco, however, with a 4% increase in homeownership burden over the month. The average household in Oakland would need to allocate 68.1% of total annual income to own a home in the area.

1. Detroit, MI remained the most affordable housing market in the U.S., as median home prices and remained steady in July. A household in the city would only need to spend $302 per month, or 13% of annual income, to own a home.

2. Fort Wayne, IN saw a sharp 6.5% increase in homeownership burden as housing prices increased to a median of $134,900. Despite this, Fort Wayne remains very affordable, requiring only 17% of annual income to own a home.

3. Wichita, KS retained its spot as the third most affordable housing market this July. Median home asking prices did however increase to $145,000. A household in the city should expect to allocate 18.3% of total annual income toward homeownership costs, an increase of 5.5% compared with June.

4. Cleveland, OH remained the fourth most affordable city on our list, despite a 1.9% increase in homeownership burden over the month. Home prices continued to be affordable at a median sales price of $81,000.

5. Indianapolis, IN rounds out our list of the most affordable housing markets this July. The city saw a modest 2.5% increase in homeownership burden, with the average household requiring 21.6% of annual income to be spent toward mortgage and tax costs.