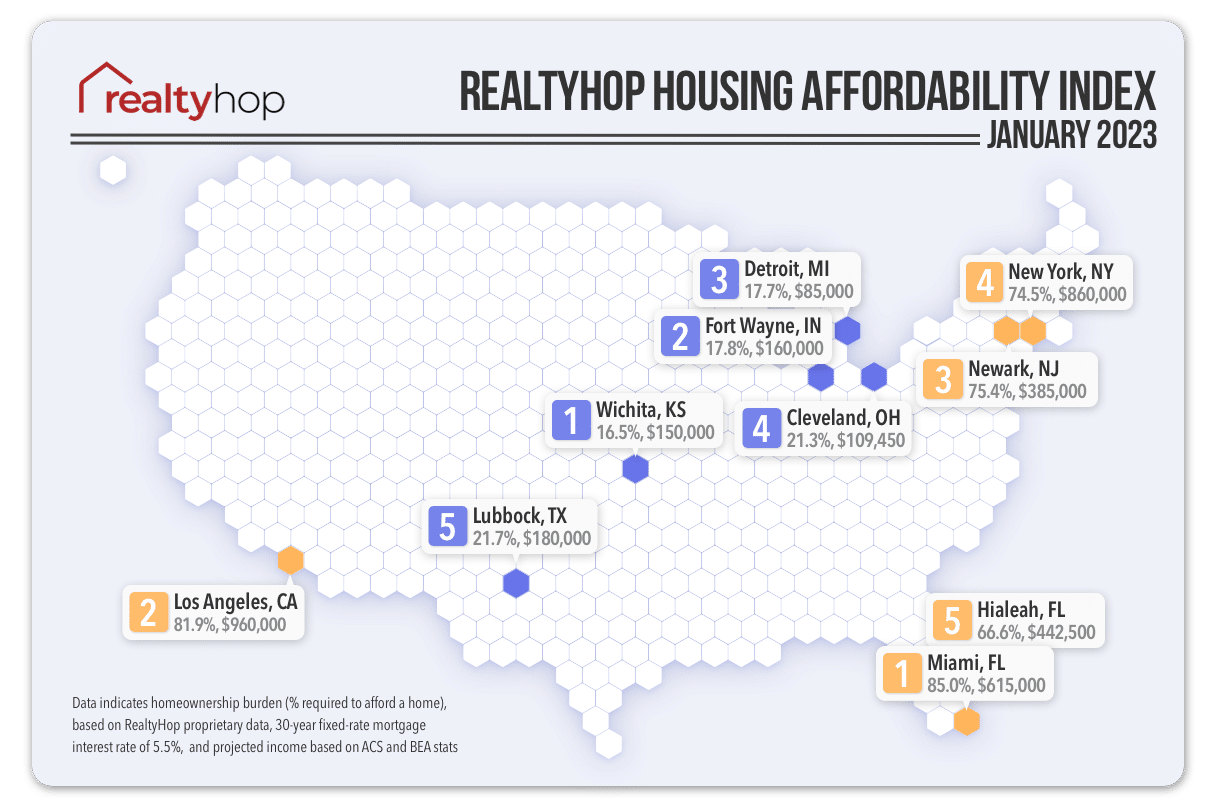 In this January edition of the RealtyHop Housing Affordability Index, we examine what American households across the 100 largest cities need to spend on housing to find out:

Given a standard mortgage, median home prices, and average household incomes, homeowners in 68 cities across the country need to spend over 30% of their income to own a home this January. However, good news is potentially on the horizon; existing homes are staying on the market for longer periods of time, indicating a better outlook for buyers in 2023.

Miami is the least affordable housing market in the country again this January, becoming slightly more affordable. A family earning the median city income will still need to spend 85% of their paycheck on housing costs, compared to 85.67% last month.

For the seventh month in a row, Los Angeles is the second least affordable housing market. A household earning an average income of $71,466 would need to allocate a staggering 81.94% of their annual paycheck towards owning a home.

Newark was the third least affordable city this month, increasing one spot and swapping rankings with New York City. The median home price in Newark jumped by $5,000 to $385,000 in the period.

Hialeah remains fifth on our least affordable ranking this month. A household making the average income of $41,500 would need to spend 66.61% of its pay in order to buy a home in the city.

For the fifth month in a row, Wichita ranks as the most affordable city in the country, despite home prices increasing to $150,000. A household earning the average income of $61,245 would only need to spend 16.54% of its income annually to own a home.

Fort Wayne is the second most affordable city this month, with home prices dropping from $165,000 to $160,000. The average family in Fort Wayne only needs to spend 17.49% of its paycheck towards the costs of owning a home.

Detroit is the third most affordable U.S. housing market, with property becoming even more affordable this month. A family earning the median salary of $35,528 only needs to spend 17.67% of their income in order to own a home in the city.

Cleveland held on to fourth place this January, as median home prices decreased from $115,000 to $109,450. Households earning the median income of $36,229 only need to spend 21.30% of their paycheck annually in order to own a property.

For the second month, Lubbock ranks as the fifth most affordable U.S. housing market. The median asking price for a home decreased from $185,000 to $180,000. Households that make a median income of $60,045 only need to spend 21.74% of their earnings on housing costs.

Louisville became less affordable this month, as home prices jumped from $235,000 to $250,000. While housing prices are still relatively cheap compared to the rest of the country, an average household in the city must now allocate 25.10% of its pay toward homeownership costs.

Winston-Salem jumped seven spots in our rankings to the 63rd least affordable housing market. The median purchase price for a home dropped from $259,990 to $257,190 in the month.

Phoenix decreased seven spots this month to 33rd place. Median home prices dropped from $449,000 to $435,000. In Phoenix, a family with an average income of $67,584 must allocate 39.22% of their income towards mortgage and property tax payments.

The real estate market has its ups and downs. In this January installment of the NYC price drops report,...
Market Trends & Research

In the December edition of RealtyHop’s Housing Affordability Index, we examined the share of income U.S. households would have...