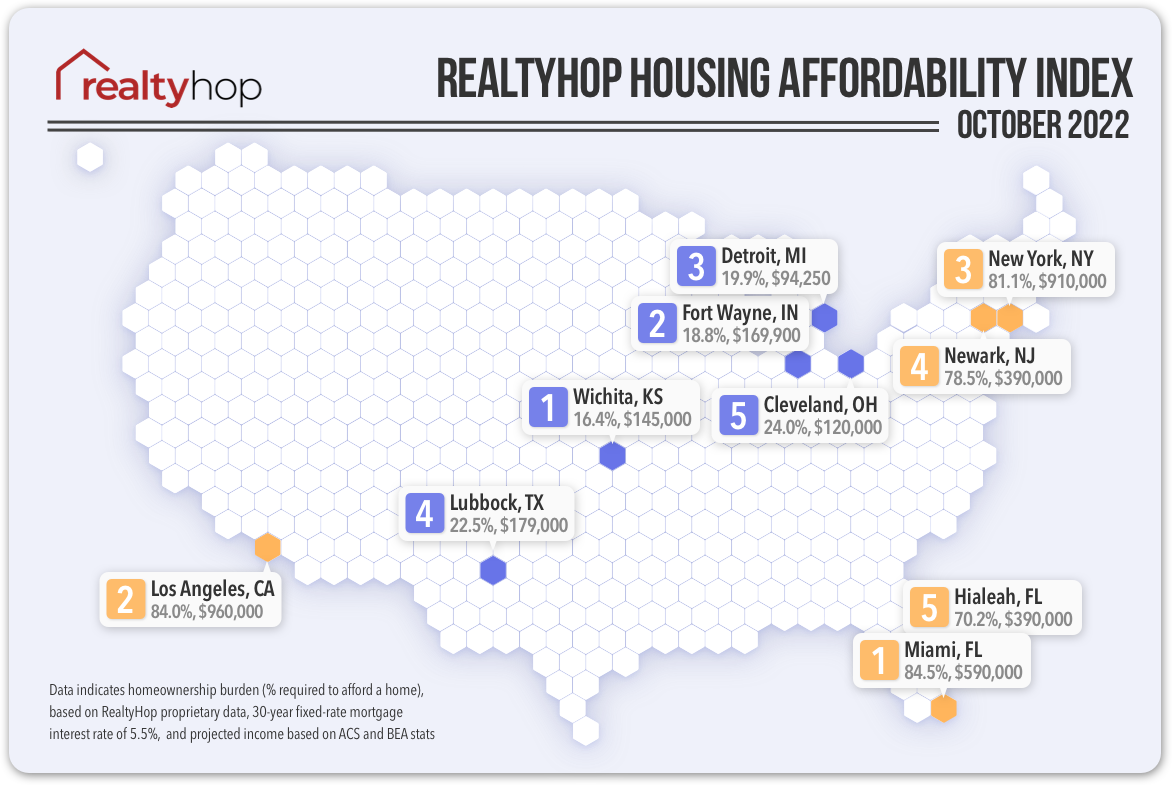 In the October edition of RealtyHop’s Housing Affordability Index, we examined the share of income U.S. households would have to spend on homeownership costs to find out:

This month, 60% of cities in the index became more affordable for homebuyers. The burden of homeownership decreased across cities like Seattle, Pittsburgh, Corpus Christi, Indianapolis, Los Angeles, and Miami, confirming last month’s indication of a potential housing recession.

Based on a 30-year fixed-rate interest rate of 5.5%, median list price, and projected household income, homeowners in 76 cities across the country must allocate at least 30% of their income toward homeownership costs. Between increasing interest rates, with some hitting close to 7%, and a decreasing number of home sales, both buyers and sellers must adjust their expectations to participate in a cooling market.

Yet again, Miami ranks as the least affordable housing market across the nation. While the median home price decreased 1.69% from $600,000 to $590,000, housing remains unaffordable for most residents across the city. The median household income for a Miami resident is $44,581, meaning a family looking to purchase a home in Miami will need to spend 84.52% of their annual income on homeownership costs.

For the fourth month in a row, Los Angeles remains the second least affordable city in the country. The median home price dropped $5,000 from last month and is now $960,000. With a 5.5% mortgage interest rate, an average L.A. family must set aside $4,880.39 monthly to afford a home, which equals 84.03% of their annual household income.

New York City continues to rank as the third least affordable city in the U.S., where the median purchase price of a home increased 1.11% from $900,000 to $910,000 in October. In a city where the average person generates a median household income of $68,129, someone who wants to purchase a house will have to allocate 81.14% of their annual income toward acquiring a home. New York City is one of two cities out of the least five affordable markets where housing became less affordable in October.

Newark also maintained its position this month as the fourth least affordable city across the country. The median asking price increased by $5,000 from last month, jumping up to $390,000. Considering the average Newark household member earns a median income of $38,854, a family should now plan to spend 78.52% of their income on homeownership costs. Newark is the second city out of the top five least affordable cities in the country where it became more expensive for residents to own a home this month.

Hialeah comes in yet again as the fifth least affordable housing market in October. The median purchase price of a home decreased by 3.43% from $466,000 to $450,000, making homeownership more affordable than in previous months. However, a citizen with a median salary of $40,036 per year must expect to allocate 70.21% of their income toward owning a home, which is still a considerable portion.

Wichita held onto its title to mark its second month as the most affordable city in the U.S. Wichita became more affordable for residents this month, where the median home sale price decreased by 4.92% from $152,500 to $145,000. In this city, residents who make a median salary of $59,861 will only have to set aside 16.36% of their income to afford a home. Out of all cities across the country, Wichita’s affordability increased more significantly than any other.

Fort Wayne also held its position from last month, making it the second most affordable city in October. Even though the median purchase price slightly increased to $169,900 this month, homeowners still allocate a reasonable portion of their income toward homeownership. Based on a mortgage interest rate of 5.5% on a 30-year fixed-rate loan, the average family in Fort Wayne will spend 18.84% of their income on housing.

Yet again, Detroit ranks as the third most affordable U.S. housing market. The median asking price increased from $89,999 to $94,250 this month, but homeownership remains accessible for the average household. In a city where the median salary comes in at $34,932, a resident can expect to set aside 19.93% of their income for homeownership costs like mortgage payments and taxes.

Lubbock is still the fourth most affordable U.S. city. The median sales price for a home rose 2.29% to $179,000 this month. Based on a 5.5% mortgage interest rate on a 30-year fixed-rate loan, prospective buyers in Lubbock should be prepared to spend 22.50% of their household income on the cost of owning a home.

Cleveland continues to earn its spot on the list of the most affordable cities across the country, coming in as fifth in October. The cost of a home increased $5,000 this month, and the median purchase price now hits $120,000. A Cleveland resident who earns a median salary of $35,305 can expect to set aside 4.35% of their income toward homeownership.

Corpus Christi residents can breathe a sigh of relief as housing became more affordable for residents this month. Coming in 71st on the list of the least affordable housing markets in the country, the city moved down five spots in the ranks from last month. The median price point for a home in this city decreased by 4.46% to $280,350. In this city, the average person generating a median income of $64,408 can expect to spend 31.10% of their income on housing, which comes out to $1,806.26 per month.

Homeownership became less attainable in San Jose this month, where the city bumped up two spots to become the 13th least affordable market in the country. The median price point for a home increased by 5.71% to $1,162,833, a considerable jump from last month’s median purchase price of $1,100,000. Based on a 5.5% mortgage rate, the average homebuyer in San Jose should expect to allocate 58.94% of their income toward affording a home.

After Washington D.C. became more affordable in September, the city jumped back up eight spots and even exceeded its August ranking, coming in as the 24th least affordable city in October. The median home price increased 1.52% this month, reaching $659,900. In this city, where the median salary is $93,182, the average homeowner will need to set aside 42.85% of their income for mortgage repayments and property taxes, which is 0.65% more than they would have needed to set aside in September.