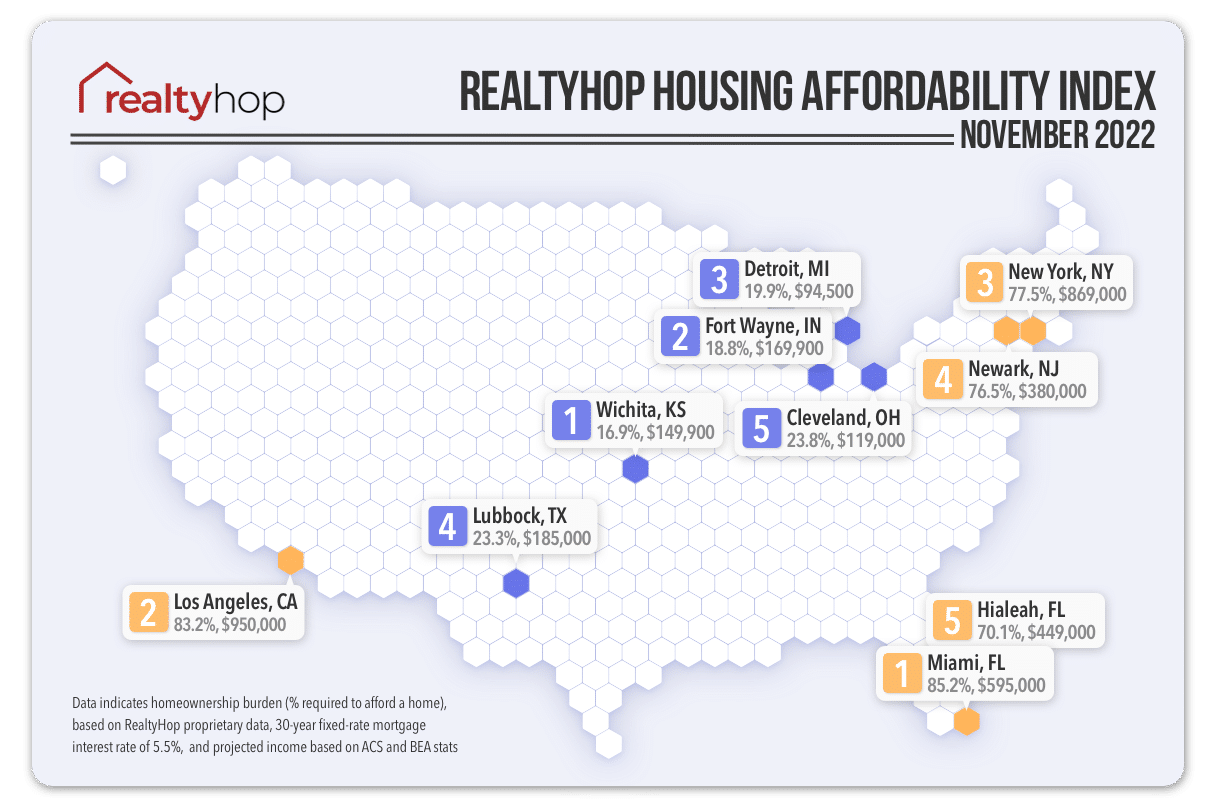 In the November edition of RealtyHop’s Housing Affordability Index, we examined the share of income U.S. households would have to spend on homeownership costs to find out:

This month, 57% of cities across the country became more affordable for homebuyers, while 33% became less affordable. Homeowners in cities like San Jose, Reno, Austin, and Houston can sigh relief as housing prices decrease.

Considering a 30-year fixed-rate mortgage with a 5.5% interest rate, median list price, and projected household income, homeowners in 75 cities across the country spend more than 30% of their household income on the cost of owning a home. As interest rates continue to climb, officially surpassing 7%, those who wish to participate in real estate transactions this season must consider current market conditions.

Yet again, Miami ranks as the least affordable housing market across the nation, which became even more unaffordable this month. This month, the median price for a home increased by 0.85% from $590,000 to $595,000. In a city where the median household income rests at $44,581, the average resident will have to direct 85.24% of their income to afford a home. Miami is the only city out of the top five least affordable housing markets where homeownership becomes more expensive this month.

For the fifth month in a row, Los Angeles is the second least affordable city in the country. Home prices in the city dropped $10,000 from last month’s report, where the median price for a property is now $950,000. Potential homeowners making the city’s median salary of $69,695 must allocate 83.15% of their income towards homeownership costs.

Yet again, Newark continues to rank as the fourth least affordable city nationwide. Housing costs decreased this month by 2.56%, where the median purchase price of a home dropped $10,000 from $390,000 to $380,000. In this city, the average resident generates a median salary of $38,854, meaning they must spend 76.51% of their income towards homeownership costs.

Hialeah also maintained its rank from the previous months, coming in with the fifth least affordable housing market. Housing became slightly more affordable this month, as the median purchase price decreased by 0.22% from $450,000 to $449,000. Homeownership is still costly in this city, though, as a homeowner with a median salary of $40,036 then spends 70.06% of their income on housing.

For the third month in a row, Wichita ranks as the most affordable city in the U.S. Wichita became slightly less affordable this month, where the median home sale price increased by 3.38% from $145,000 to $149,900. Residents with a median household income of $59,861 will spend 16.91% on their housing.

Fort Wayne also held its position from last month, making it the second most affordable city this month. The city also maintained its exact level of affordability from the previous month, where the median price of a home did not change and remains at $169,000. The average resident makes a median income of $57,533 and then spends 18.84% of their income on buying a home with a 5.5% interest rate.

Detroit held onto its spot as the third most affordable U.S. housing market. The median asking price increased slightly from $94,250 to $34,932 this month. In a city where the median salary comes in at $34,932, residents can expect to set aside 19.98% of their income for homeownership costs like monthly payments and taxes on a 30-year conventional mortgage.

This month, Lubbock still ranks as the fourth most affordable nation in the country. The cost of homeownership increased this month, where the median price of a home went from $179,000 to $185,000. Homeowners who generate a median salary of $57,685 will spend 23.26% of their income on housing in this city, which equates to a monthly payment of $1,118.13.

Cleveland also holds onto its spot on the ranking, coming in yet again as the fifth most affordable housing market. Cleveland is the only spot on this list where housing became more affordable this month, where the median price of a home decreased 0.83% from $120,000 to $119,000. In this city, someone making a median income of $35,305 directs 23.76% towards homeownership.

Jersey City residents will have to tighten their budgets this month as homeownership becomes more expensive for residents. The median purchase price for a home increased 5.91% from $660,000 to $699,000 this month. An average resident with a median income of $78,098 must now allocate 63.83% of their income toward buying a home. The city’s shift in affordability boosted it three spots in our ranking, moving from twelfth to ninth. Jersey City now ranks as one of the ten most unaffordable housing markets in the country.

Those living in Minneapolis can now afford more house with their budgets, as this city witnessed the most significant change in their housing market this month. Last month, the median purchase price of a home came in at $320,000, but that number has decreased by 6.25% this month to $300,000. An average citizen who makes the median salary of $71,961 now only spends 28.37% of their income on housing, which equates to $1,701.28 per month.

Portland witnessed a significant change in the rankings this month, dropping seven spots from the 34th most expensive housing market this month to the 41st in November. The cost of homeownership decreased 4.72% from $524,690 to $499,950. In this city, residents who generate an income of $82,545 will now direct 39.48% toward their mortgage and property taxes.