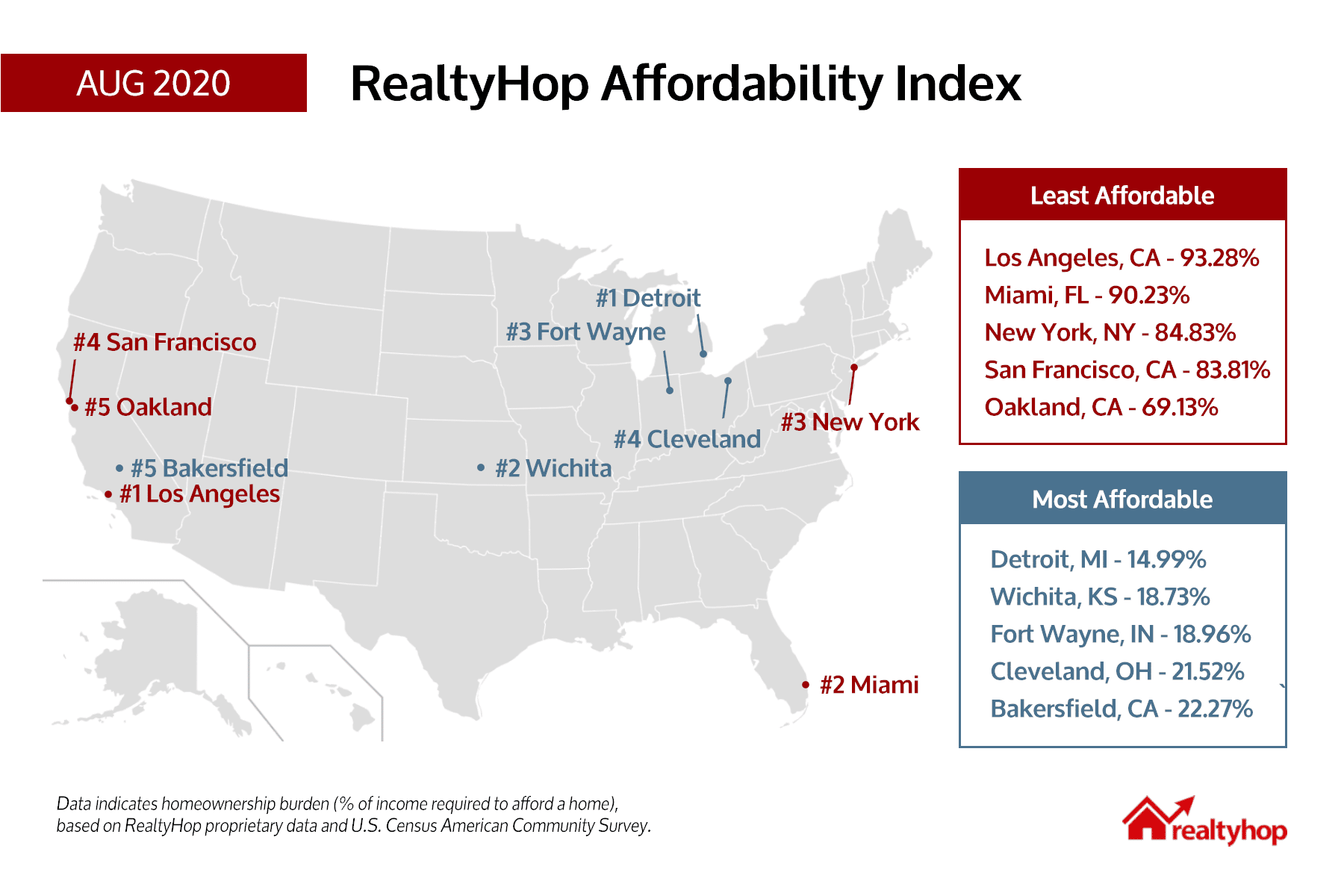 In this August installment of the RealtyHop Housing Affordability Index, we investigate the decision to purchase a home in the 100 most populous cities across America. Is homeownership affordable or even possible for the average family in each city? Every month we analyze proprietary RealtyHop data alongside comprehensive U.S. Census data to find out. See how your city fares in affordability.

Los Angeles, CA  was yet again the least affordable housing market in the United States this month. Home prices increased slightly to a median of $917,500, leading to a 0.27% increase in affordability index. Given median household incomes of $54,501, alongside local taxes and mortgage rates, the average family in LA should expect to spend 93.28% of their annual income on the costs of owning a home.

Miami, FL  saw an increase in median home prices to $524,000 over the month, compared to $519,000 last month. Resident families in Miami should expect to pay an average of $2,556 per month in mortgage and tax costs in order to own a home, equating to 90.23% of total household income annually.

New York, NY  saw a small decrease in real estate prices to a median of $895,000. This led to a 0.44% drop in the city’s affordability index. Given median household income of $57,782, as well as local taxes and a standard mortgage, the average NYC family would need to spend 84.83% of income annually in order to own a place in the city.

San Francisco, CA  remained the fourth least affordable market, despite a decrease in home prices from $1.498M to $1.475M over the month. This change led to the city’s affordability index dropping 1.54%. The average family in SF should expect to pay $6,724 per month on housing costs if they plan to own a home.

Oakland, CA  became more expensive for homeowners this month, increasing one spot to fifth place. Given household income of $63,251, median real estate prices at $759,000, as well as mortgage and tax rates, a family in Oakland should expect to pay $3,644 per month, or 69.13% of income, toward housing costs.

Detroit, MI  was the most affordable market for homeowners this August, with a low affordability index of 14.99%. While median home prices increased for the second month in a row to $57,500, the city remains far and away the most affordable in the country.

Wichita, KS  came in as the second most affordable city this month, despite a 2.41% rise in affordability index. The increase was due to a hike in home prices from $145,000 to $148,500 over the past month. Given household incomes, mortgage rates, and local taxes, the average family in Wichita would only need to allocate 18.73% of income towards homeownership costs.

Fort Wayne, IN  placed third on our least expensive list, coming in close behind Wichita at 18.96%. Despite an increase in home prices to $149,000 this report, strong median incomes of $45,853 were enough to balance this out.

Cleveland, OH  experienced an increase in real estate prices for the second month in a row, settling at a median of $92,000. Despite this hike, Cleveland remains one of the best options for homebuyers with housing expenses representing only 21.52% of annual income for the average family.

Bakersfield, CA  came in fifth place on our most affordable list, as real estate prices increased slightly from $220,000 last month to $224,000. Assuming median income of $60,058, as well mortgage and local taxes, the average family in the city would need to spend only 22.27% of income on housing costs.

Cincinnati, OH increased nine spots to 62nd place, as home prices jumped to $170,000 from $155,000 last month. A family looking to purchase a home in the city should expect to allocate a reasonable 30.43% of annual income toward homeownership costs, given standard mortgage rates and local taxes.

Irvine, CA saw a 5.26% decrease in its affordability index this month, as the city fell from 11th place to 14th place on our list. The change was due to a drop in median home prices to $900,000.

Lexington, KY increased five spots to 72nd place this month, with its affordability index jumping 6.43%. Real estate prices rose to $265,000, up from $240,000 last month. Despite this, the city remains an affordable option for homebuyers at an index of 28.87%.