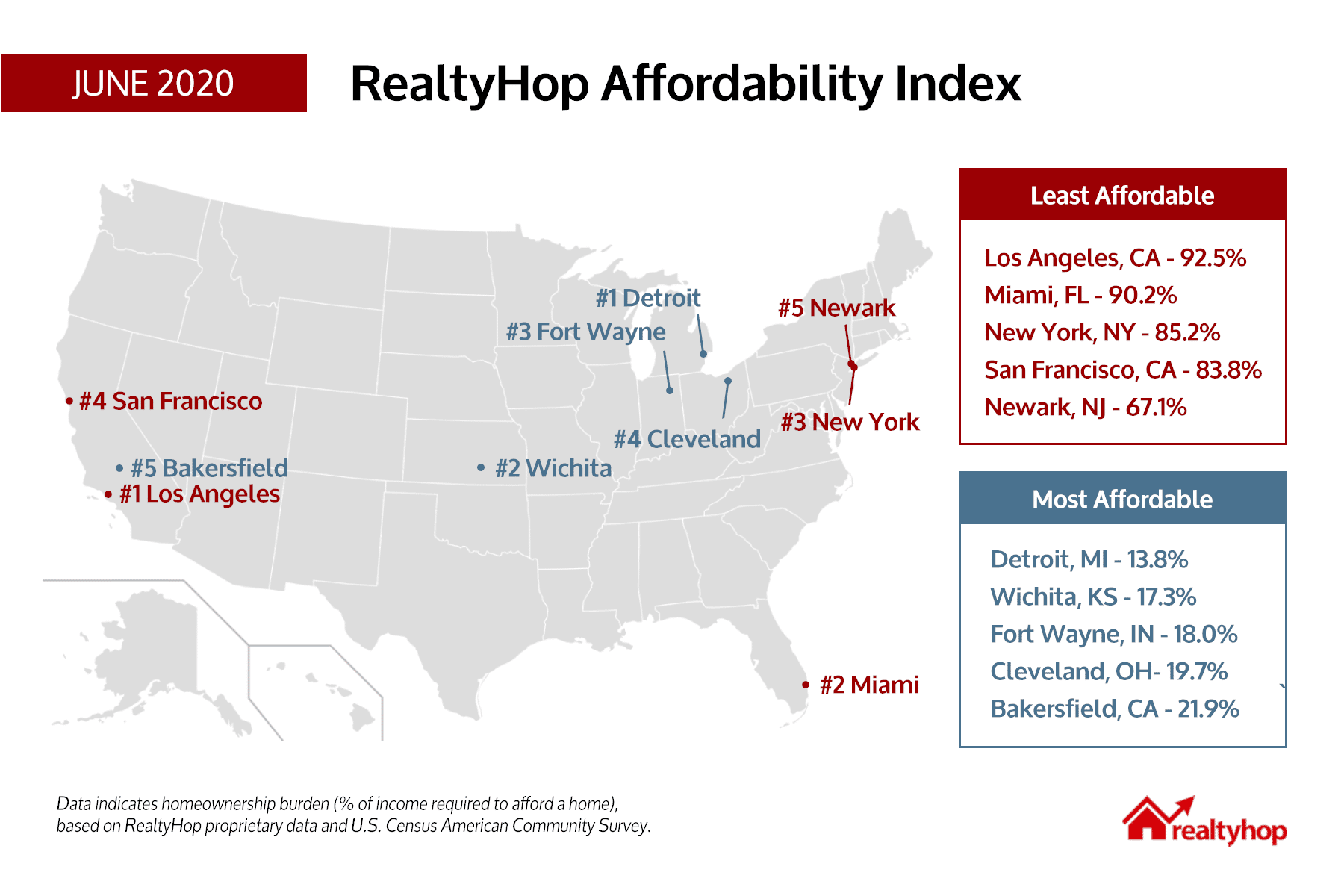 Los Angeles, CA  was the least affordable market yet again this month, continuing its reign for the fourteenth straight month. Real estate prices decreased slightly to a median of $910,000 from $915,000 last month, leading to a 0.55% drop in homeownership burden. The average family in the city would need to allocate 92.52% of total annual income in order to own a home.

New York, NY  remained stable despite the ongoing COVID-19 pandemic. Though real estate prices have not materially decreased, new overall listing volumes have come down, signalling that NYC homeowners are waiting out the crisis in order to sell. Current owners are also holding onto higher asking prices in the hopes that the market will recover.

The median asking price in NYC this month was $899,000, meaning that given standard taxes and mortgage rates, a family would need to spend $4,103 per month in order to own a home in the city.

San Francisco, CA  saw a moderate 1.72% increase in its homeownership burden, driven by an increase in home prices to $1.475 million. Given household incomes of $96,265, alongside local tax and mortgage rates, the average family in SF would need to spend $6,723 per month in order to own a home. This equates to roughly 84% of median household income.

Newark, NJ  remained steady as the fifth most expensive city this June. Asking real estate prices increased this month to a median of $320,000, up from $317,500 last month. This led to a 0.79% increase in homeownership burden for the city.

Detroit, MI  was the cheapest market to own a home yet again this month. Median real estate prices increased to $52,900. Given a standard mortgage, as well as local tax rates, the costs of owning a home in Detroit were only $320 per month, or about 13.79% of annual household income.

Wichita, KS  was the second most affordable city on our list, with a homeownership burden of just 17.28%. Median household income in the city was strong at $48,982, particularly as real estate prices hovered at $137,000. Given a mortgage and local taxes, the typical Wichita household would only need to spend $705 per month on homeownership costs.

Fort Wayne, IN  saw a 1.9% increase in its affordability index this month, as home prices increased to $142,600 from $139,945 in our last report. Given a standard mortgage, local taxes, and median annual incomes in Fort Wayne, the average family should expect to allocate $689, or 18.04% of the median household income to own a property.

Cleveland, OH  remained steady as the fourth most affordable market for homeowners, despite a 5.31% increase in homeownership burden this month. Median real estate prices were $84,250, alongside household income of $27,854. The average family in Cleveland would only need to spend $457 on housing costs, or 19.71% of annual income.

Bakersfield, CA  rounds out the top five affordable cities for the second straight month. Real estate prices rose slightly, leading to a modest 0.92% increase in homeownership burden. The average family in Bakersfield would need to allocate $1,094 per month toward the costs of owning a home, equating to 21.87% of annual income.