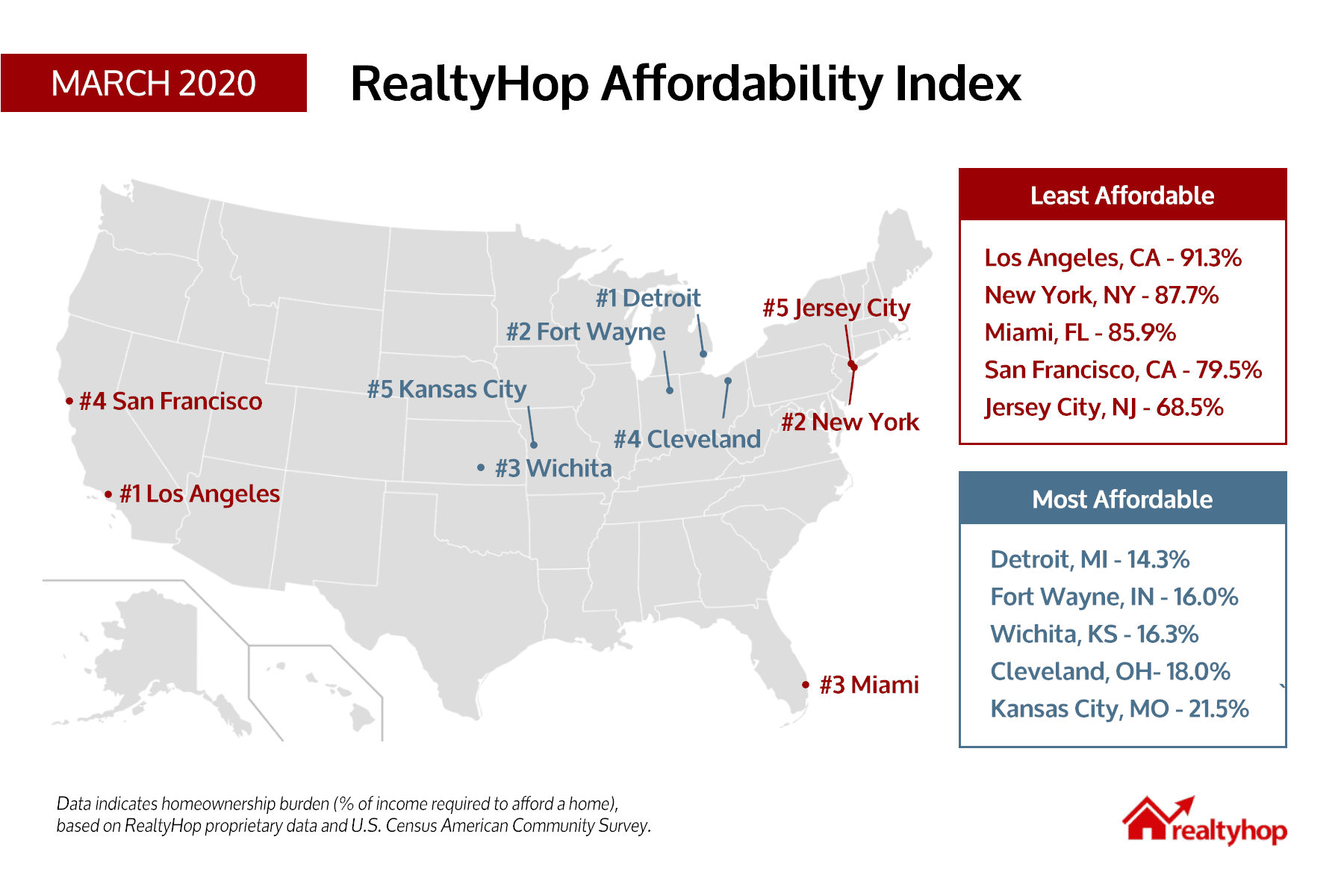 In this March installment of the RealtyHop Housing Affordability Index, we investigate the decision to purchase a home in the 100 most populous cities across America. Is homeownership affordable or even possible for the average family in each city? Every month we analyze proprietary RealtyHop data alongside comprehensive U.S. Census data to find out. See how your city fares in affordability.

Los Angeles, CA  continued to be the most cost burdened city in the United States for homeowners this March. The city saw its affordability index jump to 91.33%, meaning the average household in LA would need to allocate over 91% of total annual income toward homeownership costs. In reality, this means most families in the city do not have the option to buy, and will need to continue renting.

New York, NY  came in as the second least affordable market. While median income was strong at $57,782, real estate prices at $925,000 made homeownership difficult. The average family in New York would need to spend 87.68% of total annual income to own a home.

Miami, FL  saw its affordability index remain stable over the past month, down just 0.2%. Given household income of $33,999, and home prices of $499,000, the average family in Miami should expect to spend 85.93% of total income to cover homeownership costs

San Francisco, CA  continued to command the highest real estate prices of any major city in the country at $1.399 million. Strong household incomes were not enough to outweigh this, as the city’s affordability index came in just shy of 80%. The average family would need to spend $6,377 per month in order to own a home.

Jersey City, NJ  placed as the fifth most cost burdened housing market, with its index remaining stable at 68.51%. The average family in Jersey City would need to spend $3,582 per month in order to cover the mortgage and local tax costs associated with homeownership.

Detroit, MI  experienced a hike in real estate prices over the past month, driving its homeownership burden 4.76% higher. Despite this increase, an average family in the city would only need to allocate 14.34% of total annual income toward the costs of owning a home.

Fort Wayne, IN  became the second most affordable housing market in the country this March. Affordable real estate prices at $126,500, coupled with household incomes of $45,853, made Fort Wayne a strong location to purchase a home. The city’s affordability index came in at 16%, a slight 1.28% increase over February.

Wichita, KS  fell one spot on our most affordable list, as real estate prices increased to a median of $129,500. As a result, the city’s homeownership burden jumped 3.6% month over month to 16.33%. The city still remains a great place for a family to purchase a home.

Cleveland, OH  became more affordable for homeowners over the past month, as prices dropped from $79,900 in February to a median of $77,000. An average household in the city would need to spend only $418 per month, or 18% of total annual income, in order to own a home.

Kansas City, MO  rounded out our top five most affordable markets. The city saw a favorable affordability index of 21.49%, driven by strong household income of $50,136, and affordable housing at a median of $174,900.

New Orleans, LA increased six spots to take 52nd place on our list, due to a jump in home prices. An average household in New Orleans would need to allocate $1,002 per month toward mortgage and tax costs, or about 31% of total annual income.

Oklahoma City, OK jumped five spots to 85th place this month. The city became less affordable as home prices increased to $209,900, compared with $205,000 last month. This led to a 2.39% increase in its affordability index.

Cincinnati, OH dropped three spots to 72nd place. An average household in the city should expect to allocate a reasonable 26.83% of annual income toward the costs of owning a home.

Omaha, NE came in 87th place on our list this month, a drop of six spots. A family in Omaha would only need to spend $1,058 on mortgage and tax costs each month, equating to roughly 23.61% of income.