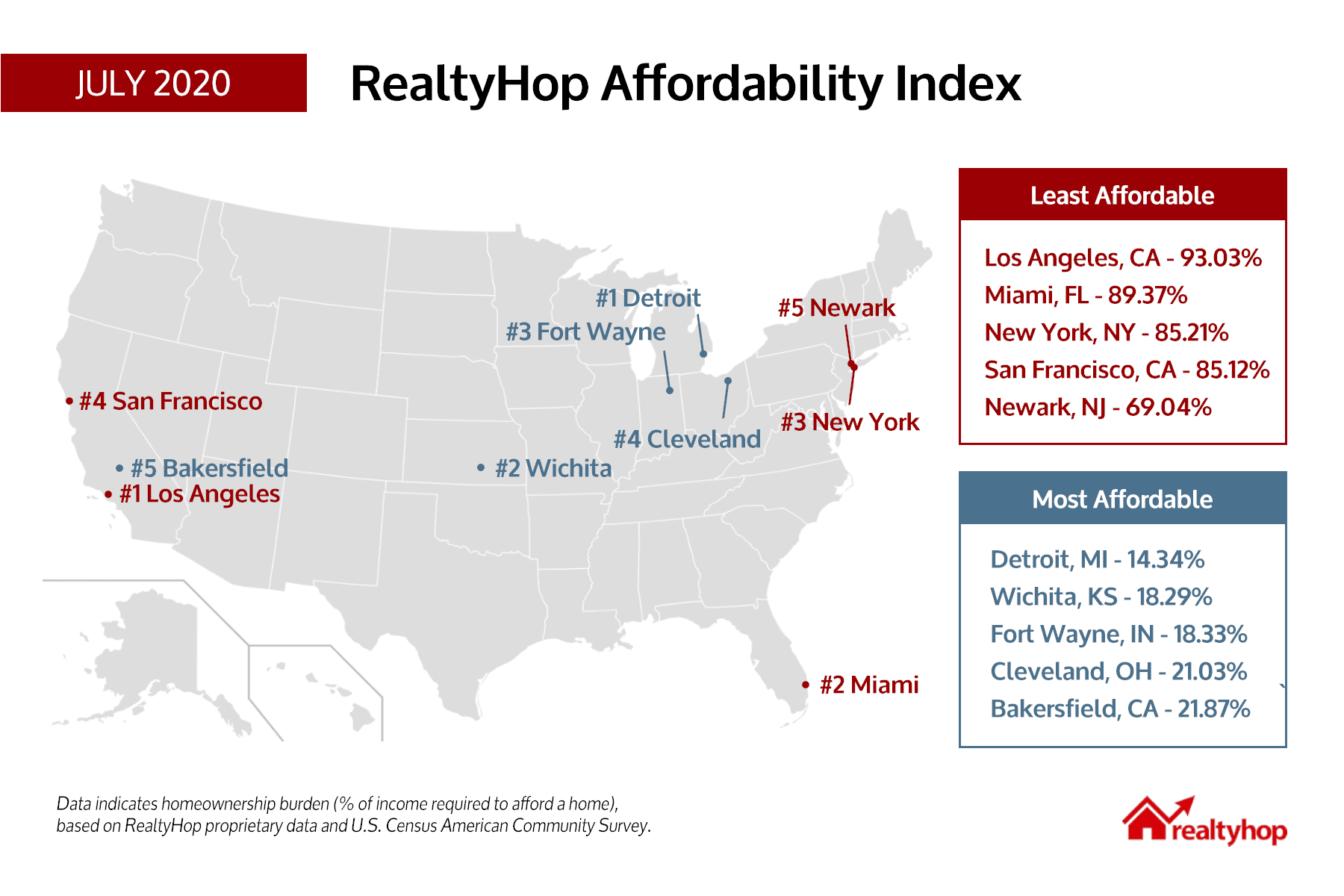 Los Angeles, CA  was the least affordable market this July, experiencing a slight 0.55% increase in it’s affordability index. Given median home prices of $915,000, household income of $54,501, as well as local taxes and mortgage rates, the average family would need to spend 93.03% of annual income to own a home. In other words, homeownership is out of reach for many in Los Angeles.

Miami, FL  saw a minor drop in home prices to a median of $519,000, however still came in as the second least affordable market in the country. An average family in the city would need to allocate 89% of income towards homeownership costs, or $2,532 per month.

New York, NY  continued to be stable despite the pandemic affecting operations. As we reported last month, many owners are holding out with higher prices, or are waiting until a later time to list their property. We will continue to monitor inventory and prices with each subsequent report.

NYC real estate prices remained unchanged from last month at a median of $899,000. Assuming median income of $57,782, along with local taxes and mortgage rates, a family in the city would need to spend over 85% of annual income in order to own a home.

San Francisco, CA  experienced a jump in home prices to a median of $1.498M, the highest of any city on our list. This led to the city’s affordability index increasing 1.56% this month to 85.12%. An average family in San Francisco would need to spend over $6,828 per month on mortgage and tax costs associated with homeownership.

Newark, NJ  saw a hike in real estate prices from a median of $320,000 last month to $329,450 this month. Given household incomes of $34,826, alongside mortgage and tax rates, the average family in Newark would need to spend 69% of annual income towards homeownership costs. This marked an increase of 2.95% over last month’s number.

Detroit, MI  was the most affordable market to own a home again this month, despite real estate prices increasing to $55,000. Given standard mortgage rates, as well as local taxes, homeownership costs in Detroit were only $333 per month, or 14.34% of annual household income. This was considerably cheaper than the second most affordable city, Wichita.

Wichita, KS  was the second most affordable city on our list, even as the city’s homeownership burden increased 5.84% due to a hike in home prices. An average family in Wichita should expect to allocate 18.29% of annual income towards the costs of owning a home. This equates to an affordable monthly payment of $746.

Fort Wayne, IN  saw a 1.61% increase in its affordability index, as home prices increased to $144,900 this month. Alongside household income of $45,853, mortgage and tax rates, a family in Fort Wayne should expect to spend roughly 18.3% of annual income on homeownership costs.

Cleveland, OH  saw a spike in real estate prices, yet remained the fourth most affordable market in the country this July. Median asking prices increased from $84,250 last month to $89,900 this month. Such an increase led to the city’s affordability index jumping 6.71%. An average family in Cleveland would need to spend $488 per month on mortgage and taxes, or 21.03% of annual household income.

Bakersfield, CA  rounds out the top five affordable cities again this July, as real estate prices remained steady in the month. Assuming median income of $60,058, as well as current asking prices, a family in Bakersfield would need to spend $1,095 per month, or 21.87% of household income, on the costs of owning a home.

Raleigh, NC dropped seven spots to 68th place, as the city became more affordable due to a drop in real estate prices. Given standard mortgage and local tax rates, a family in the city should expect to allocate $1,501 per month on housing costs, or 29.3% of annual household income.

Arlington, VA increased six spots to 49th place this month. Median home prices came in at a steep $675,000, however strong household incomes of $112,138 evened things out. A family in Arlington can expect to pay 34.38% of annual income in order to own a home in the city.