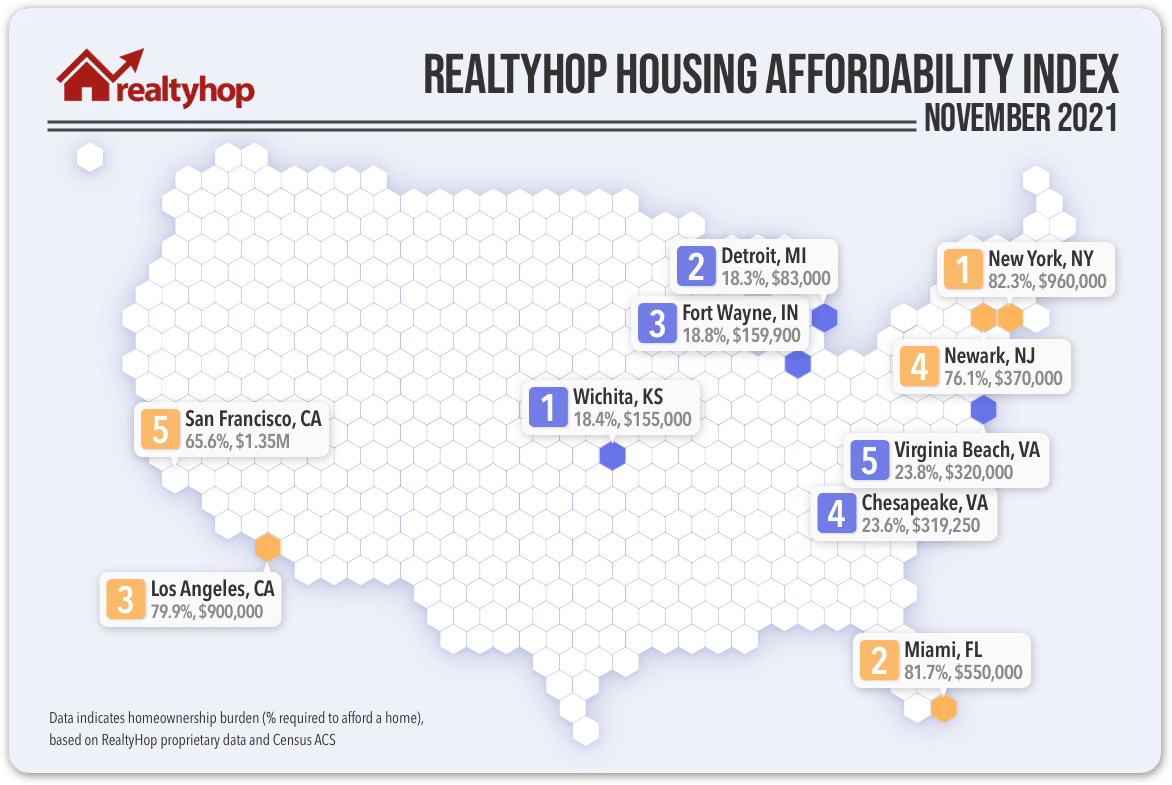 In this November installment, we analyzed the least and most affordable housing markets in the 100 most populous cities in the United States using proprietary RealtyHop data and U.S Census data to find out:

This month saw very little change from October 2021, with the least and most affordable housing markets remaining almost the same. Read on to see if your city makes the list.

No surprise here. New York is the least affordable housing market in the country for the fifth month in a row, with the average home costing $960,000. A New York family would need to spend 82.32% of their income on homeownership in this city.

For the second month in a row, Miami is the second least affordable housing market in the U.S. While the average home price, at $550,000, is far less than New York City, a household in Miami can expect to pay 81.69% of its total income in housing costs.

Average housing prices fell from $915,000 last month to $900,000 this month, but Los Angeles remains in the third spot for the most unaffordable housing markets in the country. A household in this city can expect to pay 79.85% of its income toward mortgage expenses and taxes.

Newark retains the fourth position for another month. The percentage of income toward housing costs increased 5.71% as compared to last month, with homeowners having to pay 76.07% of their income towards owning a home.

San Francisco, CA moved back into the Top 5 Least Affordable Housing Markets this month.  The percentage of income as a share of homeownership is lower than the other Top 5 Cities, at 65.56%, but the average median home price is the highest, at $1,350,000.

Wichita remains the most affordable city in the United States according to our data, despite a rise in the share of income to homeownership as compared to October 2021. A family in Wichita can expect to spend 18.17% of its income on homeownership, making it a very affordable place to settle down.

The median home price in Detroit rose again this month to $83,000, but it still retains the second spot on the list. This means a household can expect to pay 18.26% of their income towards owning a home.

Fort Wayne is seeing housing prices and the share of income in relation to homeownership go down. The median list price decreased from $164,950 last month to $159,900 this month.  Buyers looking to own a home in Fort Wayne should expect to pay $771.94 per month for housing expenses.

Chesapeake, VA moves up two spots on our list from last month. The median list price fell to $319,250 and the amount a family spends on homeownership per month is also down slightly, at $1,547.11.

Fort Worth became more affordable this month, moving four spots.  With homes only lasting about 21 days on the market before selling, this is a hot market.  The average list price for a home is $300,000.

Baltimore jumped seven spots this month to become more affordable. Housing prices fell to $205,000 and prospective homeowners now need to spend 26.07% of their income on owning a home, a 6.78% drop from last month.