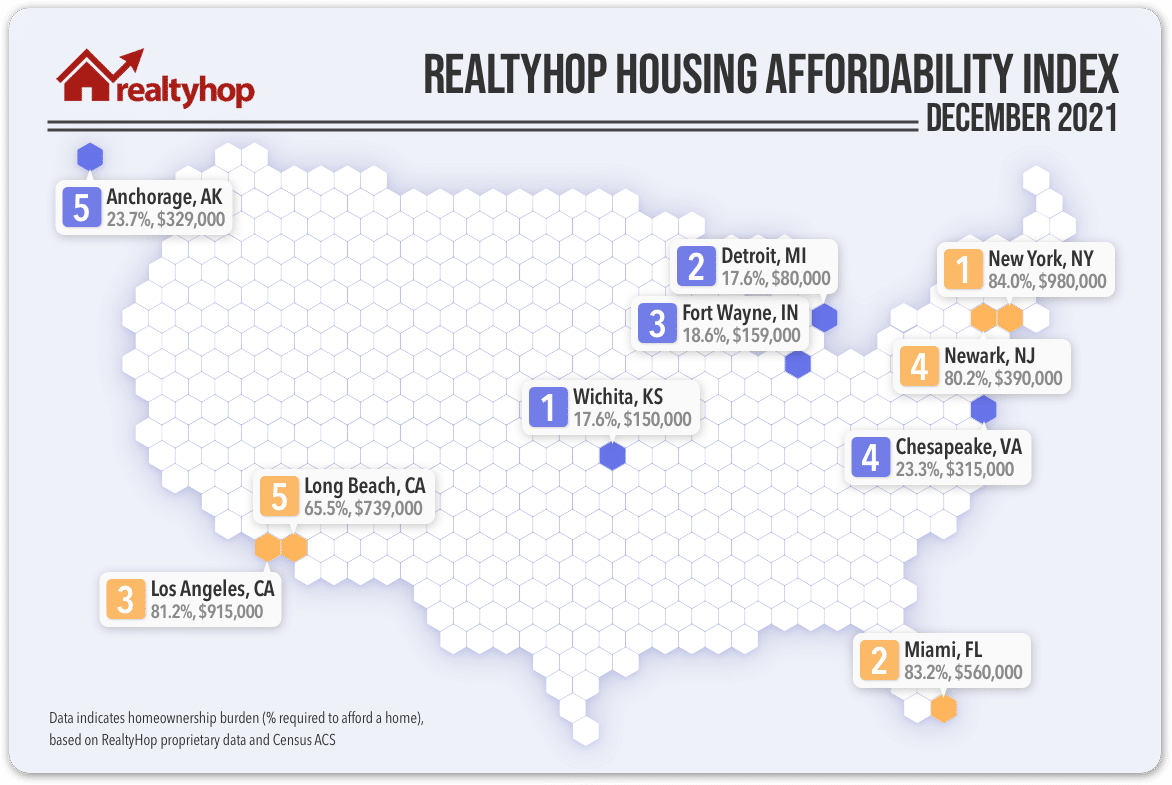 In this December edition of the RealtyHop Housing Affordability Index, we analyzed the least and most affordable housing markets in the 100 most populous cities in the United States using proprietary RealtyHop data and U.S Census data to find out:

This month saw very little change from November 2021, with the least and most affordable housing markets remaining almost the same. Due to inventory shortage and supply chain issues, however, unaffordable cities became even more unaffordable. Where did your city fall on the list this month?

For the sixth month in a row, New York ranks the #1 least affordable housing market in the United States according to our data. The average home price increased by $20,000 from last month, now topping out at $980,000. In order to own a home in the Big Apple, a family would need to contribute 84.03% of their income, which is up 2% from November.

Miami remains the second most unaffordable market for the third month in a row. The average home price, at $560,000, is also up for this city as compared to last month. The share of income as compared to homeownership also increased and is now at 83.18%.

Los Angeles continues to be one of the least affordable housing markets in the nation. Home prices are back up to a median of $915,000 for December 2021. An average family in Los Angeles can expect to set aside $4,204 per month for mortgage repayments and property taxes, or 81.18% of their annual household income.

Once again, Newark ranks as the fourth least affordable city in the United States. With an average home price of $390,000, the cost to own a home in relation to income rose by 5.41% since last month, to 80.18%.

Knocking San Francisco out of the Top 5, Long Beach, another California city, became less affordable this month. While the price of owning a home is far less than in San Francisco, a family will spend 65.49% of their income to own a home in this city.

Wichita retains its spot as the most affordable housing market in the country. With an average home price of $150,000 and a percentage of income to homeownership of just 17.58%, Wichita remains very affordable for a family to buy a house.

Housing prices in Detroit fell this month to $80,000, compared to $83,000 in November. A household can expect to pay $453 per month or 17.60% of their income towards owning a home. This percentage fell 3.61% as compared to last month, making homeownership in Detroit even more attractive.

For the second month in a row, Chesapeake, VA ranks the fourth affordable city in the U.S. The median list price declined slightly this month to $315,000. Buyers in the Chesapeake market can expect to pay about $1,526.52 per month to own a home.

Anchorage is back on the list as one of the most affordable housing markets. With a median home price of $329,000, a family in Anchorage looking to own should allocate 23.66% of their annual income toward housing costs.

Philadelphia moved nine spots this month in our affordability rankings and became more affordable. With a median list price of $260,000, a Philly family has to spend 32.99% of its annual income toward housing. This number is 3.35% lower than the previous month.

Tampa became more affordable. The city improved seven spots this month in our affordability rankings. With a median asking price of $365,000, a family looking to buy in Tampa should set aside 39.44% of their annual income to cover mortgage payments and property taxes.

Pittsburgh became a more affordable city to buy in this month, moving eight spots on the list. The median list price is $225,000 with 28.73% of a household’s income going towards homeownership.  This is a decrease of 5.86% as compared to last month.