What is the Relationship Between Stocks and Bonds?

When all else is equal, stocks are generally considered the investment class with a higher potential for long-term growth. On the other hand, Bonds are considered the asset class with very limited growth potential but general structural security. The trade-off between one and the other should be obvious. The question that remains, it seems, is how much does a change in the value of one affect the other?

Frankly, there is no single answer that will satisfy every investor. However, there are still a few basic principles that are almost universally accepted across the investment world. Let’s take a closer look at what stocks are, what bonds are, their relationship, and how this notable relationship might influence your overall investment strategy.

Stocks are a speculative investment, usually directly connected to the financial value of a company or, in the case of indexes, a broader collection of several companies. When you own a stock, being a speculative investment, your wealth can increase or decrease over time, depending on how conditions (both direct and indirect) relating to the underlying company or companies change over time.

Generally speaking, stocks increase in value over time, which is why so many people are interested in actively trading them. On average, the S&P 500 Index—roughly representing the 500 most valuable companies in the United States and often considered one of the most accurate readings of the “stock market” as a whole—increases in value by about 10 percent per year. However, there will undoubtedly be years where the stock market’s growth is higher than this and years where the growth is lower or even negative. The high probability of growth is why value-seeking investors turn to the stock market. But the possibility of greater losses is why the stock market will usually be just a portion of most investors’ overall portfolio.

Bonds are different from stocks in the sense that, while investing in bonds can potentially increase your future wealth, they are much less speculative than their stock counterparts. Bonds can be issued by corporations, but are also often issued by federal, state, and local governments.

When you invest in a bond, you are “guaranteed” that your wealth will increase to a predetermined value at a predetermined point in time. Of course, there is always a risk that the bond won’t pay out as promised (known as a default), which is why there are many organizations that rate these bonds’ degrees of riskiness. For example, you might consider investing $1,000 in bonds today with the promise that, in 10 years, the bond-issuer will pay you $1,100.

Is this a wise investment? You’ll never find a universal answer to that question. Some bonds are considered junk bonds, while others are considered to be nearly guaranteed. For instance, a bond issued by the U.S. Federal Government is as close to a “guaranteed” investment as you’ll find, while a bond connected to a risky start-up will have a much lower rating. Regardless, bonds represent a somewhat controlled investment with a promised rate of return in the future. Whether that makes them better than stocks remains up to you.

Currently, three major companies rate the riskiness of bonds–Moody’s, Standard & Poor’s (S&P), and Fitch. Generally speaking, bonds with AAA ratings will be considered the less risky, bonds that have B ratings will be regarded as speculative but still likely to pay out, and bonds with a C rating or lower will be considered “junk bonds” with a higher degree of risk. Be sure to check these ratings before deciding whether or not to make any bond-related investments.

What Is the Value Relationship Between Stocks and Bonds?

When markets are volatile—as they have been over the past few months—investors will often shift their wealth from stocks to bonds in order to minimize their exposure to uncertainty. For investors, stocks are considered the “high risk, high reward” investment, while bonds are considered the “low risk, low reward” alternative.

Ultimately, this causes stocks and bonds to have an inverse relationship. When it appears the market is stable and moving in a generally bullish direction, investors will take their money out of low-interest bonds and bet on the growth of high-performing companies. This causes the overall demand for bonds to drop, thus lowering their current prices (often called the “spot price”). 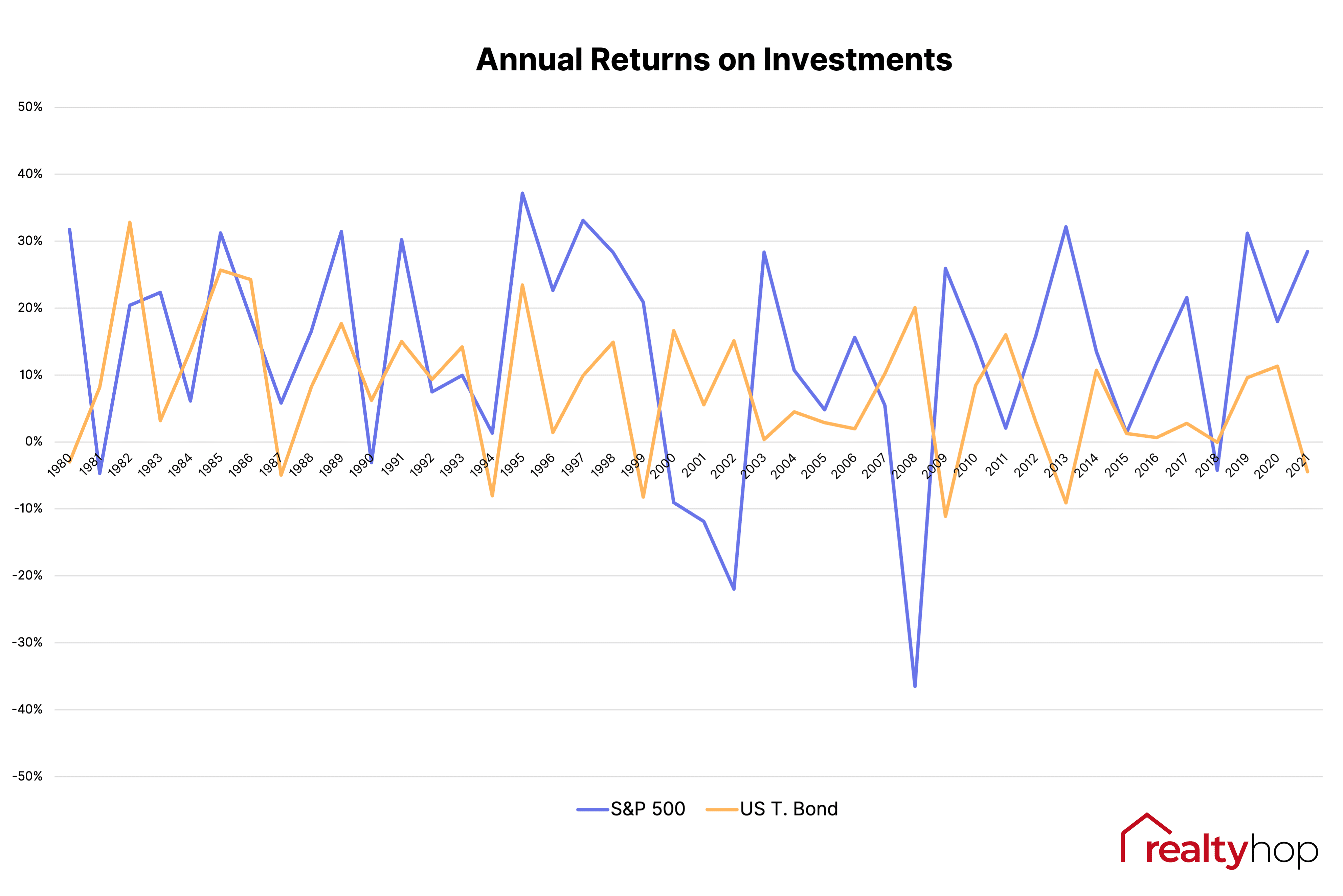 At the same time, when it appears the stock market has become increasingly risky or bearish (and the risk is not being adequately compensated), investors will move away from stocks and instead store their wealth in bonds, which they will almost certainly consider to be a safer investment vehicle.

The Bottom Line: How Should I Allocate My Current Wealth?

Ultimately, whether investing in stocks or bonds will make the most sense will depend on many factors, including ongoing market conditions, your level of risk tolerance, and your long-term financial goals. In most cases, investors will hold positions involving both stocks and bonds and simply make adjustments (often very small adjustments) as time goes on.

Should I Replace My Home’s Windows?

Does Governor Hochul Have a Plan to Address New York’s Housing Shortage?

Everything You Need to Know About Real Estate Purchase Agreements