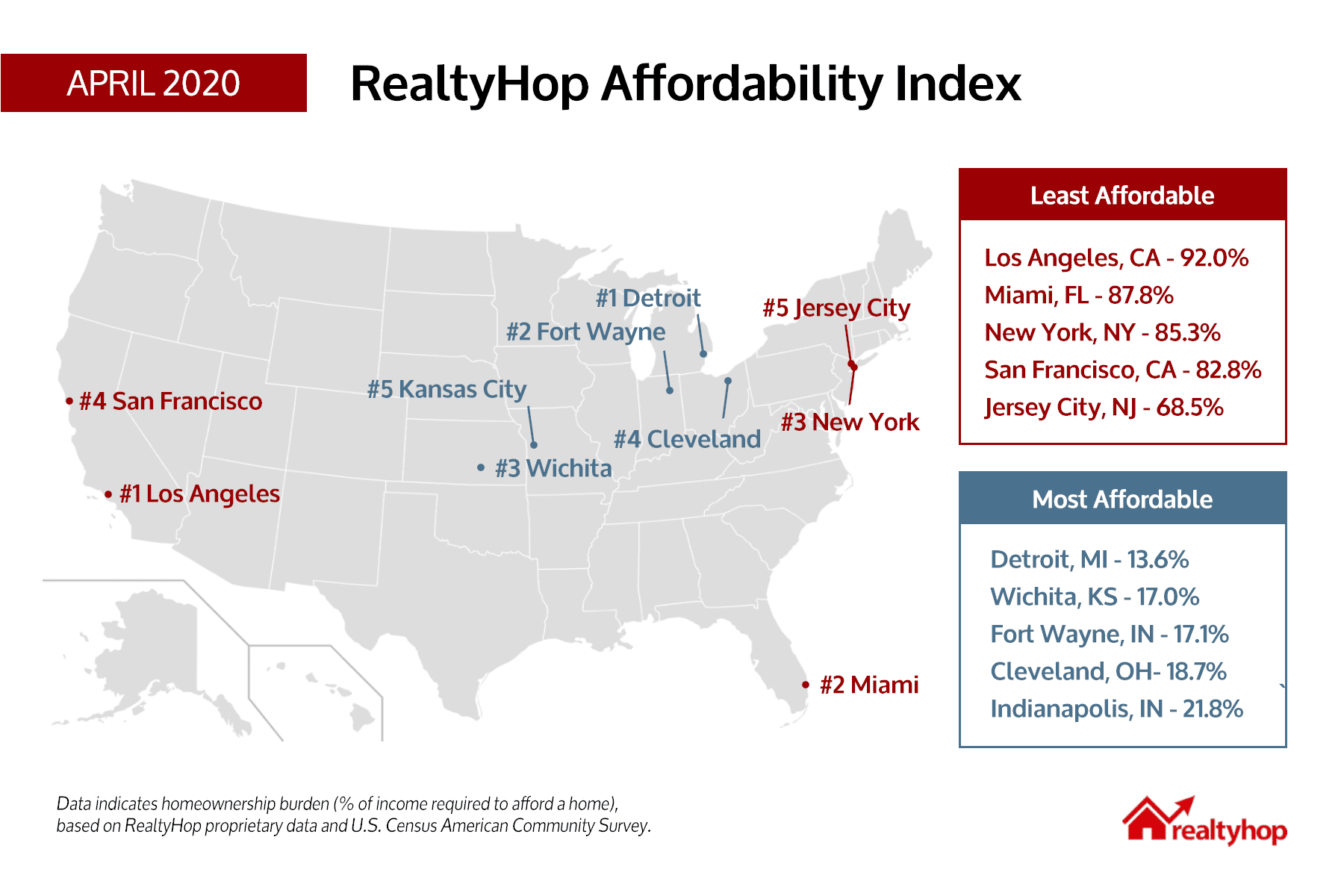 In this April installment of the RealtyHop Housing Affordability Index, we investigate the decision to purchase a home in the 100 most populous cities across America. Is homeownership affordable or even possible for the average family in each city? Every month we analyze proprietary RealtyHop data alongside comprehensive U.S. Census data to find out. See how your city fares in affordability.

Los Angeles, CA  remained atop our list as the least affordable housing market in the country. Over the past month, home prices rose slightly to a median of $905,000. Given local tax rates, a standard mortgage, and median incomes in L.A., the average family in the city would need to spend 92.01% of their total annual income in order to own a home.

Miami, FL  increased one spot this April to overtake New York as the second least affordable homeownership market. Given median household incomes of $33,999, alongside home prices of $510,000, an average household looking to own would need to spend 87.82% of income toward mortgage and tax costs.

New York, NY  experienced a decrease in real estate prices over the month, dropping from a median of $925,000 in March to $899,888 now. Given this, the city became more affordable, leading to its index decreasing 2.71%. Despite being cheaper, an average household in New York would still need to spend 85.3% of income each year in order to own a home.

San Francisco, CA  came in as the fourth most expensive city for homeowners in the country this April. Despite a high median household income of $96,265, expensive real estate prices make homeownership incredibly difficult in the city. A typical household in San Francisco would need to allocate a staggering $6,643 per month toward the costs of owning a home.

Jersey City, NJ  remained the fifth most expensive city for homeowners. Given mortgage and local tax rates, an average family in Jersey City would need to spend $3,582 per month in order to own a home, equating to 68.51% of total annual income.

Detroit, MI  became more affordable in the month, seeing a decrease in real estate prices to a median of $52,000, erasing some of its recent price gains. To own a home in the city, the average household in Detroit would only need to spend 13.56% of their total annual income.

Wichita, KS  regained the second most affordable spot after placing third in March. Despite this, real estate prices increased to a median of $135,000, leading to a 4.25% jump in the city’s affordability index.

Fort Wayne, IN  remained an affordable option for those families looking to purchase a home. Given local tax and standard mortgage rates, an average household in Fort Wayne only needed to spend $652 per month on homeownership costs, or 17.06% of annual income.

Cleveland, OH  came in as the fourth most affordable market in the country this April. Affordable housing at a median of $79,900, coupled with household incomes of $27,854, made Cleveland a particularly attractive location to own a home. The average family in the city would only need to allocate 18.69% of income toward the costs of owning real estate.

Indianapolis, IN  rounds out our list of affordable markets, overtaking Kansas City to take fifth place. Given standard mortgage and local tax rates, a family in Indianapolis would need to spend a reasonable $811.85 per month in order to own a home.

Charlotte, NC became more affordable this April due to a decrease in real estate prices. The city dropped five places on our list to 29th, as it’s homeownership burden decreased 3.86%.

Madison, WI increased eight spots to 39th place, as median asking prices rose to $296,750 this month from $275,000 last month. The city remains a solid option for families looking to purchase a home, at an affordability index of 34.97%.

It is important to note that the dataset used to calculate this affordability index was gathered over the month prior to publication date. As the COVID-19 crisis continues to unfold, the real estate industry will undoubtedly see effects across most markets in the country. Real estate prices typically experience a lag in showing price changes, as sellers slowly start to decrease asking prices. While this current Affordability Index will not show many of the effects of COVID-19, we will be sure to monitor the situation, and highlight any of these effects in subsequent reports.