2021 Marks the Strongest Year for New Housing Construction Since 2006 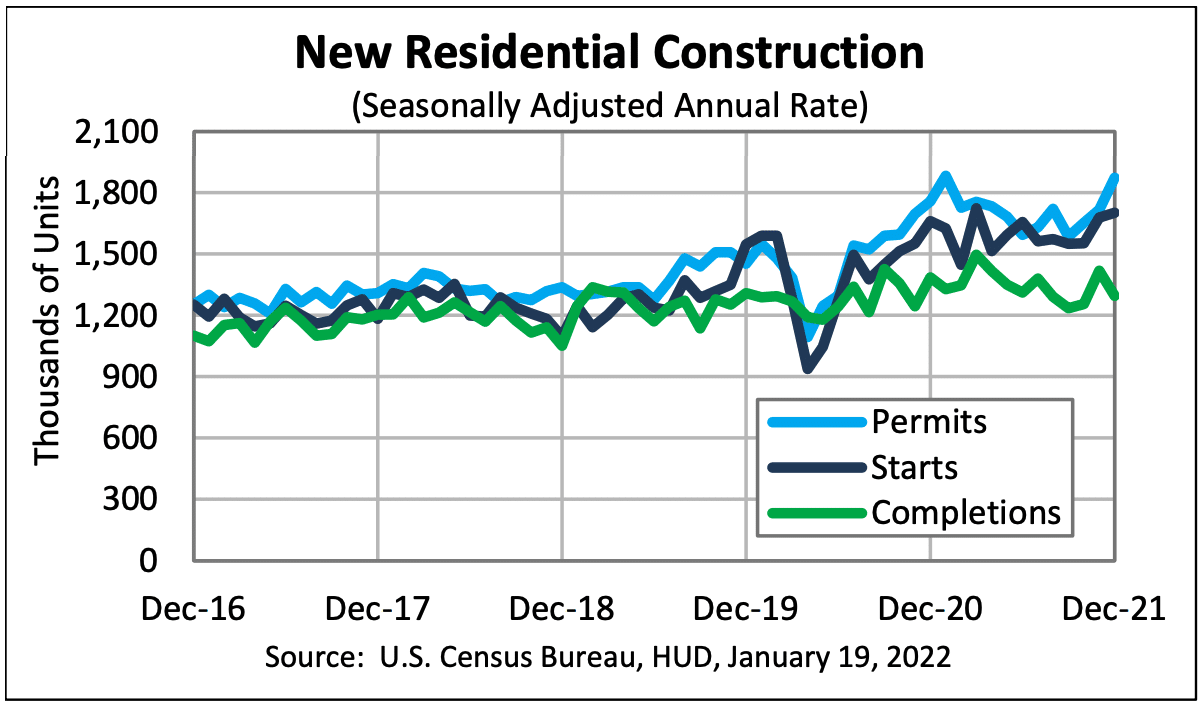 In the Northeast, building permits soared 111.9% from November to December. According to the Census Bureau, this surge was primarily due to building permits issued in Philadelphia, PA. Philadelphia enacted several real estate tax changes for residential projects permitted after December 31, 2021. Developers, therefore, flocked to get permits approved before the new changes go into effect.

Northeast saw the largest increase in 2021. The number of housing units started went up 22.2% year-over-year, many of which were multifamily constructions.

This past December, Housing starts for single-family homes were at a rate of 1,172,000, which marks a 2.3% decline compared to the revised November figure of 1,199,000. Meanwhile, the December figure for units in multifamily buildings (five units or more) was 524,000.

According to Doug Duncan, the chief economist at Fannie Mae, the new housing construction data is positive news.

“Today’s new residential construction report from the Census Bureau showed that housing activity ended 2021 on a strong note, with construction starts rising 1.4% over the month of December,” says Duncan. “For the year, total housing starts registered at 1.6 million units, the highest annual pace since 2006. Helping drive last year’s strength was the impressive resilience of multifamily starts, which recorded its highest annual total since 1987.”

As Duncan mentioned, 2021 was the strongest year for housing starts since 2006, which was the height of a significant housing boom.

When broken down by housing types, single‐family housing completions were at a rate of 990,000, 3.9% above the revised November rate of 953,000. The December rate for units in multifamily buildings (five or more units) was 299,000.

What to Expect in the Coming Months?

Housing has become increasingly unaffordable in many parts of the country. The new housing construction and completions will likely alleviate some of the supply pressure many places are experiencing, potentially reducing bidding wars. Coupled with rising interest rates, prices in key housing markets might stabilize. But keep in mind that the supply chain issue and labor shortage remain constraints.

Tyler Williams
Tyler graduated from Virginia Commonwealth University in 2017 with a Bachelor's degree in Urban and Regional Studies. Currently based in Los Angeles, he works as a freelance content writer and copywriter for companies in real estate, property management, and similar industries. Tyler's main professional passion is writing about critical issues affecting big and small cities alike, including housing affordability, homelessness, inequality, and transportation. When he isn't working, he usually plans his next road trip or explores new neighborhoods and hiking trails.

Previous articleUsing Retirement Funds as a Down Payment on a House: the Good, the Bad and the Ugly
Next articleNYC Homes Under $999K