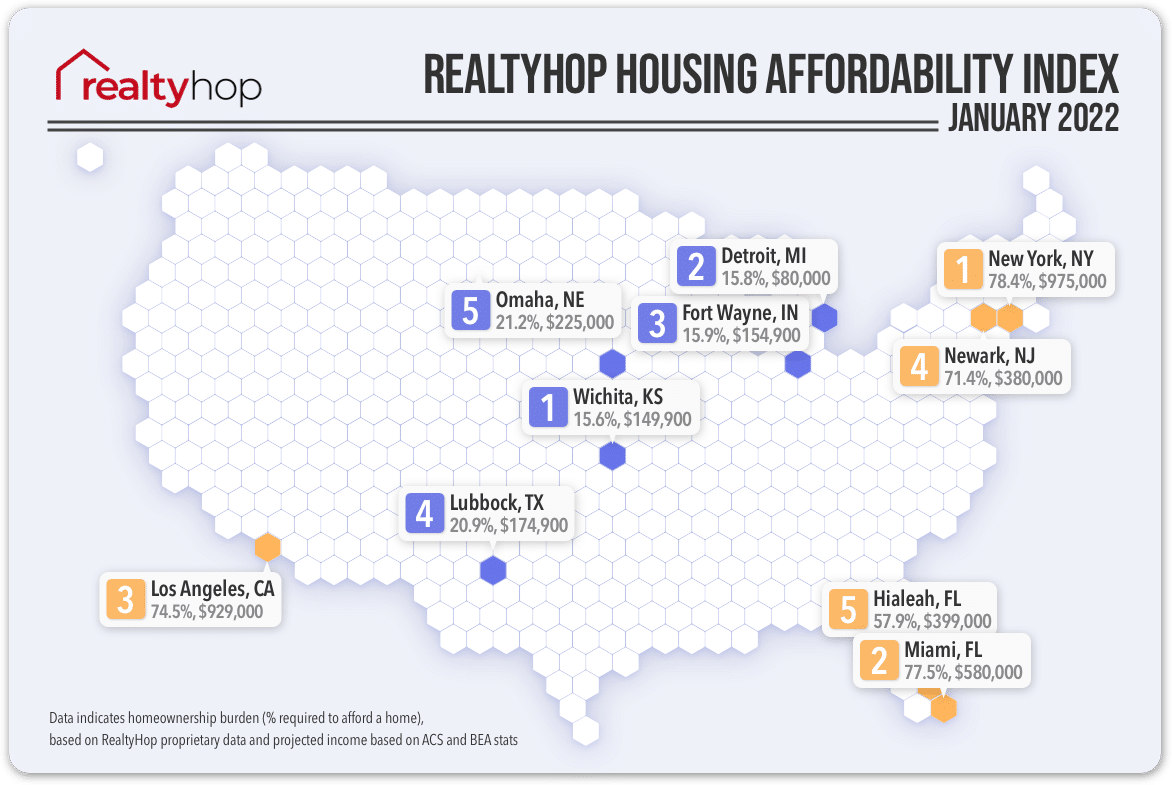 In this January installment of the RealtyHop Housing Affordability Index, we analyzed the least and most affordable housing markets in the 100 most populous cities in the United States using proprietary RealtyHop data and U.S Census data to find out:

A note about this report: we adjusted our methodology in response to the lack of income data from the Census Bureau given disruptions caused by the COVID-19 pandemic. Please see the Methodology section below for more information.

For the seventh month in a row, New York ranks as the least affordable housing market in the U.S., even as median asking prices dropped slightly to $975,000. Based on a projected median household income of $68,259, a family in New York should set aside 78.39% of their annual income toward mortgage payments and property taxes.

Miami remains the second least affordable city with a median asking price of $580,000 in December, up 3.6% from the previous month. Given median household incomes of $43,401, and an estimated monthly payment of $2,707 per month, households looking to purchase a home would need to contribute 77.51% of their annual income toward housing.

Los Angeles saw its median listing price go up slightly to $929,000 this past December, keeping its ranking as the third least affordable city in the country. An average family in L.A. would have to set aside 74.52% of their annual income to cover mortgage costs and property taxes.

Newark remains the #4 least affordable U.S. city this month, despite a slight dip in home prices this past December. The city’s median list price dropped to $380,000 in December 2021, down 2.56% from the previous month. The share of income as compared to homeownership is now at 71.39%

Hialeah rose two spots in this month’s report to became the fifth most cost burdened housing market in the country. The median asking price for a home in Hialeah currently sits at $399,000. Based on projected median household incomes of $38,976, a family looking to buy would have to spend 57.94% of their annual income on homeownership costs.

This January, Wichita remains the most affordable housing market in the U.S. Wichita’s median asking price dropped slightly to $149,900. Based on a median household income of $59,432, the percentage of income to homeownership in the city is just 15.55%.

Detroit retains its spot as the second most affordable city for homebuyers in the U.S. The median asking price remained at $80,000 this past month. With an estimated median household income of $34,492, families looking to own would need to only spend 15.77% of their annual income on housing.

For the ninth month in a row, Fort Wayne is the third most affordable housing market in the nation. With a median list price of $154,900, down 2.6% from the previous month, the homeownership cost to income ratio is currently 15.89%.

Lubbock improved two spots in our ranking and is now the fourth most affordable U.S. city. Real estate values dropped slightly this past December, with a median asking price of $174,900. Based on projected household incomes of $55,747, owners should expect to spend a reasonable 20.91% of their annual income on housing costs.

Omaha rounded out our most affordable cities this month. With a median home price of $225,000 and estimated household incomes of $60,092, a family in Omaha looking to own should allocate 21.16% of their annual income toward mortgage and tax payments.

Aurora became less affordable in January, as real estate values continued to rise; in fact, the city increased ten spots this month in our rankings. With a median asking price of $415,000, a family looking to buy in Aurora should set aside 31.16% of their annual income to cover mortgage payments and property taxes.

Birmingham jumped eight spots in our affordability rankings. With a median list price of $230,000, a Birmingham family would need to spend 30.25% of their annual income on housing — 2.54% lower than last month’s figure.

Home prices continued to slide in Philadelphia as the market cooled down from its 2021 home buying frenzy. The median asking price declined to $250,000 in December. Based on a projected median household income of $50,043 and a monthly cost of $1,214, a typical Philly family would have to allocate 29.11% of their annual income toward homeownership costs.

We wanted to outline a change to our methodology moving forward, starting with this month’s report. Due to the COVID-19 pandemic and data collection issues experienced by the 2020 ACS, no income data has been released since 2019. To ensure that our affordability index properly reflects the incomes of American households, we projected out median household incomes based on income growth statistics released by the Bureau of Economic Analysis. This provides a realistic estimate of what Americans are currently making per household.

We also updated our December 2021 income numbers with this new methodology, in order to properly compare the monthly percentage change of our homeownership-to-income ratio (seen as M/M% Homeownership in the table). This allowed us to provide an apples to apples comparison across the cities in our report.