New York City is an endless maze of skyscrapers, bridges, and bustling streets. But one of the most striking aspects of this concrete jungle is its mishmash of architectural styles that have long been tipped as some of the most exemplary in the world.

Like New Yorkers themselves, building styles in NYC come in all shapes and sizes. Technically speaking, the city’s architecture is a mix of Art Deco, Beaux-Arts, Gothic Revival, and Classical Revival styles to name a few. Respectively, these styles are characterized by the Chrysler Building, Grand Central Station, the Metropolitan Museum of Art, and the New York Public Library at Bryant Park where Carrie Bradshaw from the first “Sex and the City” film was famously stood up by Mr. Big on her wedding day.

But these buildings, though special in their own ways, aren’t what millions of New Yorkers call home.

When you ask New Yorkers what kind of properties they live in, very few will answer, “Oh, just your standard Beaux-Arts in Tudor City with factory windows,” or, “just your run-of-the-mill Gothic Revival in the Upper West with gargoyle statues carved out of the pediment.”

On the contrary, most New Yorkers will describe a walk-up building in Greenwich Village or a high-rise in Midtown. These are the places that welcome them home after a busy day in the Big Apple. And the five popular building styles below are a mere taste of what this vibrant global city has to offer its 8.5 million residents.

Manhattan’s tree-lined streets are home to some of the most expensive residential properties in the U.S. Among these pricey pieces of real estate is the historic townhouse dating back to the 1800s. Ambling down the picturesque streets of the Upper East Side, it’s easy to spot them. They come in a variety of colors, clad in brick and stone, and offer a taste of vertical living for upwards of $10,000,000 million.

Townhouses boast attractive features, many of which exude charm and are highly desired by those who can afford them. Some feature Juliet balconies that can be accessed through French doors while others are covered in ivy climbing up the brick facade. On the inside, sitting rooms are decked out with crystal chandeliers and marble fireplaces. And most townhouses feature lush backyards that offer homeowners a respite from busy urban life.

But one of the most important elements of a townhouse is its width. On average, these single-family residences are between 18 to 25 feet wide. Less than this poses a challenge for homeowners who wish to sell. When it comes to townhouses, buyers are often looking for a “trophy” home: One that’s wider than usual and has large windows for optimal light.

Narrow or wide, townhouses offer a level of privacy that’s hard to find in a city of 8.5 million residents. Unlike condos and co-ops, there are no board members involved when purchasing or selling one of these beautiful homes, which means faster transactions from contract signing to closing. 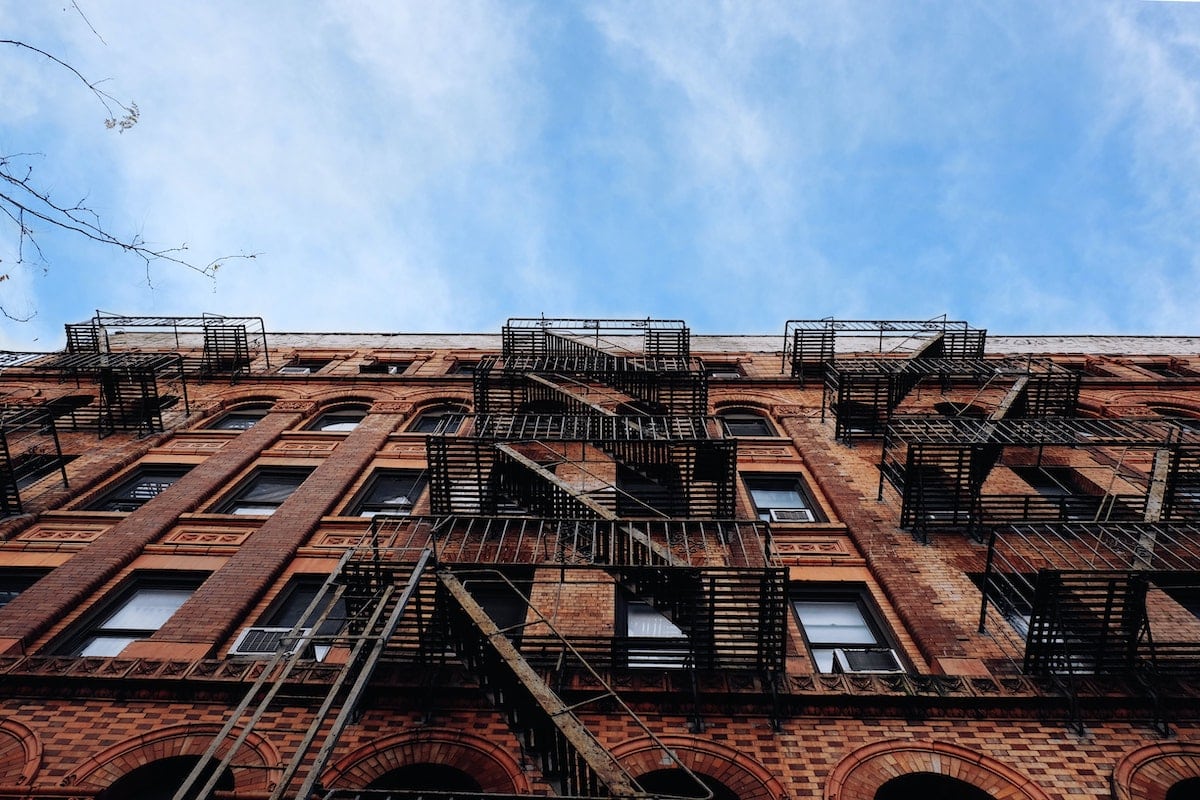 The early 1800s saw the halcyon years of brownstone quarries in Portland, Connecticut. Here, workers mined a pinkish-red stone that turned to varying shades of brown, like copper and clay, when exposed to the elements.

In 1836, Architect James Renwick Jr. designed a brownstone depot on East 30th Street to store and distribute this sand-colored stone shipped up from Connecticut. Soon enough, homebuilders in New York City preferred it over marble and limestone due to its affordability and ease of use.

The bottom line? Brownstone is a malleable natural resource that’s easy to carve. Like icing on a cake, it serves as the outermost veneer of townhouses whose interiors consist mainly of brick.

With brownstones, architects can “pipe the icing” to their liking. They can design ornate lintels above the front entrance or carve out round turrets from the facade reminiscent of castles in bucolic France.

The iconic brownstone stoop is also molded from this craftsmanship. From the Dutch word stoep, meaning “sidewalk stairs,” these steep staircases connect the sidewalk to the front door and double as informal bleachers for residents to sit and watch passersby or soak up the sun. Some brownstones have an additional set of stairs winding down to a basement apartment with horizontal windows fighting for the last rays of sunlight.

The quintessential brownstone has other noteworthy features, too, including high ceilings, narrow hallways, and spacious backyards. Rows of them can be seen while strolling down the streets of Harlem, but they’re ubiquitous across Brooklyn, especially in neighborhoods like Park Slope, Clinton Hill, and Fort Greene.

Ah, the New York City walk-up: Some of the best gyms in Manhattan can’t compete with them! To understand why, ask anyone living on the fifth floor of these elevator-less buildings, or simply glance discreetly at their rock-hard thighs.

Many walk-up apartments are located in pre-war buildings that some New Yorkers will describe as “vintage charm,” whereas others will say nothing and shrug, accepting that their dinky walk-up apartment in Greenwich Village is the best space they can afford.

For tell-tale signs of a walk-up, one must simply look at the building facade. If there are numerous storefronts flanking the front entrance, such as a dry cleaner’s, a bookstore, and a bagel shop, there’s a good chance that these brick-and-mortars are anchor tenants of your classic New York City walk-up.

Another sign (besides no elevators beyond the vestibule) is that walk-ups feature a network of wrought-iron fire escapes, often painted black, zig-zagging down from the roof to just above street level. And because most walk-up apartments don’t span the length of the property, fire escapes cascade down the rear of these buildings, too.

Now, some New Yorkers will argue that fire escapes are a sight for sore eyes. Others will beg to differ. Those in the latter group are likely to convert their drab fire escapes into makeshift balconies where planters hang from the railings and compact chairs offer a front-row experience of parades marching by in a storm of confetti.

The nomenclature of architectural structures in New York City tends to be as straightforward as New Yorkers themselves.

Brownstones are made of stone that come in different shades of brown. A townhouse is a house built in town. And walk-ups are buildings with winding staircases that sometimes feel endless.

Given this level of straightforwardness, it comes as no surprise that when describing varying heights of properties, New Yorkers are often overheard in conversation explaining the nuances of low-rise, mid-rise, and high-rise buildings to their out-of-town friends.

Simply put, low-rises rise low from the ground and are typically no taller than four or five stories. Depending on the type of property and when it was built, low-rises often get away with no elevators to transport residents up and down the multiple floors, hence the legwork required in a walk-up building.

By contrast, mid-rises are usually between five and 12 stories high. They have an elevator or two and perhaps a laundry room with either coin or card-operated machines.

To meet the growing demand for housing in New York City, mid-rises have soared above the quainter building styles that were once popular in the 1800s, namely townhouses and brownstones arranged in rows over multiple city blocks.

Some mid-rises feature bright lobbies with sitting areas for guests. Some of these lobbies are unattended while others come with part-time or full-time doormen to greet residents at the front desk.

Mid-rises line the busy streets of Midtown, Chelsea, and Flat-iron to name just a few neighborhoods, but they can also be found in the boroughs of Staten Island, Brooklyn, Queens, and The Bronx. 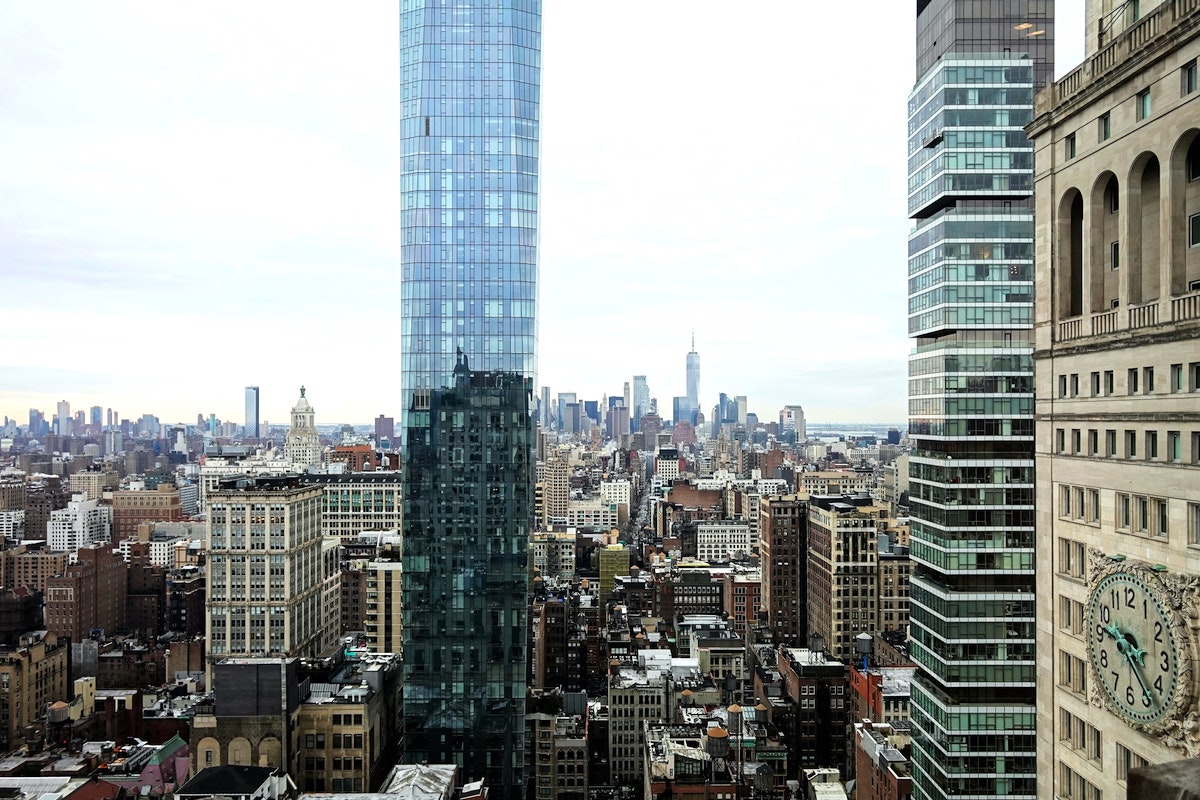 New Yorkers who live in skyscrapers that were converted from commercial properties to residential may opt for the term “high-rise” or use both interchangeably.

But in reality, a high-rise isn’t quite a skyscraper. The former rises between 13 and 40 floors on average, whereas the latter far exceeds 40 stories, with needle-like spires breaching the clouds in the sky.

Like most buildings in the Big Apple, high-rises are traditionally made of brick with newer properties showcasing double-paned windows to keep traffic noise and city chatter to a minimum.

High-rises in the waterside neighborhood of Battery Park in lower Manhattan offer larger-than-life views of Jersey City to the west and the Statue of Liberty to the south. These massive structures can easily contain over 200 apartments and provide housing for thousands of residents. As a result of this congestion, residents on higher floors may have to factor in “elevator wait times” to their morning commutes as elevator cars can get pretty busy during peak hours.

High-rises also prove that when a property in NYC gets taller, building code requirements become more intense. Consider the long list of things a high-rise building in New York City must check off to comply with building codes.

For starters, a sprinkler system (in case of a fire) is a must for any high-rises over 75 feet tall. Also, stairways must be more accessible than ever with additional doors leading out onto each floor. High winds must also be taken into consideration depending on which design the architect chooses to build. Steel, concrete, and brick, for example, will determine how much sway the building is able to withstand during strong gusts in a storm.

Sure, there are many classic architectural styles in New York City like Art-Deco and Greek Revival. But these aren’t where most New Yorkers live.

One subway station exit can be set amid gritty walk-ups with graffiti art adorning their facades, while the next station on the same line can open to a row of pretty townhouses in all the colors of the rainbow.

These aren’t just the places where New Yorkers live. These are the building styles in NYC that millions of New Yorkers call home.