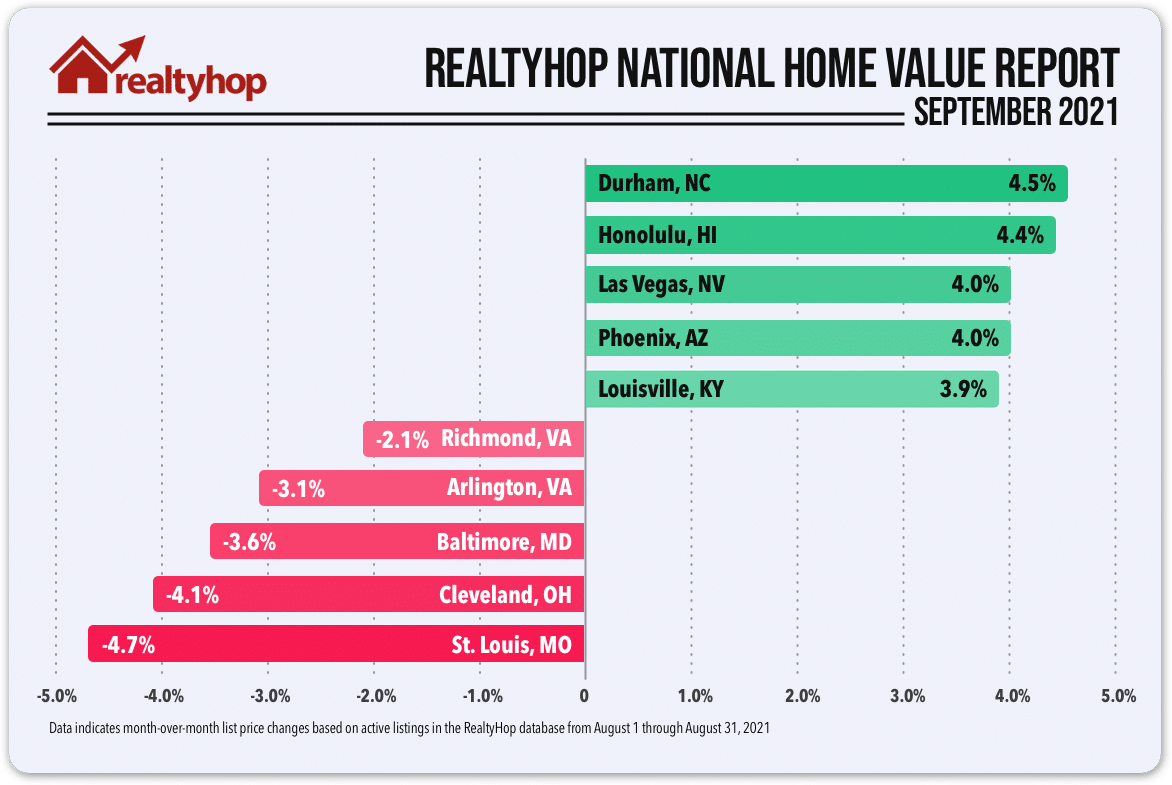 As home prices continue to rise dramatically across the nation, we at RealtyHop wanted to examine real estate conditions in each of the 100 largest cities in the U.S. The National Home Value Report examines monthly price changes for homes across the country to discover the fastest growing, and fastest cooling, markets right now. Read on to see how your city fared this month.

56 of the 100 largest cities tracked in our report saw price increases this month, as low interest rates and limited inventory continued to drive the market higher. While still positive, this represented a cooling from our last report where 70% of cities saw an appreciation.
In another sign of softening, cities that did see a rise saw lower percentage increases. For example, only 13 cities saw home prices increase 3% or more this August, compared to 21 in July.

Top 5 Cities Where Prices Went Up in August

After a drop in prices seen toward the end of last year, prices in Honolulu have steadily rebounded, and are now up 7.36% year over year. The median asking price for a home in the city is now $569,000, up 4.4% over the month.

Real estate in Phoenix continued its steep rise, as prices jumped a further 3.95% in the month. The local real estate market is now up 27.42% year over year.

Home prices in Cleveland cooled off from the considerable gains seen over the past year. Homes were down 4.09% compared to the month prior, though are still up 24.32% compared to last year.

Arlington, VA saw home prices drop 3.07% in the month to a median of $600,000. While the city has seen prices increase slightly over the year, the rise has been comparatively weak versus the rest of the nation.

Richmond, VA placed in the bottom five cities for the second month in a row, down a further 2.14% this month. Despite this recent cooling, Richmond’s market is still up 10.94% year over year.

The RealtyHop National Home Value Report examines the median asking price of homes in each of the 100 most populated U.S. cities. Median asking prices are calculated based on over 300,000 active residential listings (excluding land and mobile homes) in the RealtyHop database during the month prior to publication. The dataset provides a snapshot of current market conditions for home sellers and buyers (i.e. the market right now), and not necessarily all homes that remain off-market.