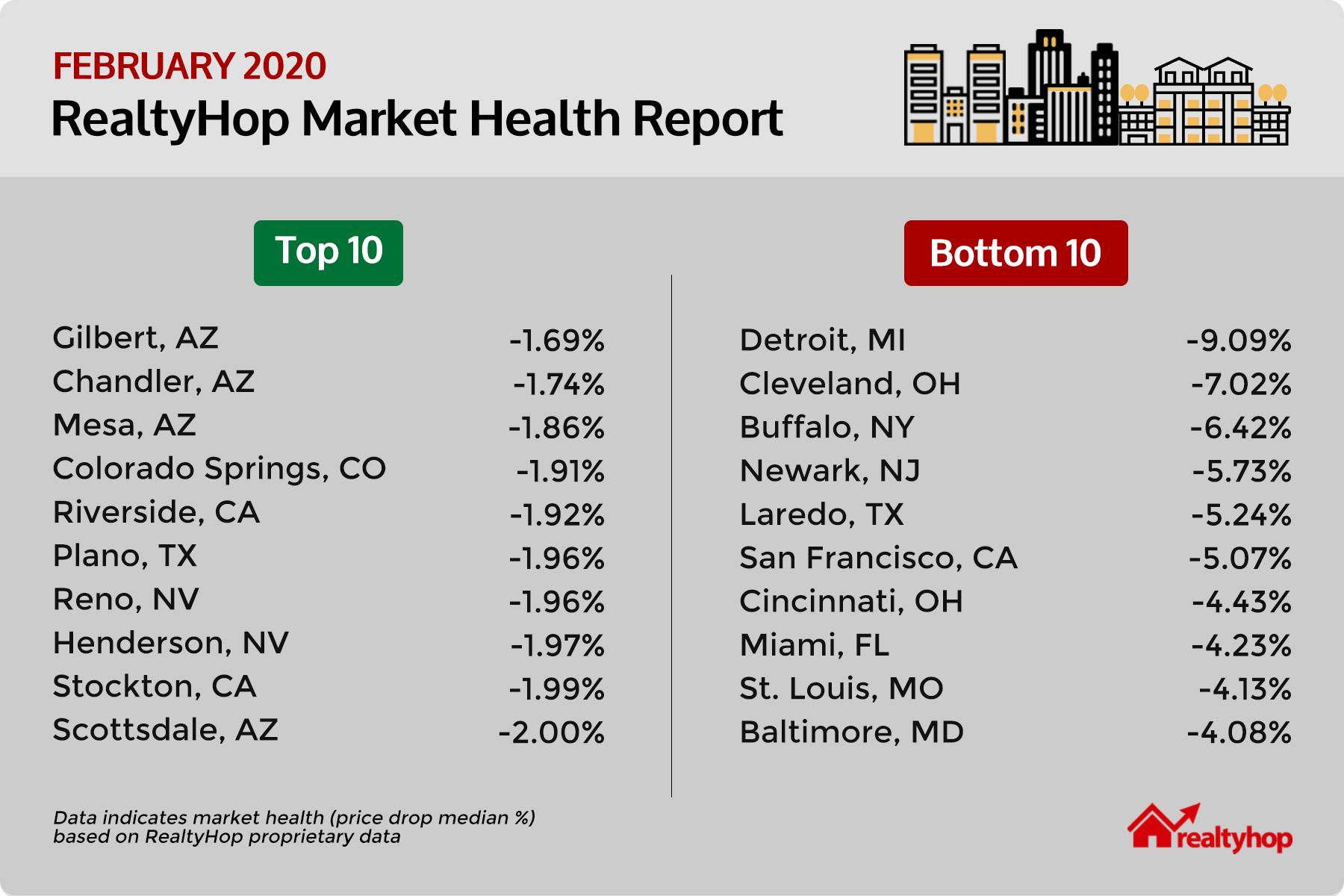 In this February edition of the RealtyHop Market Health Report, we investigate the strength of the 100 largest housing markets across the United States. To do this, we analyzed over 300,000 real estate listings on RealtyHop to calculate the “market health” of each city; specifically, the difference in price between when real estate listings are first put on the market and when they are eventually sold. In theory, stronger markets should exhibit fewer price drops and smaller percentage discounts, while weaker markets should show the opposite. Our results explore this metric and shed light on the market health of cities across the U.S. right now.

1. Gilbert, Arizona was the healthiest market in the U.S. again this February, with properties only requiring a 1.69% discount to be sold. Real estate over the month in Gilbert had a median of $425,000. The city was followed closely by two Maricopa county neighbors, Chandler and Mesa, which came in at second and third place, respectively.

2. Chandler, Arizona was the second strongest market in the country this month, as strong population growth continued to constrict housing supply. The average listing in Chandler this February required a discount of $5,700 to be taken off of the market, representing just 1.74% of the total asking price.

3. Mesa, Arizona rounded out the top three hottest markets. The city’s listings needed only a drop of $5,100 in asking price to be taken off the market, or about 1.86% of the initial asking price.

4. Colorado Springs, Colorado cracked the top five hottest markets list for the first time this February. The state of Colorado has experienced net positive migration every year for the past ten years, despite a sizable number of residents leaving the state. Colorado Springs has also become popular amongst millennials. Real estate in the city only required a 1.91% drop in asking price in order to be sold over the past month.

5. Riverside, California  increased one spot this February to break the five hottest markets for the first time. Home listings in Riverside required a $9,900 discount in order to be sold, representing only 1.92% of the total asking price.

1. Detroit, Michigan came in as the coldest housing market this past month, as supply considerably outsized demand for residential real estate. The median price change of a listing in Detroit was -$5,000, representing 9.09% of the total initial asking price.

2. Cleveland, Ohio remained stable as the second coldest housing market in the country. An average listing in Cleveland required a discount of $5,000 to be taken off the market, or about 7.02% of the total initial asking price.

3. Buffalo, New York experienced a buyer’s market this February, with listings requiring a steep 6.42% drop in order to be taken off of the market. This figure equated to a discount of $9,100 per listing.

4. Newark, New Jersey was again the fourth coldest market in the country. Real estate in Newark required a sizable $16,550 price drop per listing to be sold, or about 5.73% of total sales price.

5. Laredo, Texas made its first appearance in the five coldest markets list, as listings needed a substantial discount to be sold. The average listing required a drop of $10,250, or 5.24% of total listing price, to be sold or taken off of the market.

The RealtyHop Market Health Index analyzes proprietary data gathered from RealtyHop over the month prior to publication, providing a snapshot of housing market health across the 100 most populous cities in the United States. Price changes are taken from over 300,000 real estate listings on RealtyHop to identify each city’s “market health” based on the change in asking prices over the past month.

To calculate the index, the following datapoints are used:

1) Median home price taken from 300,000 listings on RealtyHop.com over the course of the prior month to publication

2) Median price change per listing: the median amount the asking price per listing changed prior to being sold or taken off the market