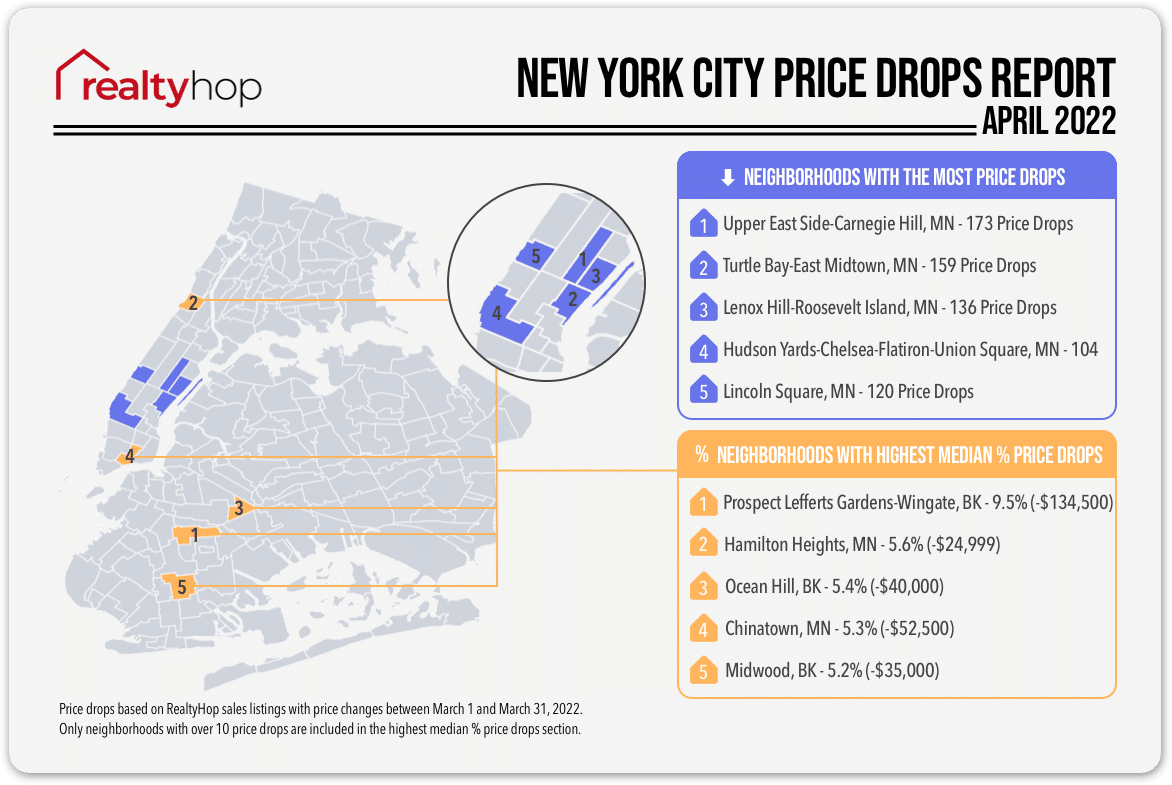 The real estate market has its ups and downs. In this April edition of the NYC price drops report, RealtyHop analyzed available data for March 2022 across boroughs and neighborhoods in New York City to provide a useful resource for those looking to invest in real estate.

Percentage-wise, Prospect Lefferts Gardens-Wingate saw the biggest price drops in March 2022, with a median percentage price drop of 9.5%, or $134,500 from the original asking price. Meanwhile, for-sale listings in Chinatown, Manhattan saw a median price drop of 5.3% or $52,500 in dollar terms. All five neighborhoods had a median price change of over 5%.

In March, the neighborhoods that experienced the highest median dollar price drops were concentrated in Manhattan and Brooklyn. SoHo-TriBeCa-Civic Center-Little Italy remains the #1, with a whopping median price drop of $165,000. But given the high real estate values in the neighborhood, that only accounts for 4.7% of the original list price. Meanwhile, homes in Carroll Gardens-Columbia Street-Red Hook saw a median price drop of $100,005, or 3.5% of the original asking price.

The table above highlights the properties with the highest percentage price drop in the past month that are still on the market. 200 West 139th Street is a nine-unit multifamily property in Central Harlem. The building recently experienced a price cut of $4.7 million, which comes out to be over 37% of the initial asking price. Unit 20B at 799 Park Avenue, a four-bedroom and four-and-half-bathroom co-op unit in the Upper East Side, was originally listed in November 2021 for $12.5 million. The asking since dropped to $9.9 million on March 19, a reduction of 20.8% from the initial price. All properties on the list experienced a price cut of 20% or above.

The table above highlights properties that saw the most drastic price cuts in dollar terms this past March. Four of the properties are townhouses or multifamily buildings for sale. 7 East 88th Street, a lavish Beaux-Arts townhouse located in Carnegie Hill, first hit the market in October 2021, asking $31.5 million. The list price was reduced by over 20%, or $6.5 million, on March 29. All properties on the list had a price drop of $2.6 million and above.

The interactive table below includes all NYC listings with price drops in the month of March. You can sort by column or do a quick search using the search bar.

With interest rates on the rise, more families in the U.S. find themselves struggling with homeownership. In this June...