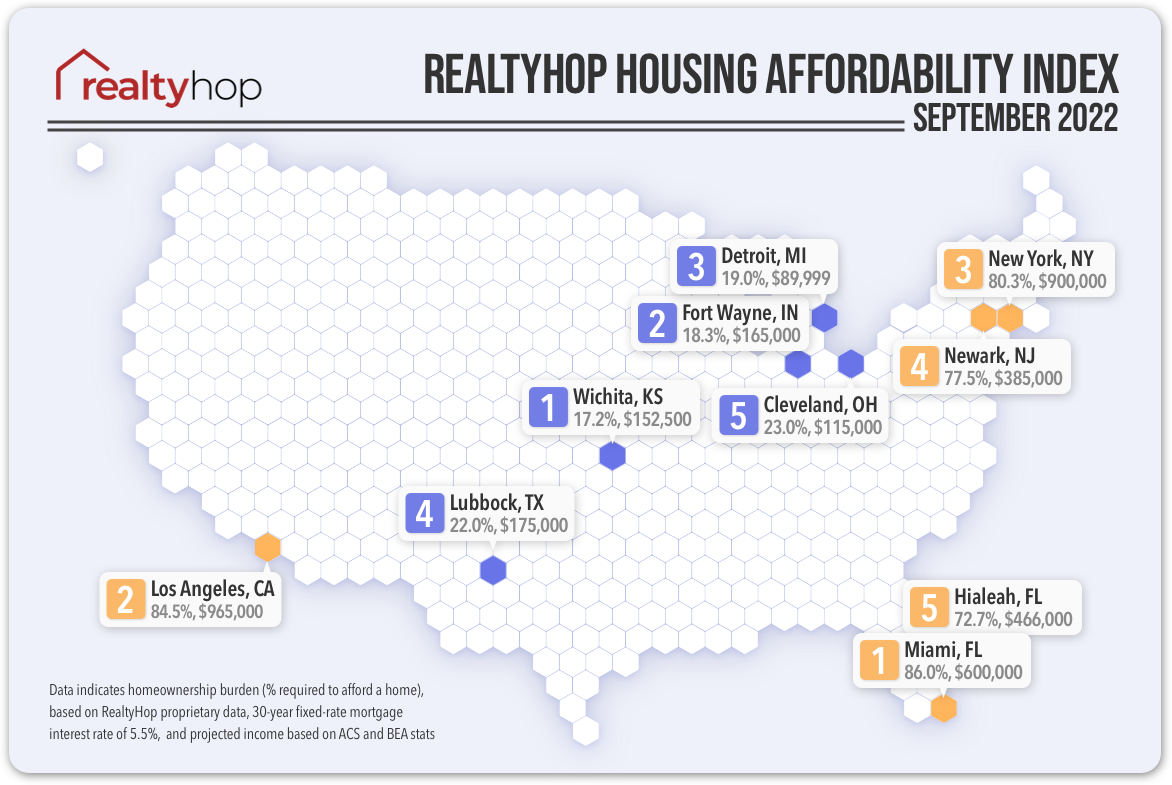 In the September edition of RealtyHop’s Housing Affordability Index, we examined the share of income U.S. households would have to spend on homeownership costs to find out:

This month, 63% of the cities in the index experienced drops in asking prices, including Miami, Los Angeles, New York, Boston, Austin, and Sacramento, signaling the start of a housing recession accompanied by decreased sales and housing starts.

With an overheated housing market, interest rates above 5%, and the highest inflation since 1981, buyers struggle to find homes within their budget. As more and more prospective buyers pause on buying, sellers are forced to lower their expectations and adjust to a market that’s finally cooling down after two record-breaking years.

Despite a slight price correction, Miami continues to rank the least affordable housing market across the nation. The median home price slid from $610,000 to $600,000, 1.64% lower than in August. Based on the projected median household income of $44,581 and a 5.5% interest rate on a 30-year fixed-rate mortgage, typical families looking to own in Miami would need to allocate 85.96% of their annual income toward homeownership costs.

Los Angeles remains the second least affordable U.S. city this September. The median home price dipped slightly to $965,000. With a 5.5% mortgage interest rate, an average L.A. family has to put 84.46% of their annual household income toward mortgage payments and property taxes.

While New York City maintained the title of the third least affordable city in the U.S., the median list price dropped to $900,000. This is the third month where median home prices decreased month-over-month in New York. With a projected median income of $68,129, an average household in New York would have to allocate 80.24 % of their annual income to own a property. This number is 2.70% lower than in August.

Newark is the fourth least affordable U.S. housing market. The median asking price remains stable at $385,000. A typical Newark family making a projected median income of $38,854 should expect to spend 77.52% of their annual household income on homeownership costs, including mortgage repayments and real estate taxes.

Hialeah rounded out the top 5 least affordable housing markets this September. The median home price rose marginally to $466,000 since last month. With a projected median household income of $40,036 and an interest rate of 5.5% on a 30-year fixed-rate mortgage, a local Hialeah family will have to allocate 72.71% of their annual income on homeownership costs.

Wichita replaced Fort Wayne and became the most affordable city in the nation this September. The median home value of residential homes for sale dropped from $160,000 in August to $152,500 this month. With a 5.5% 30-year fixed-rate mortgage, a local Wichita family should set aside 17.2% of their annual income to afford a home.

Fort Wayne slid one spot and became the second most affordable U.S. housing market. The median list value rose for the second month, from $160,000 to $165,000 this September. This means a typical family in Fort Wayne would need to spend 18.3% of their annual income on homeownership costs.

Detroit ranks the third most affordable U.S. housing market. The median asking price remains stable at $89,999 this September. Average Detroit families looking to own a home should expect to put 19.03% of their annual income toward mortgage payments and property taxes. The homeownership burden remains unchanged from the previous month.

Lubbock remains the fourth most affordable U.S. city this September. Real estate values rose slightly to a median of $175,000. Based on a 5.5% mortgage interest rate on a 30-year fixed-rate loan, prospective buyers in Lubbock should be prepared to spend $1,058 per month on mortgage payments and taxes. This translates to 22% of the median household income.

Cleveland closed out our index this month as the nation’s fifth most affordable housing market. The median home value rose to $115,000 this September. An average Cleveland family can expect to allocate 22.96% of their annual income to owning costs. The homeownership burden is 2.22% higher than in August.

Good news for families in Sacramento – after solid growth in the past few years, the housing market in Sacramento is finally cooling down. The city currently ranks the 35th least affordable housing market across the U.S., seven spots lower than in August as the median asking price dropped to $465,000. After factoring in a mortgage interest rate of 5.5% and median household income of $69,912, a family looking to own in Sacramento will need to contribute 41.8% of their annual income toward owning costs, down 4.12% from a month ago.

Homes became more affordable in Washington D.C. The city is now the nation’s 32nd least affordable housing market, moving six spots on our affordability index. The median list price currently sits at $650,000. With a 5.% mortgage and local real estate tax rates, average families in D.C. should expect to set aside 42.20% of their annual income for homeownership costs.

Birmingham became more affordable this September. The city currently ranks the 39th most affordable housing market in the U.S, improving six spots from the previous month. The median home price dropped from to $240,000 this month. Based on a 5.5% mortgage rate, homebuyers in Birmingham can expect to spend $1,194 on mortgage repayments and property taxes. This equals 34.19% of their annual income, 4% lower than in August.

In this February edition of the RealtyHop Housing Affordability Index, we examine what American households across the 100 largest...
Market Trends & Research

In this January edition of the RealtyHop Housing Affordability Index, we examine what American households across the 100 largest...

Last Updated on 5 months by Faye