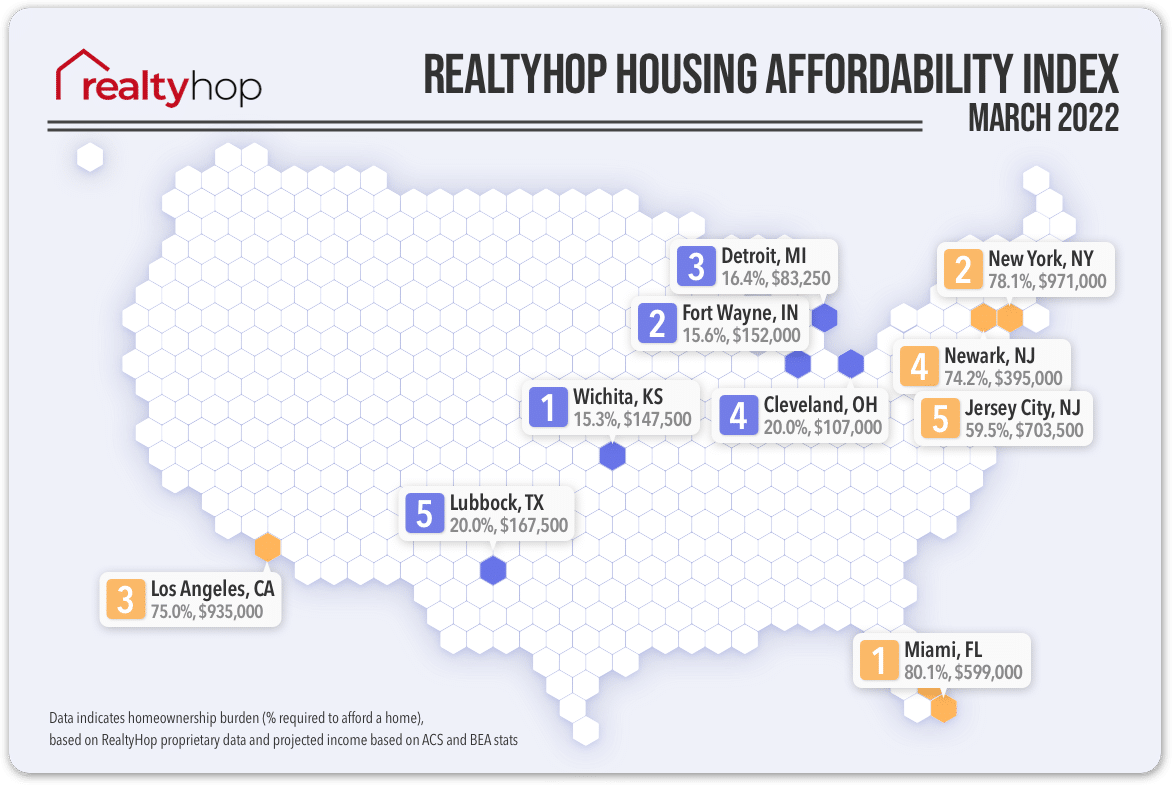 Housing has become increasingly unaffordable in the United States. In this March installment of RealtyHop’s Housing Affordability Index, we examined the share of homeownership cost to income to find out:

This month, 80 out of the 100 cities in our index became less affordable. Miami is still holding strong and remains the least affordable city across the nation. Meanwhile, Wichita, Fort Wayne, and Detroit continue to be some of the most affordable housing markets for American households to purchase a home.

For the second month in a row, Miami is the least affordable housing market in the U.S. The pandemic-induced migration has brought more people from cities like New York and San Francisco. Demand from investors and homebuyers alike is driving up home prices, making it harder for locals making median to low income to purchase a home.

Based on the projected median household income of $43,401 and a median list price of $599,000, an average Miami family would have to set aside 80.05% of their annual income for mortgage payments and property taxes. This number is 1.07% higher than the previous month.

New York City continues to be one of the least affordable cities across the nation. This month, the median asking price went up slightly to $971,000. A family making median income in New York can expect to spend 78.07% of their annual income on homeownership costs.

Los Angeles remains the third least affordable U.S. city this March. With a median asking price of $935,000 and projected median household income of $68,733, a typical family in L.A. can expect to contribute 75% of their annual income toward monthly mortgage payments and property taxes, up 1.08% from the previous month.

Newark is once again the fourth least affordable housing market in the country. Home prices have grown significantly in the past year, driven by investors and people looking for lower-priced housing from neighboring cities. This makes housing less and less affordable for local Newark residents.

A Newark family making median income will have to allocate 74.21% of their annual income to homeownership costs, or $2,382 per month. The share of income for homeownership is 2.60% higher than last month.

Jersey City rounded up our five most unaffordable cities this March. With a median list price of $703,500, a typical family in Jersey City should be ready to contribute 59.47% of their annual income to mortgage repayments and property taxes in order to maintain homeownership.

This March, Wichita remains the most affordable housing market in the country, even though the home prices have gone up slightly, by 1.72%. Given a projected median household income of $59,432 and median list price of $147,500, a family looking to own in Wichita should set aside 15.3% of their annual income toward homeownership.

Fort Wayne once again ranks the second most affordable U.S. city this month. A typical family in the city can expect to spend 15.59% of their annual income to afford a home after factoring in mortgage and property taxes.

Detroit continues to be one of the most affordable cities in the country. The city ranks the third in our affordability rankings this month, with a median asking price of $83,250. A family making median household income in Detroit should budget 16.41% of their annual income for monthly mortgage payments and property taxes, which comes out to around $472 per month.

Affordability improved slightly in Cleveland this month. With a projected median household income of $34,550 and median home price of $107,000, a typical Cleveland family will have to allocate 20.02% of their annual income toward homeownership. This number is 2.64% lower than in February.

While many cities in Texas have seen significant appreciations in the past couple of years, some cities remain affordable. Lubbock ranks the fifth most affordable U.S. housing market this March, with a median asking price of $167,500. A typical Lubbock family looking to purchase a home should be prepared to spend 20.03% of their annual income on mortgage and property taxes.

Seattle has long been one of the most expensive cities in America. This month, housing affordability worsened in the city. With a projected median income of $104,929 and a median list price of $720,000, a typical family in Seattle will need to contribute 38.57% of their annual income to homeownership costs, up 6.04% from the previous month.

Pittsburgh became more affordable this month. The median asking price dropped 6.41% to $202,500, and for a family looking to own, that means around $1,050 per month to cover mortgage payments and property taxes, or 23.73% of their annual income.