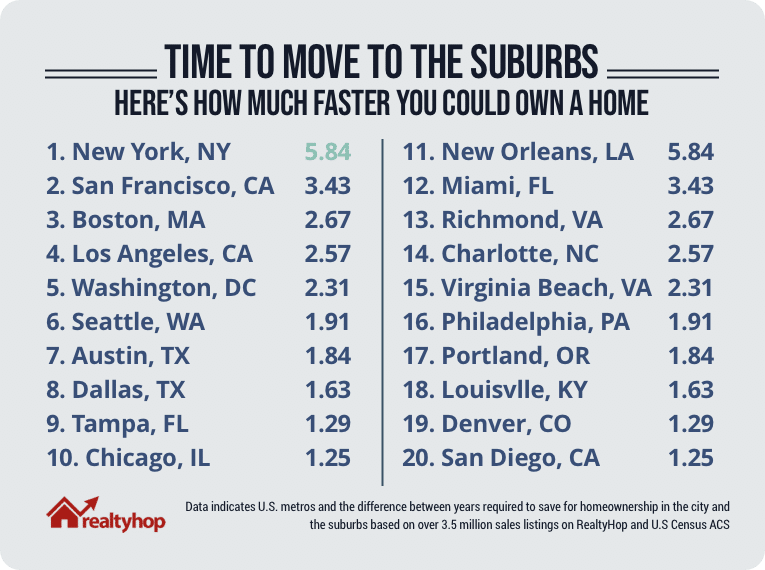 Corporate America had long been defined by physical offices. That changed within days after COVID-19 hit the nation. The new norm now involves waking up and working at the same place you call home and having a “Zoom shirt” ready to go for any video conferences. The suburban life without the horrible commute to and from the city every day seems more appealing than ever to workers with the option to work from home.

To better understand homeownership during and post-pandemic and provide buying insights, we at RealtyHop took a look at how potential homebuyers could accelerate their home buying process by moving to the suburbs.

Potential homebuyers in New York could accelerate buying by 5.84 years if they relocate to the suburbs. With a median city household income of $69,407, it only takes on average 6.97 years for a family to afford a home in the suburbs, compared to 12.81 years in New York City. Of course, not all suburbs are the same. For families making city income to move to Harrison, one of the most expensive Westchester suburbs, it would take shockingly 17.29 years to save up for a 20% down payment.

Residents in the Bay area are no stranger to horrible traffic starting at 3 pm and crowded BART train cars. Due to the high real estate prices in San Francisco, it’s a norm for people working in the city to commute daily from the suburbs. On average, it’s 3.43 years faster for a family making a median city income of $123,859 to own a property in the suburbs.

While the Boston condo market has been hit hard by the pandemic, the city remains one of the most competitive housing markets in the U.S. Potential homebuyers could accelerate their buying process by 2.67 years by moving to the suburbs. Of course, some suburban markets are more popular than in the city. Homeownership is less achievable in certain suburban markets, such as Newton (15.81 years) and Somerville (11.71 years).

Los Angeles is often considered the least affordable city in the U.S. With a median price of $929,500 and a median household income of $67,418, it takes 13.79 years for a family to afford a home in the city. Homeownership, fortunately, is slightly more attainable in the suburbs. On average, it takes 11.22 years in the suburbs, 2.57 years faster, for homebuyers making median city income to own.

With a median asking price of $649,000, it takes a family making median household income 7.03 years to afford a home in Washington D.C. This number, however, drops to an average of 4.72 in the D.C. suburbs. In Silver Spring, a highly rated D.C. suburb located in Maryland, it takes 4.5 years for a household making city income to afford the 20% down payment.

With a median asking price of $709,000, it takes a family making median household income 6.92 years to afford a home in Seattle, WA. This number, however, drops to a weighted average of 5.01 in the suburbs. By moving to Tacoma, a family looking to buy could speed up their process by 3.26 years.

Austin has been one of the fastest-growing U.S. cities thanks to the friendly tax incentives as well as diverse cultures, and the housing prices have been steadily growing in the past few years. With a median city income of $75,413, it takes 5.97 years to save up for a down payment on a home in the city of Austin. By moving to the suburbs, potential homeowners can accelerate the buying process by 1.84 years.

As more as more companies expanding and relocating to Dallas, it is now one of the hottest housing markets in the U.S. Despite the booming economy and population growth, Dallas remains relatively affordable compared to other major U.S. cities. A family making a median city income of $55,332 would have to save 20% of their income for 7.21 years to afford a home. The process of saving for a home is 1.63 years faster in the suburbs assuming the same income level.

With a median asking price of $320,000, it takes a family making median household income 5.55 years to afford a home in Tampa, FL. This number is reduced by 1.29 to 4.26 years in the suburbs. By moving to Tacoma, a family looking to buy could speed up their process by 3.26 years.

With a median asking price of $349,000 and median household income of $61,811, it takes a family 5.65 years to afford a home in Chicago, and on average, it’s 1.25 years faster to enter homeownership in the Chicago suburbs. Some suburban housing markets, however, are hotter than the city market. With a median asking price of $529,900, it takes 8.57 years for a family making city income to afford a home in Glenview, 2.93 years more than in the city.

Homeownership – City vs. Suburbs by the Top 50 U.S. Metros 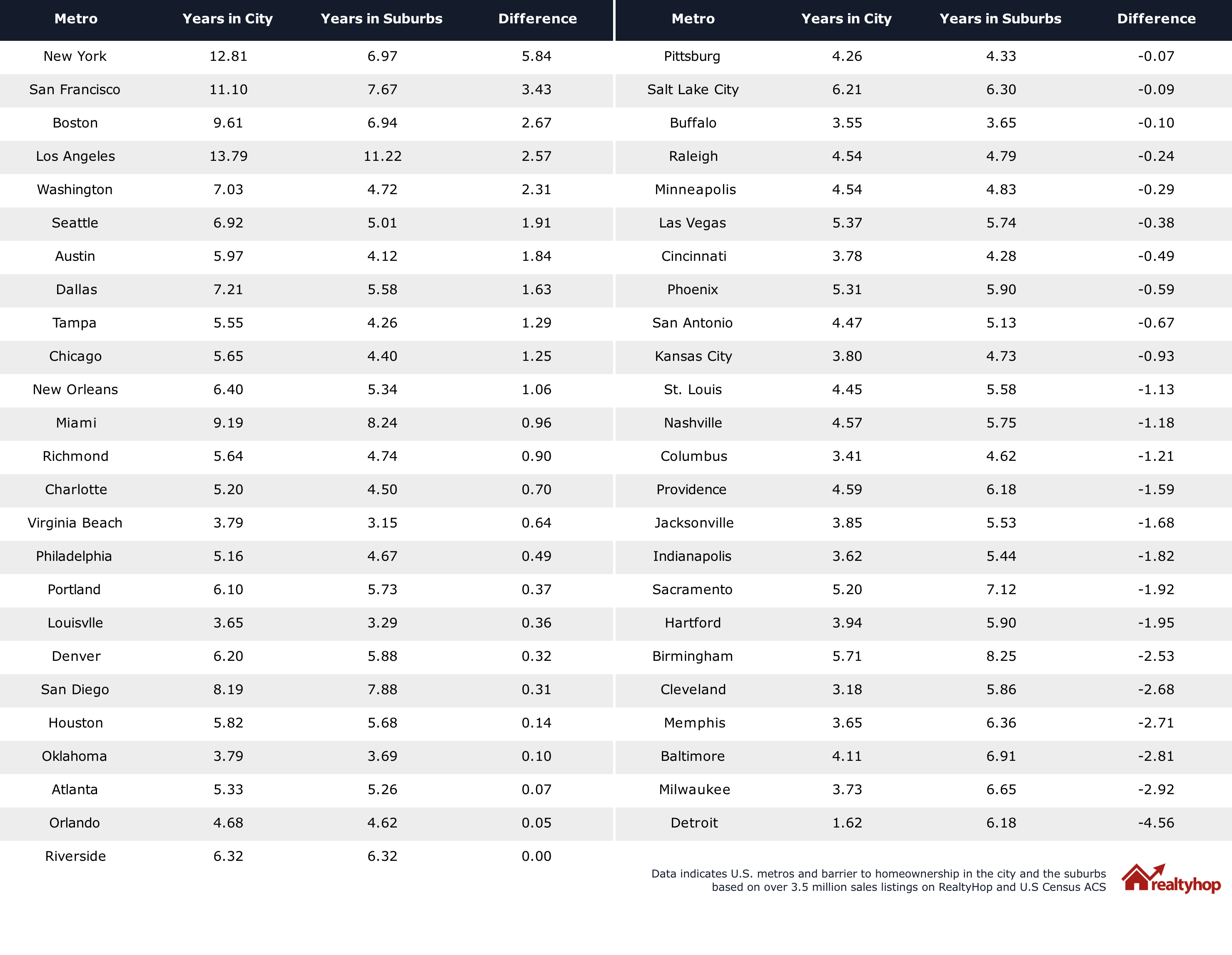 The interactive table below summarizes all the principal cities as well as suburban cities included in this study. You can sort the data by price or other columns or look for your city by typing in the search bar.

This report examines how the barrier to homeownership differs among principal cities and suburbs across the top 50 U.S. metros by population. By definition, a principal city is the largest city within a metropolitan area. All non-principal cities located within the metro boundaries are considered suburbs. Note that due to the proximity, the San Jose metro area was combined with the San Francisco metro. We calculated the median asking prices using over 3.5 million residential sales listings on RealtyHop between January 1, 2020, and December 31, 2020.  To limit the scope of this study and better reflect the prices U.S. households expect to see when buying, the following property types were included when calculating the median: condo, co-op, single-family house, house, and townhouse. Any listings classified as “land” are excluded from this study.