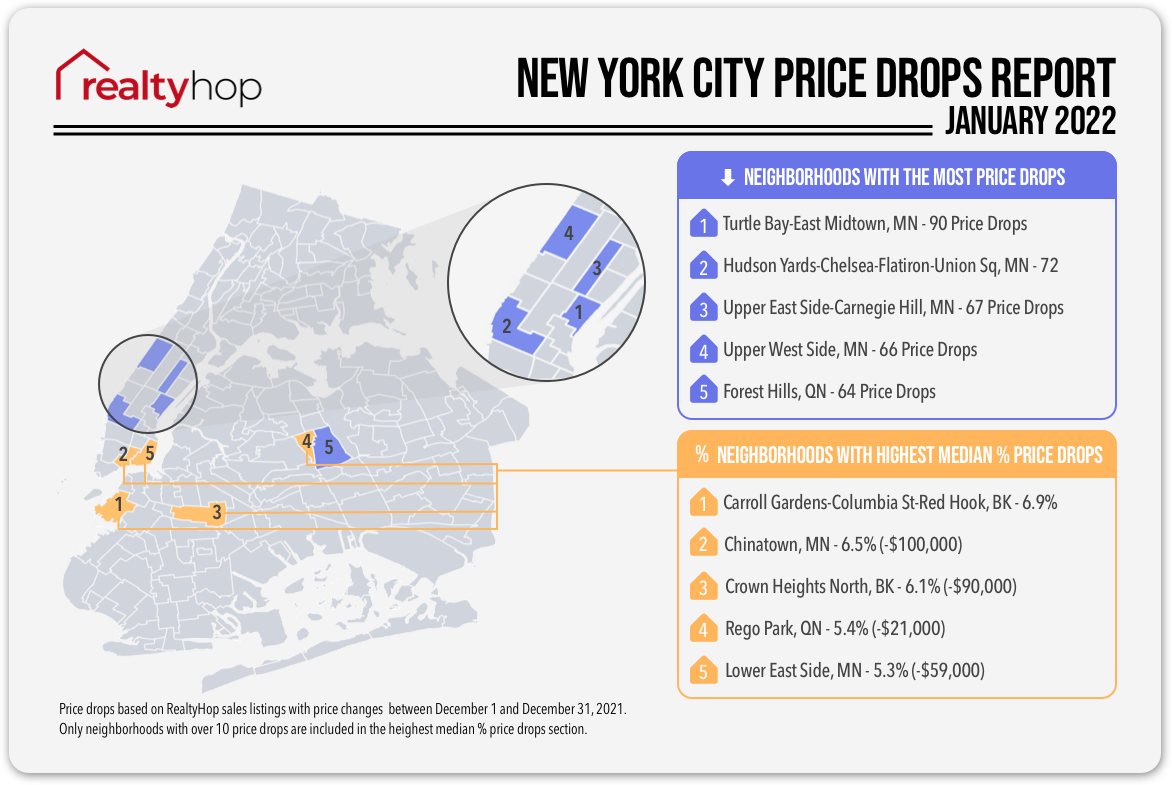 The real estate market has its ups and downs. In this January’s NYC price drops report, RealtyHop analyzed available data for December 2021 across boroughs and neighborhoods in New York City to provide a useful resource for those looking to invest in real estate.

In December, four of the five neighborhoods that experienced the highest median price drop in dollar amount are located in Manhattan. SoHo-TriBeCa-Civic Center-Little Italy reclaimed the throne as the #1 neighborhood, with a median price drop of $192,500. However, because of the high real estate values in the area, that only accounts for 4.0% of the original listing price. West Village came in as the neighborhood with the third-highest median dollar price drop, with a median of $120,000, or a 4.4% discount from the asking price.

The table above highlights the properties with the highest percentage price drop in the past month that are still on the market. 9115 Bedell Lane, a multifamily property in Canarsie, Brooklyn had a whopping price cut of 51.3% or $2.05 million on December 24. Meanwhile, the townhouse located at 17 West 9th Street experienced a price decrease of 22.3%, or $4 million. All properties on the list experienced a price cut of or above 22%.

The table above highlights residential properties that saw the most drastic price cuts in dollar terms this past December. 88 Remsen Street, a beautiful townhouse located in Brooklyn, first hit the market in September with a price tag of $20 million. The asking price was first reduced to $17.8 million in October, and again to $15 million on December 8th. Another property worth noting this month is the newly renovated 80 West Washington Place. It is considered a Greenwich Village trophy and was recently featured in Architectural Digest and Home Beautiful. The six-bedroom, eight-bathroom property comes with a wine cellar, glass elevator, and exposed brick walls. It’s currently asking just under $25 million, after a price reduction of $1.5 million, or 5.7% of its original list price.

The interactive table below includes all NYC listings with price drops in the month of December. You can sort by column or do a quick search using the search bar.