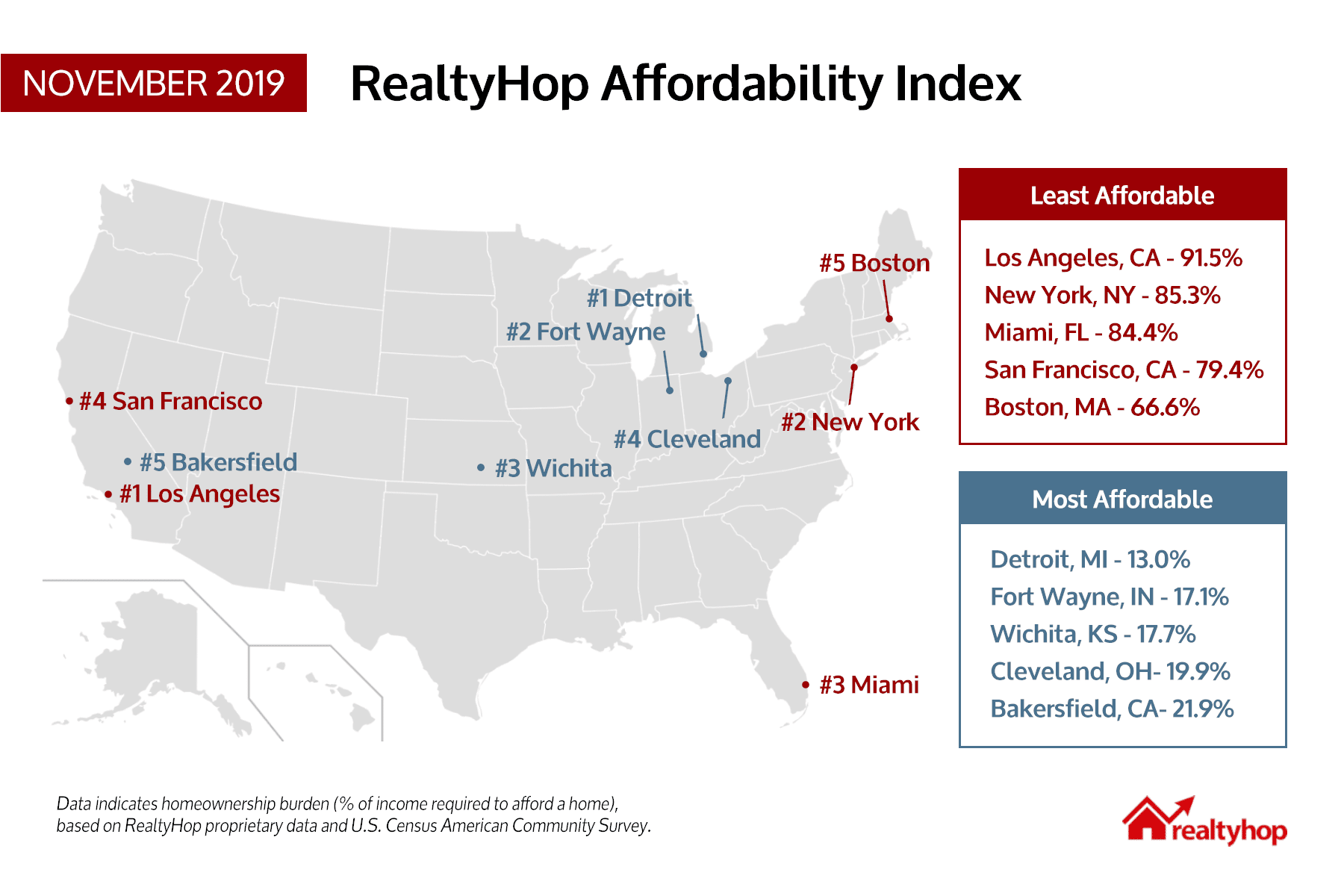 In this November installment of the RealtyHop Housing Affordability Index, we investigate the decision to purchase a home in the 100 most populous cities across America. Is homeownership affordable or even possible for the average family in each city? Every month we analyze proprietary RealtyHop data alongside comprehensive U.S. Census data to find out. See how your city fares in affordability.

1. Los Angeles, CA remained the least affordable city for homeowners this November, requiring the median household to allocate 91.5% of yearly income towards owning a home. This equates to over $4,155 per month in mortgage and tax costs.

2. New York, NY experienced a slight drop in homeownership burden due to a dip in home sales prices. Despite this, the city remained ahead of Miami for the second month in a row. Given standard mortgage and local tax rates, average NYC households should expect to pay $4,107 per month, or 85.3% of annual income, in order to own their own place.

3. Miami, FL saw home prices remain stable this November at $489,900 for the average for-sale listing. Given median household income of $33,999, the average family should however expect to allocate a staggering 84.4% of annual income if they would like to own their residence.

4. San Francisco, CA was the fourth most cost burdened city for homeowners this November. Despite high median annual household incomes of $96,265, home prices remained stable at $1.398 million, requiring households to allocate 79.4% of annual income to afford a home in the city.

5. Boston, MA remained in our top five for the third month in a row, experiencing a 1.37% rise in our index due to a hike in home prices. Given standard mortgage and local tax rates, the average household should expect to allocate 66.6% of annual income toward the costs of owning a home.

1. Detroit, MI was again the most affordable city for homeowners this November, as prices remained constant through the period. A household on average only needs to spend 13% of total annual income to own a home; considerably cheaper than the next most affordable market, Fort Wayne, IN at 17%.

2. Fort Wayne, IN retook the second most affordable spot, leaping Wichita, which briefly became even less expensive last month. Given a median household income of $45,853, and home listing prices of $134,900, residents should expect to allocate only 17% of income to own a home in the city.

3. Wichita, KS dropped one spot to the third most affordable city in the U.S. due to an increase in home prices. The city still remains a great option for those looking to purchase a home.

4. Cleveland, OH held fourth place this November, as home prices remained flat over the month. Given local mortgage and tax rates, the average household only needs to spend $460.93 per month, or 19.9% of annual household income, to own a home.

5. Bakersfield, CA rounds out our most affordable list, despite a 3.5% increase in its homeownership burden index this month. Resident households in the city only need to allocate 21.9% of annual income in order to own the average property.