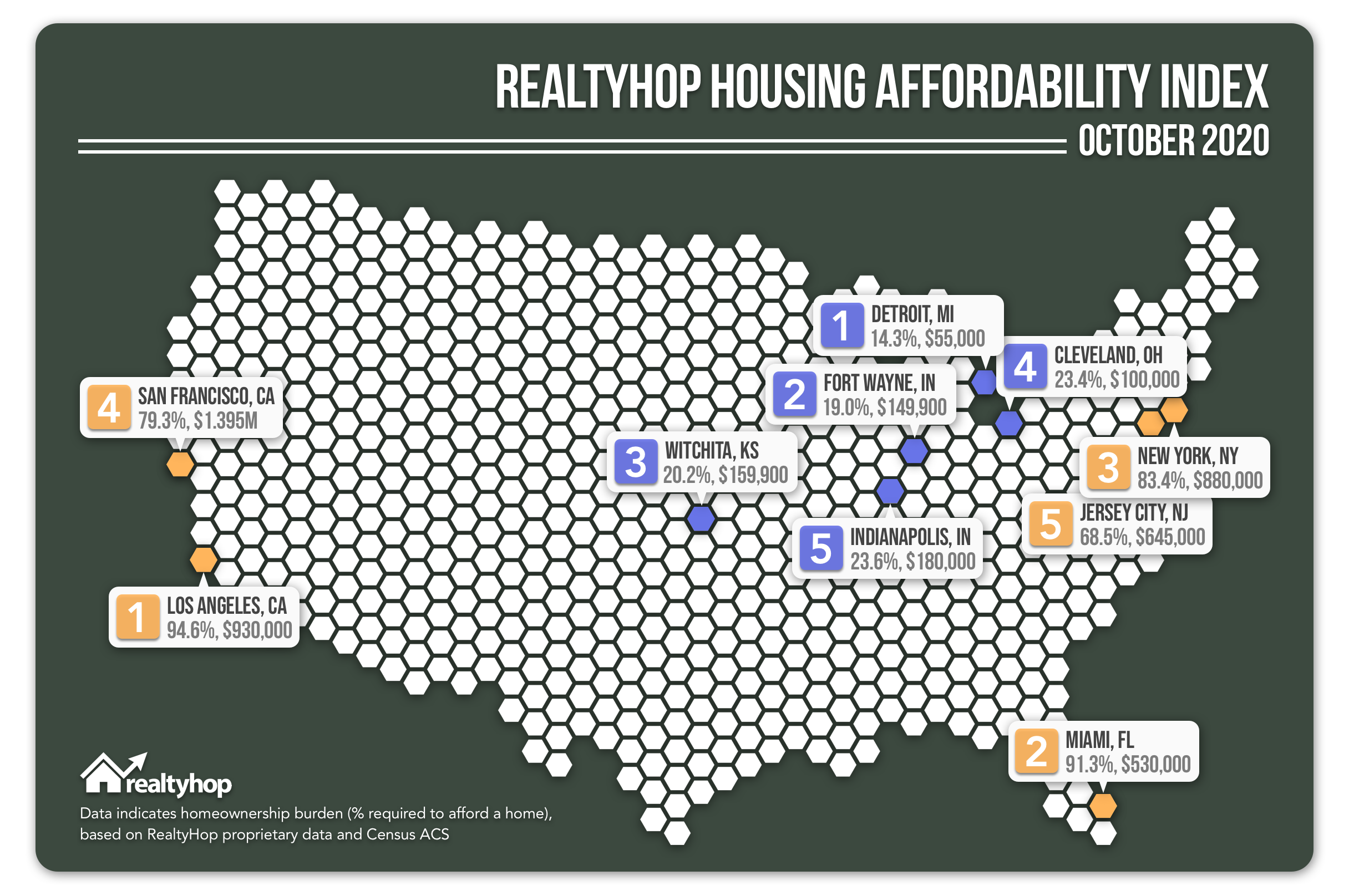 Los Angeles, CA  was the least affordable market for homebuyers this October, as the city experienced a jump in its already high affordability index. The change was led by home prices rising from a median of $927,500 to $930,000. Given local taxes, and median household incomes, a family in LA would need to spend 94.55% of their annual income on homeownership costs.

Miami, FL  remained the second most expensive homeownership market, as the city’s index increased 1.92% over the period. A resident household in Miami would need to pay $2,585 per month toward homeownership costs, equating to 91.26% of total household income.

San Francisco, CA  was again the fourth least affordable market in the country, despite a drop in real estate prices from $1.45M to $1.395M. While rents, and subsequently sale prices, have both decreased, the average family in SF would still need to spend $6,359 per month, or 79.27% of income, in order to own a home in the city.

Jersey, NJ  increased one spot to take the fifth least affordable spot this October. Given median household income of $62,739, home prices of $645,000, as well as local taxes and mortgage costs, the average family should expect to allocate 68.51% of annual income toward homeownership costs.

Detroit, MI  was stable as the most affordable market in the U.S., as median home prices remained flat at $55,000. An average Detroit family would only need to spend $332.66 per month in order to own a home, representing just 14.34% of household income.

Fort Wayne, IN  was the second most affordable housing market this October, driven by well-priced housing and strong household incomes. A family looking to buy in Fort Wayne would only need to spend $725 per month on mortgage and tax costs, equating to a low 18.96% of annual income.

Witchita, KS  was again the third most affordable market, despite a rise in median home prices from $152,500 to $159,900 over the period. A family in Wichita should expect to allocate 20.17% toward homeownership costs, 4.85% higher than last month’s statistic.

Cleveland, OH  became slightly more affordable in the month, moving up one spot on our most affordable list to take fourth place. Given household incomes of $27,854, median home prices of $100,000, as well as local mortgage and tax rates, a family in Cleveland would only need to spend $543 per month in order to own a home.

Indianapolis, IN  jumped two spots on our affordable list this month, led by a decrease in median home prices from $184,900 to $180,000. Given strong household incomes of $44,709, as well as mortgage and local tax rates, a family in Indianapolis should only expect to allocate a reasonable 23.59% of income toward housing costs.

Seattle increased five spots to 16th place, as the city experienced a hike in home prices to $699,997. A family in Seattle should expect, on average, to spend 49.62% of income toward the costs of owning a home.

Tulsa jumped nine spots to 49th place, as its homeownership index increased 7.72% in the month. Given household income of $44,577, as well as local tax and mortgage rates, a Tulsa family would need to spend only $1,253 per month on housing costs.

Arlington, VA dropped eleven spots in our ranking to 54th place, as the city became increasingly affordable. Median asking prices for a home in Arlington fell to $650,000 from $699,900 last month.