While inflation is not a new economic concept, it’s becoming an increasingly hot topic as the U.S. faces historically high inflation triggered by supply chain issues and the economic recovery from the pandemic-induced recession.

If you’re worried about the effect of inflation on your investment portfolio or the amount of cash you hold, real estate might be your saving grace.

Inflation, by definition, is a loss of purchasing power over time. A dollar today will not buy the same value of goods tomorrow. Inflation is measured by two main indices, Consumer Price Index (CPI) and Personal Consumption Expenditures Index (PCE). In our article, when we refer to inflation, we will be measuring the CPI.

According to RealtyHop’s 2021 Year in Review, home prices increased 14% nationwide in 2021, more than doubling the 6.8% rise in inflation during the same period.

Why do real estate values rise faster than inflation?

There are a few main reasons why home values rise faster than inflation.

Demand for housing doesn’t go away

Even in times of economic crisis, demand for housing doesn’t go away, as housing is a basic human necessity.

Real estate is a tangible asset

Tangible assets like real estate gain more value over time, and land is a finite resource.

Referencing the chart above, real estate values started to rise much faster than inflation around the turn of the century. A June 2021 study from the National Association of Realtors explains that housing production declined around 2000, relative to previous years. Because of this shortage, homes started to increase faster than inflation. Here are some highlights from their report:

Why is real estate a good hedge against inflation?

After purchasing a home, your mortgage will stay the same even as inflation increases, assuming it is fixed-rate. For example, let’s say you bought a house for $400,000 in 2011. Your mortgage payments will remain the same, even though $400,000 in 2011 is equivalent to $494,000 in 2021, adjusted for inflation. In effect, you are paying a nearly 20% discount on your property due to locking in your mortgage at a time when the dollar was worth more.

As home prices and inflation rise, so do the costs of owning a rental property, including higher property taxes and inflated costs for maintenance and repairs. Luckily, rental income typically rises faster than inflation, meaning property owners are more than able to offset the rising costs associated with their rental property. According to CoreLogic, single-family rents increased 10.2% between September 2020 and September 2021, twice as high as the 5% increase in inflation during the same period. Similarly, according to RentHop, multifamily rental rates in multiple cities have gone up more than inflation. For instance, in New York City, the median one-bedroom rent increased 22% between September 2020 and September 2021.

Why did inflation rise so quickly in 2021?

Inflation rose by 41-year highs in 2021 for two main reasons:

The federal government injected the economy with huge amounts of capital in 2020 and 2021 to prop up the economy.

Due to staffing shortages, the cost of producing and shipping goods is up, contributing to rising prices on necessities such as gasoline, groceries, cars, clothing, and housing.

Between January and November 2021, inflation rose by 6.8%, the highest yearly increase since 1980. The Federal Reserve predicts inflation will normalize over the next two years, reaching 2.6% in 2022 and 2.3% in 2023. The graphic below visualizes how high inflation was in 2021 compared to previous years. 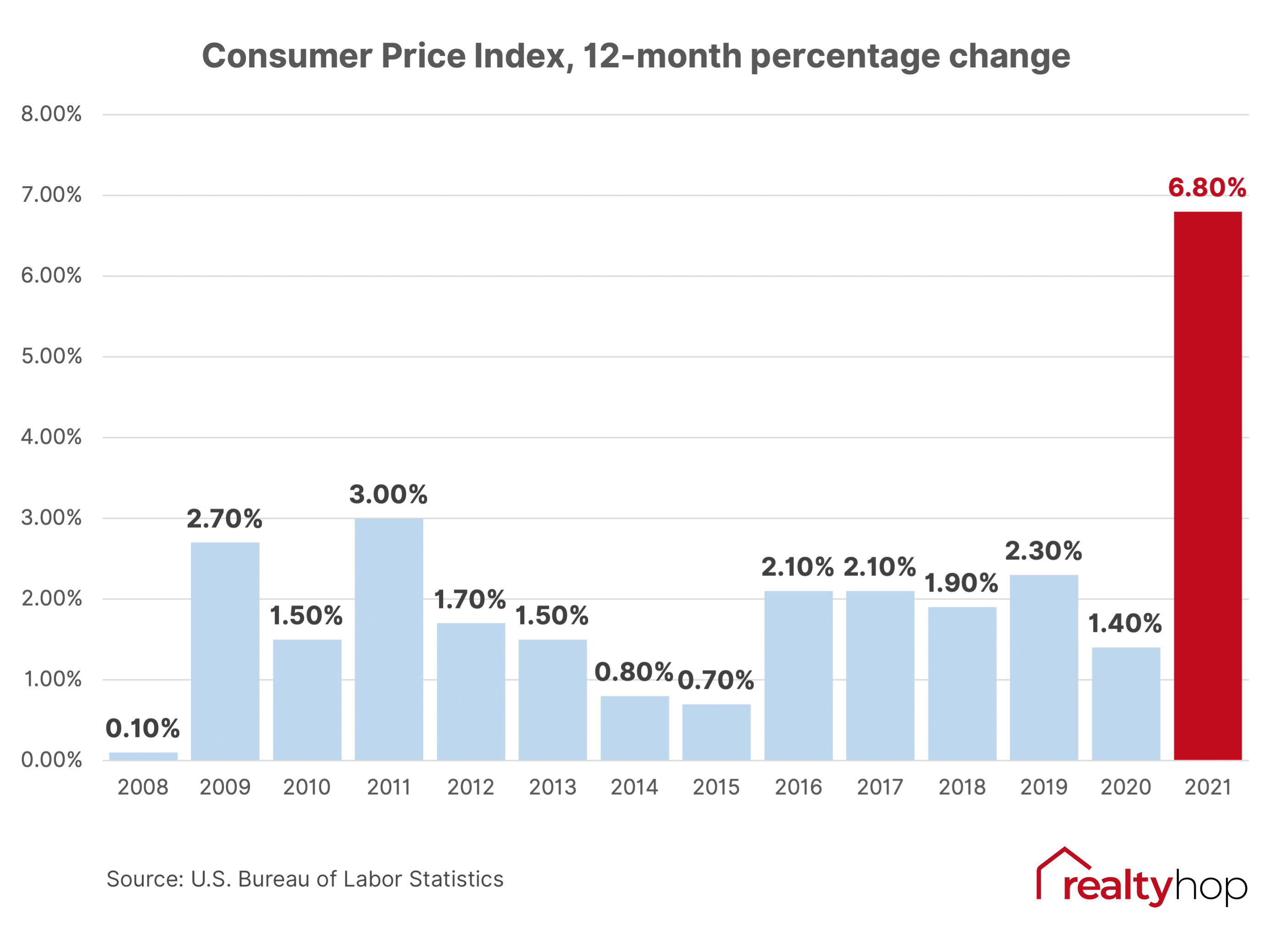 Is now a good time to buy?

While home prices have reached all-time highs in 2021 in several markets such as Boise, ID, Austin, TX, and Phoenix, AZ, now is still a good time to buy, as interest rates remain low. The Fed had signaled in December that, to ease inflation, it will soon raise interest rates starting March 2022. Prospective buyers who are looking to enter the market should seize the opportunity and lock the rate.