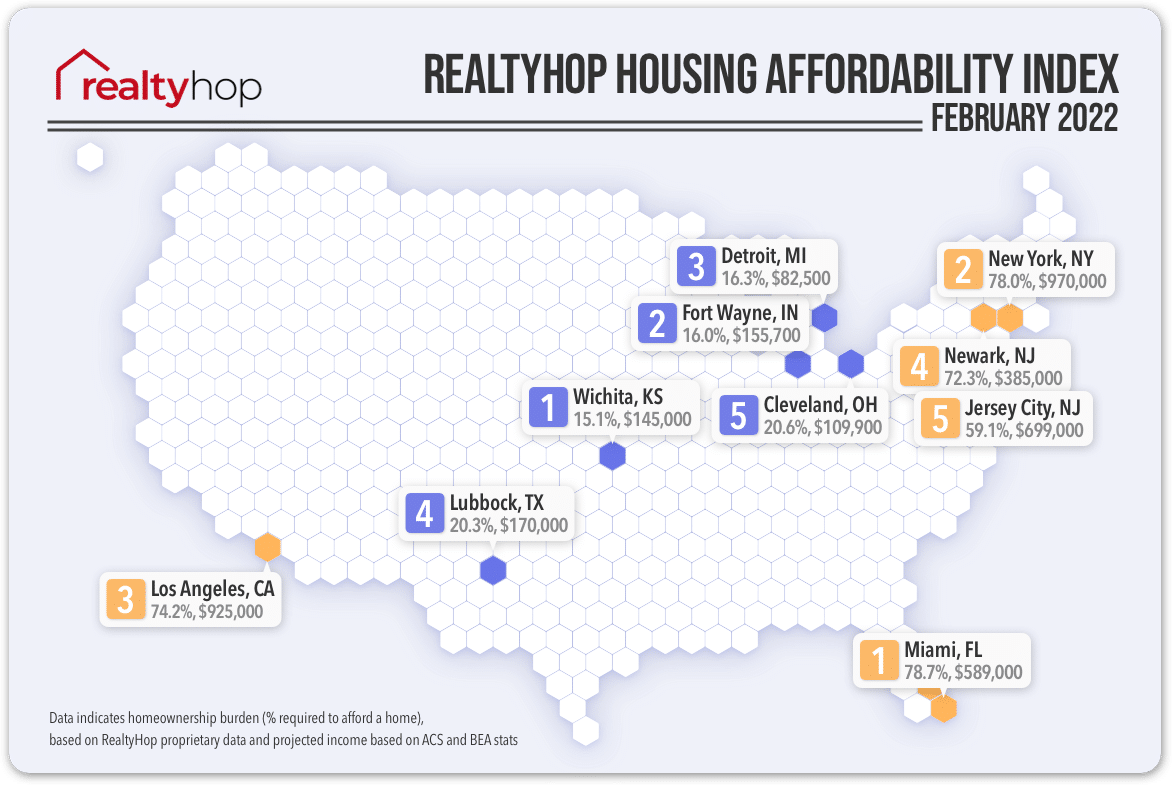 In this February edition of the RealtyHop Housing Affordability Index, we analyzed the least and most affordable housing markets in the 100 most populous cities in the United States using proprietary RealtyHop data and U.S Census data to find out:

This month, Miami passed New York City and became the least affordable housing market in the U.S. Read on to learn more about where your city stands.

Home prices in Miami has been on the rise since last year, and the trend has continued into 2022. The city has now moved up to be the least affordable housing market in the nation. Households would need to contribute 78.71% of their income towards homeownership costs, which is up 1.55% from last month.

New York ranks the second least affordable city this month, sliding off by one spot after being the least affordable city for seven consecutive months. Based on a projected median household income of $68,259 and median asking price of $970,000, a New York City household would need to spend $4,435 a month, or 77.98% of their income to cover mortgage payments and property taxes.

Los Angeles remains the third least affordable housing market in the country, with the median listing price falling slightly to $925,000. A family looking to buy a home in the city can expect to allocate $4,250 a month on mortgage and property taxes, which equates to 74.2% of their annual income.

Median real estate values rebounded slightly in Newark to $385,000 this month. An average family in Newark looking to own would need to dedicate 72.33% of their income to homeownership, up 1.32% from the previous month.

Another city in New Jersey makes the Top 5. Jersey City rose three spots and became the fifth least affordable market in the U.S. With an median home price of $699,000, a household would need to contribute 59.09% of their income toward owning costs.

Wichita remains the most affordable city in the U.S. Median home prices have been dropping over the last few months and are now at $145,000. The share of homeownership costs to annual income decreased by more than 3%. This means an average family in Wichita should set aside 15.05% of their annual income for monthly mortgage payments and real estate taxes.

Fort Wayne improved one spot on our affordability rankings and became the second most affordable housing market in the nation. Home prices are holding relatively steady in Fort Wayne, and average buyers can expect to spend $751.67 a month on mortgage and taxes. This translates to 15.97% of their annual income.

The median asking price for a home in Detroit climbed from $80,000 to $82,500 this month. Households in the Detroit area will need to set aside 16.26% of their income on homeownership costs, which is an increase of 3.12% from lats month.

For the second month in a row, Lubbock ranks the fourth most affordable U.S. city. Real estate values decreased again this month to $170,000, making it more affordable to own.  Based on projected household incomes of $55,747, homeowners will spend 20.33% of their income on housing, a decrease of 2.8% from last month.

Cleveland moved three spots to be the fifth most affordable market in the country. With a median home price of $109,000, average homeowners can expect to pay $591.92 per month on housing costs, which is 20.56% of their annual income.

Laredo moved seven spots this month and became more affordable. With a median real estate value of $230,500, Laredo homeowners can expect to pay $1,326 per month for mortgage and taxes.  Based on a median income of $52,587, that’s 30.26% of income spent on homeownership.

Lexington just got less affordable. Jumping nine spots this month, the median price to purchase a home is $268,000. The homeownership cost to income ratio rose 5.12%, and average homebuyers will now need to spend 23.45% of their income on housing.

Burden of homeownership increased 5.72% this past month, making it less affordable to buy a home in Sacramento. Buyers will need to now need spend 38% of their income on owning.

New Orleans also saw some changes over the last month. With a median home price of $290,000, New Orleans has become more affordable. An average family looking to own in the city can expect to allocate 36.15% toward homeownership.