At RealtyHop, we’re constantly trying to uncover trends to better understand real estate owners, renters, and market conditions. Along these lines, we’ve compiled our first-ever RealtyHop Annual U.S. Real Estate Survey, to help understand opinions regarding a number of topics related to real estate; these include views on rent versus buying, future plans for purchasing a home, economic effects of market conditions, and more. This month, we’ll explore a new subset of our data from the survey to help further shed light on the current state of the U.S. real estate market.

For this report, we’ll delve into the issue of homeownership in America. Over the past 70 years, homeownership has remained a core pillar of the American Dream. The recipe has been simple: get married, buy a house, have children, and retire comfortably. Yet, as tastes have changed and the average age of marriage has increased, many of these ideals have begun to look antiquated.

Millennials are migrating into cities at higher rates than ever before and renting for longer periods of time. Baby Boomers have swapped their owned homes in favor of rental housing to achieve greater freedom. In fact, according to the Harvard Center for Joint Housing, over the period of 1994-2019, the renter share among households aged 55–64 increased 4.2%.

We wanted to explore these trends in greater detail, so we surveyed a representative sample of users on both RealtyHop and our sister site RentHop. Our results shed light on the current sentiments regarding homeownership in the United States.

Key Takeaways from this Report

1) 77% of respondents believed that homeownership constitutes a good investment.

3) 65% of respondents who currently rent housing planned on purchasing a home in the next 5 years.

1. Homeownership as an investment

Survey respondents were presented with the statement “I believe that owning a home is a good investment”, and asked to respond on a Likert scale:

Despite shifting patterns in homeownership, the majority of respondents feel that homeownership remained a good investment. In fact, 76.5% either selected “strongly agreed” or “agreed”.

Only 4.6% of respondents felt that homeownership was not a good investment. 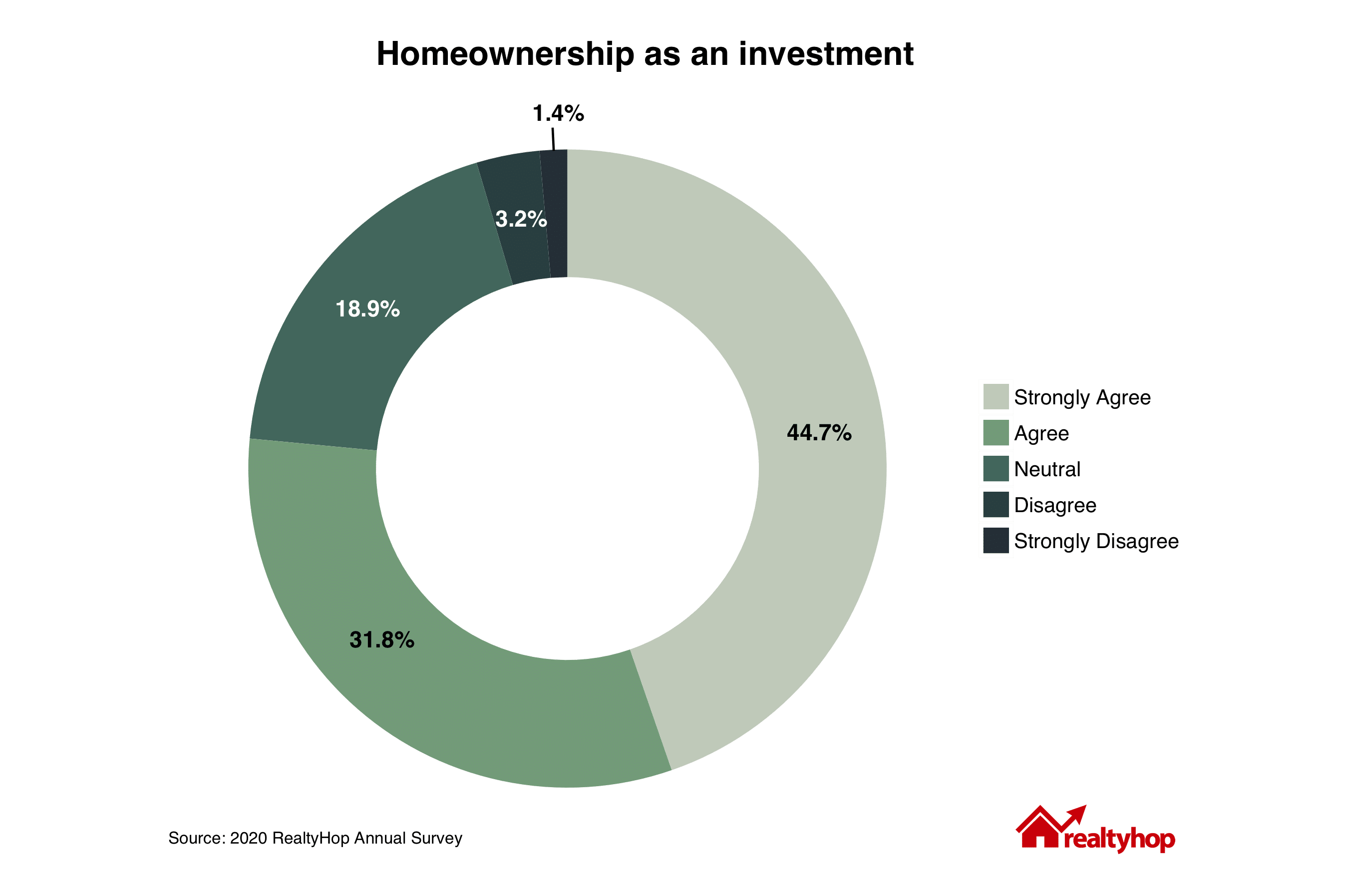 2. Views on the “American Dream”

Have views on the “American Dream” changed? To investigate, we asked the following question:

My idea of the American Dream includes the following”

3) Starting my own business

Respondents had the ability to select multiple answers from the above list, or enter in their own response.

“Creating financial wealth” was the most frequently selected answer at 76%, followed by “owning a home” at 71%, and “raising a family” at 63%. Starting a business, while still considered part of the American Dream for 36% of respondents, was the least selected response. 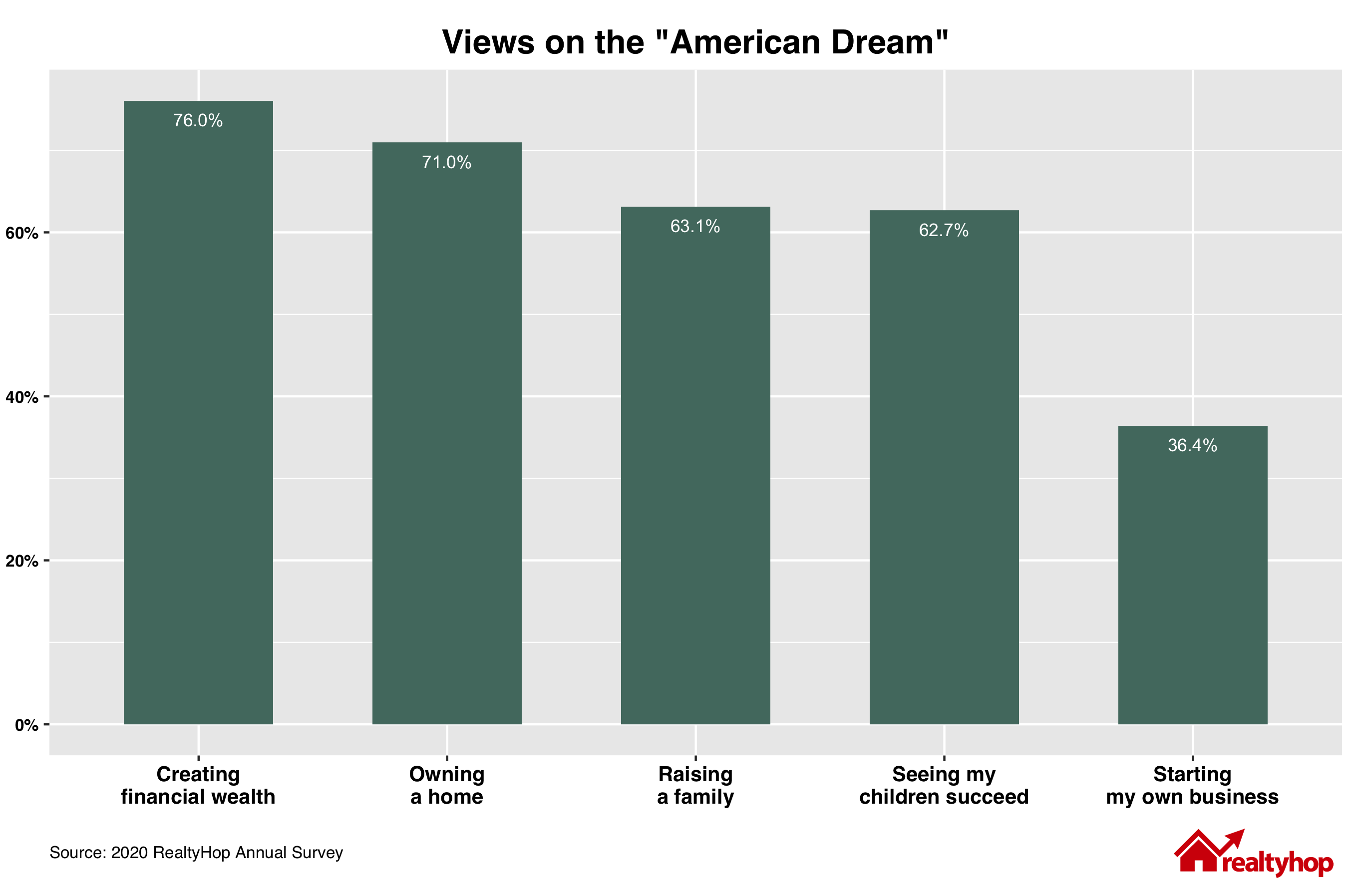 When responses were split up by gender, a fair amount of variation was seen.

Conversely, men were 30% more likely to feel that starting their own business, and 7% more likely to view gaining financial wealth, as part of the American Dream when compared to women. 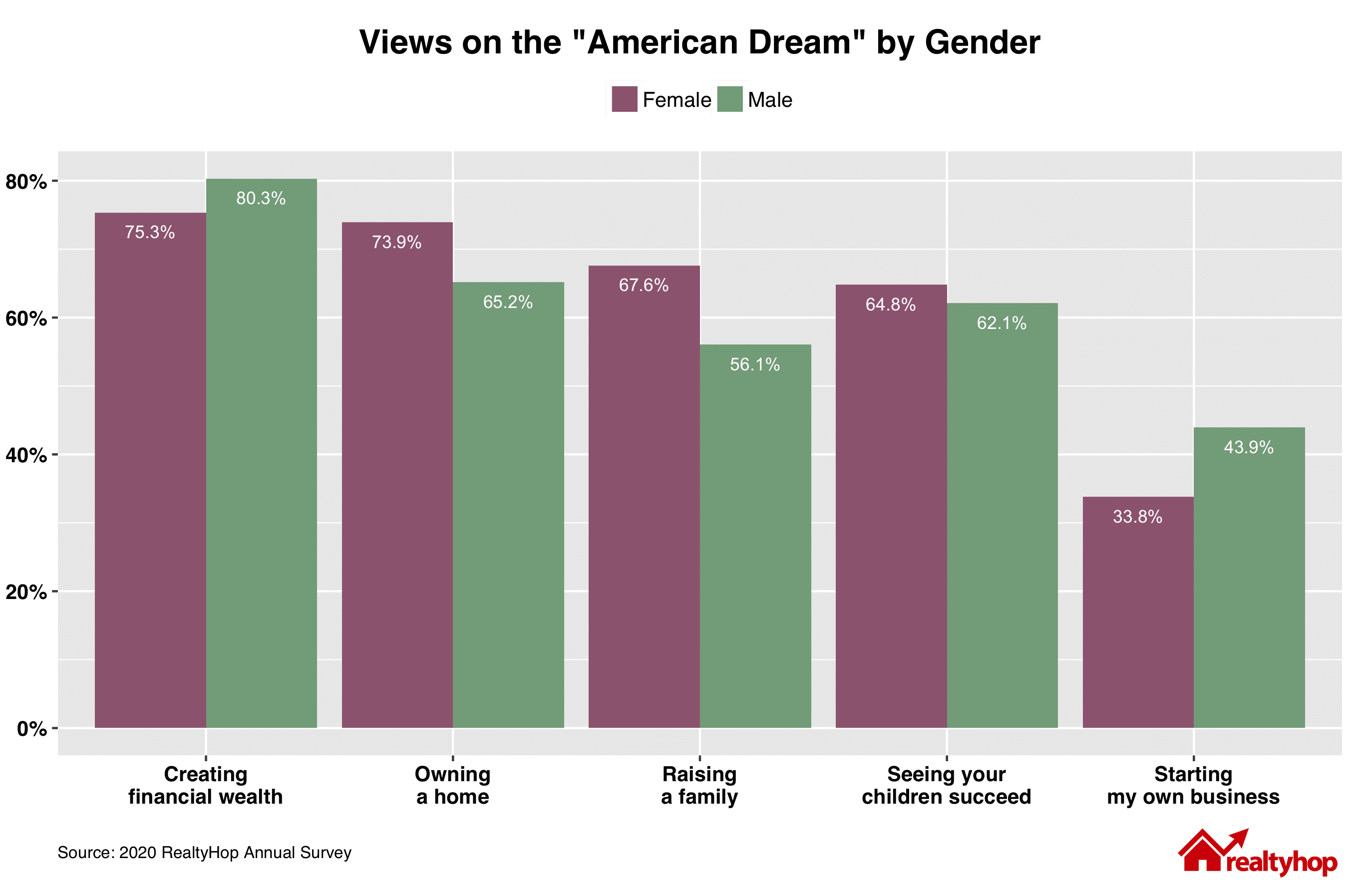 We also spliced up responses by income level. As a respondent’s income level increased, their opinions regarding homeownership as part of their American Dream decreased. In other words, those with more money were less likely to consider homeownership to be a component of their Dream.

One explanation of this trend could be that those with higher incomes already feel that homeownership is in their reach, and therefore not a stretch. 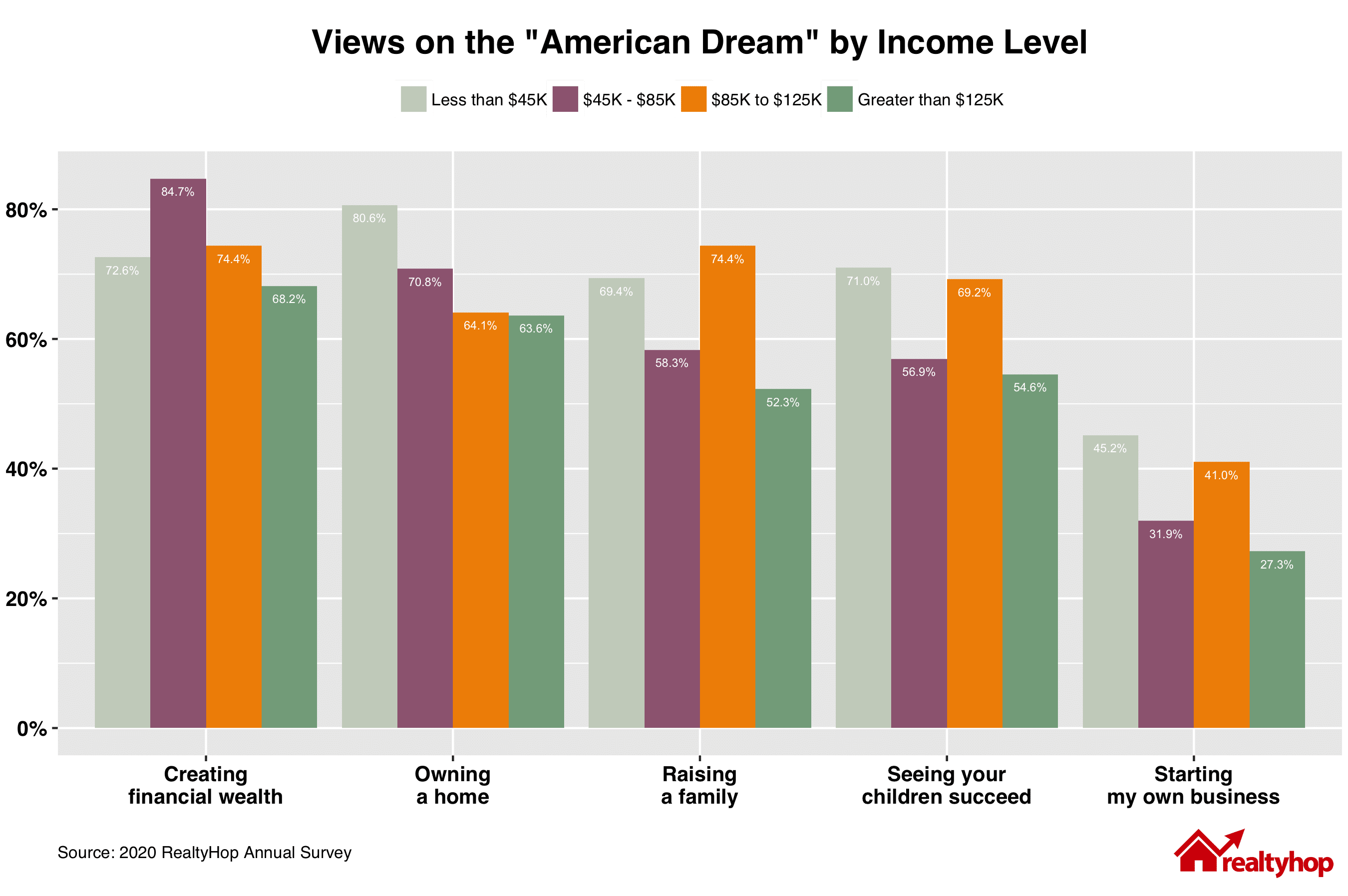 To investigate renting versus buying sentiments, we asked the following question:

“When do you anticipate making the move from renting to owning a home?”.

1) I currently own a home

2) Within the next year

5) I do not see myself ever owning

12% of respondents were already homeowners. 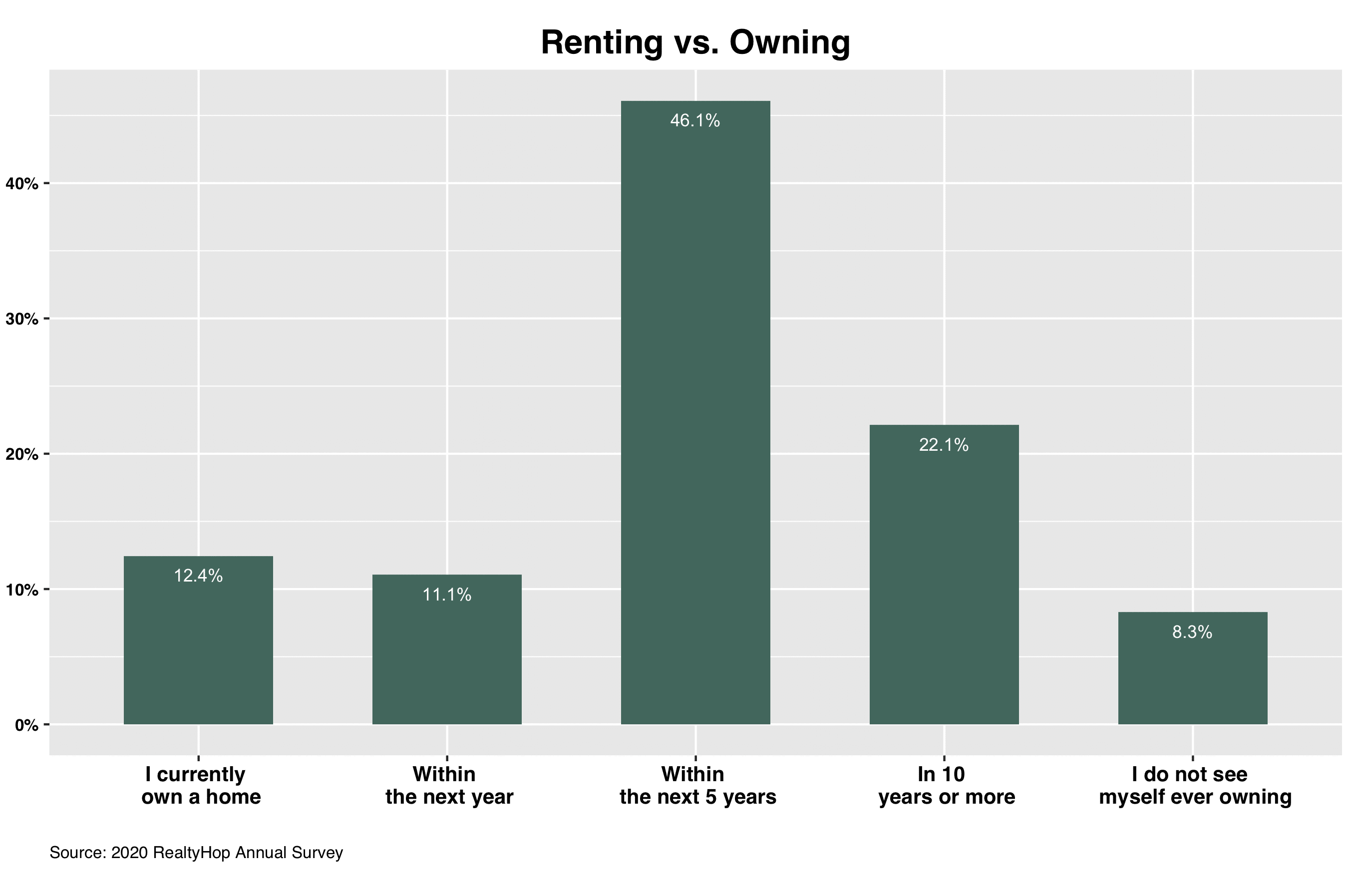 The RealtyHop Annual U.S. Real Estate Survey was sent to RealtyHop and RentHop users in June 2020. The group included both renters and homeowners, aged 18+ across the United States. A sample of 1,072 respondents at a 95% confidence interval was used to compile the dataset from which this report was generated. Respondents were presented with a series of demographic, housing, real estate market, affordability, and COVID-19 related questions.